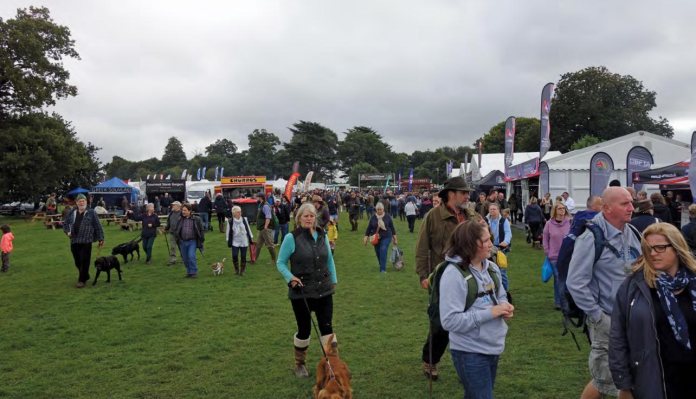 Over the last couple of years, I’ve been rather worried about the airgun content at The Midland Game Fair! I’ve been going for a couple of decades and I’ve seen Airgun Expo wax and wane over the years. There was a time when nearly every airgun company was in attendance and it was truly a sight to behold! However, in more recent times, there has been a steady decline in the number of airgun companies making the journey to Weston Park.

Airgun Expo and the ‘have a go’ range used to be at the top of Gunmaker’s Row and was right next to where the European Field Target course was set out. This was great, as everything airgun was in the same place but some people didn’t like the position, as they felt it was a bit out of the way.

The new position, at the bottom of Gunmaker’s Row was first used last year and seemed popular but there were only three large stands there, Air Arms, BSA/Gamo and Daystate/Brocock. I spoke to many people visiting the Midland that year who were disappointed with the airguns available to see and purchase.

For 2017, there was a better turnout, with ASI also down on Airgun Expo, with the range of FX and Crosman airguns and Hull Cartridge Company with Weihrauch. This made for a much experience for visitors and hopefully more will attend next year. So, what was new?

Well, shock horror! Nothing new from Daystate! Tony Belas always has something new to show me but he explained that what they have isn’t quite ready for the ‘big reveal’, so I guess we will have to wait until IWA or The British Shooting Show to find out what it is. He had gone one better than the other airgun companies in attendance, as not only was the range directly behind the stand but people could actually buy a rifle there and then from Solware!

Tony did have the new Brocock Compatto Target model on the stand though and I must admit that it didn’t look or handle any different from the original model! However, what makes it the ‘Target’ model is hidden inside, in the form of a precision Huma regulator that meters out a precision amount of air for each shot from the main reservoir. This ensures that the shot to shot constancy is improved when compared to the original’s already impressive output. Gone is the modest ‘power curve’, making for improved accuracy over a shot string. At around £700 it makes a great little HFT rifle and Mark Camoccio’s review is in this very issue!

This incredibly innovative air rifle company seem to have a steady stream of new models each year but one that has not really had much of a fanfare, is the Streamline. I guess it’s FX’s ‘entry model’ but the specification is anything but basic and is right up there with the company’s other rifles! The ambidextrous walnut stock has an elegant, raked grip and scope height cheekpiece and attractive panels of chequering on the grip and forend. The Streamline is however also available in a laminated stock as well as synthetic, so there’s something for all tastes. The Biathlon style sidelever activates the rotary magazine used on the majority of FX’s rifle and capacities are 13 in .177, 11 in .22 and 10 in .25. The fully shrouded SmoothTwist match barrel ensures top notch accuracy and a quick fill probe takes care of charging. At £849 I think this is one to watch and Edward King of ASI has promised me one for review, so watch this space!

The original TDR (Take Down Rifle) has been a great success for Air Arms over the years and utilises the action from the ever-popular S410. It breaks down into three main components but cannot be used without the butt section, therefore stopping it falling foul of the UK’s firearms laws.

Air Arms have been producing the S510 PCP with a sidelever action for many years and have now decided to use it on a revamped TDR- which is a very good idea indeed! The rifle still strips down as before but the rifle now has a shrouded (still Walther) 15½-inch barrel and comes complete with a screwoff Q Tec silencer. Available in .177 and .22, the shot count is an impressive 40 in either calibre and 2 mags come with each kit. The original model came in a soft case but the TDR now comes in a hard case with a foam interior that is pre-cut for all the components.

I used one of these new PCPs on the range and accuracy was superb of course and it’s bound to win many new fans, in fact one chap I met on the range (who’d sold his old TDR and regretted it) was going to buy one as soon as he could!

BSA’s Simon Moore is always good to chat with and showed me the gorgeous custom rifle that they have produced in collaboration with McAvoy Guns. Called the Firefly, it’s an R10 carbine in an attractive, multi-coloured laminate stock and a blue/grey buddy bottle. It really is a smart looking PCP and Pete Wadeson reviews one in next month’s magazine. Simon also informed me that there’s plenty of exciting stuff to come from the company soon but nothing I can tell you about I’m afraid! What I can say is that I can’t wait, and there’s one particular item that has been long overdue…

Gamo are now making the Maxxim Elite 10-shot break barrel rifle in a very nice black synthetic stock, which will make this cracking little rifle even more popular I’m sure and the popular Phox PCP, sold as a package with pump etc. is now made in .117 with a threaded barrel, not the moulded-on silencer found on the original, which gives more versatility.

Hull Cartridge’s attractive stand that features solid oak display racks, had a good selection of Weihrauch spring, gas ram and pre-charged pneumatic air rifles and pistols on display and Dave Mills and his ATEO team were hard at work introducing more people to the joys of airgunning.

Well, it was good to travel up to Weston Park again and I’m glad that Airgun Expo was better attended, it’s just a shame that I can’t say the same about the main Gunmakers Row…