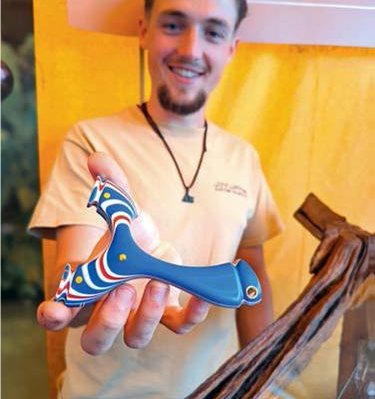 Held at Ragley Hall, Warwickshire on 29th-31st July, Game Fair 2022 attracted around 1,000 exhibitors and over 120,000 visitors spending some £60m on site. Although some major distributors and famous airgun names were absent, Highland Outdoors and the Sportsman Gun Centre had major stands, as did other leading gun shops. Britain’s best gunmakers were out in force, too, and there was an unprecedented array of thermal gear from Hik Micro, iRay, Pulsar and Thermtec.

Like many old fogeys, my experience of catapults is defined by Barnett Black Widows and accuracy levels suitable only for ground-baiting and barn doors, but it seems that a revolution has taken place while I wasn’t looking, and a new breed of shooters and makers is winning competitions and converts in equal measure. There can surely be no better example of this than John Jeffries, an international-standard shooter, keen hunter, and creator of some of the most effective, stylish and beautifullycrafted modern catapults I’ve ever seen. He has worked, and was displaying his wares, alongside knife-making maestros, Emberleaf. Deservedly. www.facebook.com/people/John-Jeffries-Custom-Catapults

We don’t see a lot of US hunting clothing in the UK, though Kuiu and Sitka have gained a following, so it was good to see Forloh making its début at the Game Fair. Represented by Texan huntress and influencer, Taylor Altom and by Guillaume Roques Rogery, who runs Château Laplanque, a stunning hunting estate near Toulouse, the range uses high-tech fabrics to create complementary layers, plus ancillary gear, that give adventurous hunters the versatile, highly-portable protection and concealment they need. There are ranges for men, women and kids alike, and items come in green, black, magnet grey, and ‘Snowfall’, ‘Exposed’ and ‘Deep Cover’ camo. Not cheap, but it looks properly good. www.forloh.com

Keeping company with Tom’s Targets, which make a great range of reactive steel targets for full-bore shooters, was The Airgun Target Company, which produces similarly diverse targets in 3mm and 6mm steel for use with sub-12 ft/lbs and FAC airguns. Whether the design is a gong, bunny, T-Rex or zombie, the emphasis is on durability, variety and fun. Targets come conveniently flat-packed, slot together easily and make intelligent use of magnets. My favourite was the oversized pellet catcher - perfect for plinkers who like a tidy garden! www. airguntargetcompany. co.uk

David McKay Brown is Scotland’s foremost maker of fine guns and is noted for offering some highly distinctive ornamentation. Most famous is his pheasant-feather pattern, which uses both deep sculpting and delicate engraving to reproduce the vibrant plumage of our handsomest game bird in guns that are designed for the most prestigious and demanding of driven days. Tastes may differ, budgets too, but artistry is always admired. www.mckaybrown.com

Highland Outdoors had just taken delivery of a batch of Mesa and Ridgeline centrefires, resplendent in carbon fibre, titanium and Cerakote, but the hottest item was the brand’s new baby: the Ranger. This is a super-handy turn-bolt chambered in .22LR, .22WMR or .17HMR. A packed spec-sheet announces an aluminium receiver with a steel recoil lug, an M1913 rail, a hand-lapped, threaded, carbon-fibre tension barrel with a match chamber, an ambidextrous carbon-fibre composite stock finished in black/grey or tan/black spider-web or Sitka Elevated or Subalpine camo, and a TriggerTech M700-style trigger. Best of all, it feeds from any Ruger 10/22-style magazine, making it the ultimate precision plinker! www.highlandoutdoors.co.uk

New optics brands are everywhere these days. One name I should have noticed before now is Arken. Distributed here by Highland Outdoors, Arken’s scopes are designed in the USA and assembled in China with Japanese glass. All models have big, grabbable, super-readable turrets, 34mm main tubes and illuminated first-focal-plane reticles in MRAD or MOA versions. Choose between SH4 (4- 16x50 or 6-24x50) or the new premium EP5 (5-25x56) models. Direct-selling domestically keeps Arken’s US prices super-low, but the evident quality of these scopes makes them great value, even at UK retail. www.highlandoutdoors.co.uk

New from Rigby is a deluxe limited edition of the 1872 Farquharson falling-block rifle. Chambered in .416 Rigby, it features a 25” lightweight barrel with an integral rib, a custom-fitted stock in grade-7 Turkish walnut, a 1” rubber recoil pad, a silver stock oval and Rigby’s best London oiled finish. The action is ornamented with deep-relief Rigby ‘Rose & Scroll’ under a colour casehardened finish, or as the customer wishes, while a grip cap with a serialised blue enamel centre crafted by Melissa Rigby, a descendant of the firm’s founder provides a final flourish. www.johnrigbyandco.com

Also at Highland Outdoors, I had my first look at Nosler’s M21 bolt-action rifle. Configured for active hunting, it weights around 7lb and comes in 12 chamberings from .22 Nosler to .375 H&H Magnum. Features include a modified Mack Brothers EVO action, threaded 22”/24” sporter-weight barrel, nitrided spiral-fluted bolt, a carbon-fibre, pillar-bedded stock with a straight-comb and raked grip, a 3/4-shot floorplate magazine and an externally-adjustable Triggertech trigger. The barrelled action has a silver-grey Cerakote finish that contrasts pleasingly with the stock’s textured black-granite coating. All in all, a handsome, handy rifle from a company with a name for accuracy. www.highlandoutdoors.co.uk

Fine Shooting Accessories have everything you need to feel that vital smidgen posher than the person on the next peg, or even to flex on the shoot next door. If an ostrich-leather wellybag for almost a grand will fill that hole in your soul, they have it. Fancy a bespoke, leather-faced elevenses box from Thewlis Gregson, makers of the smartest vehicle storage systems money can buy? Look no further. Or just settle for the cartridge-bagstrap equivalent of your old-school/ regimental tie, or simply a very nice pair of shooting gloves. You get the picture, plus Christmas is coming! www.fineshootingaccessories.com

William Powell’s fruitful relationship with the family firm of Battista Rizzini, arguably the best of Italy’s mid-sized gunmakers, has long provided British shooters with stylish, well-made and well-priced O/U guns, from the gateway Perdix to the bespoke Pegasus, by way of the round-bodied Phoenix and the high-bird Prestige. More recently, the benefits of their collaboration have been extended to side-by-side aficionados with the launch in 2020 of their side-plated Sovereign and sidelock Viscount models, now available in 12, 16 and 20-gauge. The desirability of Powell’s Battista Rizzini guns is further enhanced by the fact that they all come ‘future-proofed’ for High-Pressure Steel. www.williampowellgunroom.com

French cartridge manufacturer, Vouzelaud has a unique asset when it comes to creating effective steel loads: a cunning biodegradable wad that safely channels steel shot through tight chokes, delivering killing patterns at range without the need for superior steel proof. Vouzelaud’s patented Greenwads also sink in water and contain an animal-repellent compound to prevent ingestion by livestock, whilst their tin-plated shot won’t rust in damp storage conditions or in lardered game. Naturally, such benefits don’t come free, so - as sold in the UK by Charles Lancaster- their ‘Live Quarry’ 12-gauge offerings (67mm No4 or 70mm No3) cost about 90% more than budget bio/ steel loads. Far cheaper than bismuth, though.www.livequarrysteel.com

An invitation to Optical Solutions’ stand, courtesy of owner Cliff Ray, provided an introduction to the latest range of thermal devices to hit the UK market. Cliff’s Cyclops monoculars and Ares riflescopes come from Thermtec, a Chinese firm specialising primarily in security optics. 3-Series and 6-Series models have 384x288 and 640x512px 12um sensors respectively. Monoculars come with lenses in 4 sizes (15/25/35/50) and riflescopes, in 35mm or 60mm formats, the latter boasting a clever dual optical zoom for enhanced performance at range. Unique across the brand is an AI rangefinder that uses security-camera technology to identify and scale familiar objects automatically! www.opticalsolutions.uk

Hot off the boat on Infiray’s imposing stand was the new ZH50 Zoom thermal monocular. Its radical duallens 25/50mm objective lets you switch from 2.2X to 17.6X optical magnification at the twist of a dial. All while maintaining the full resolution of the big 640x512px 12um sensor. The FH50’s attractive specification also includes a 1440x1080 FHD OLED display, two swappable 10-hour battery packs and shutter-less calibration. www.highlandoutdoors.co.uk/InfiRay/

Shooters are rightly getting a bit hot under the collar at the prospect of a lead ban. (Object to it now via the Home Office REACH consultation if you haven’t already!) But if everything does go tits-up, at least shotgunners can take heart from Bioammo. As well as producing loads with the only truly biodegradable plastics on the market, they have just launched a “Blue” version that supplements their steel and lead offerings with a proprietary lead-less alloy shot. Yes, there’s a price premium, but it’s not offensive, and as output grows the cost-per-round is sure to come down. I’ll be getting some soon and look forward to seeing how they perform on the pattern plate and in the field. www.bioammo.es

Pulsar distributor, Thomas Jacks do a sterling job of keeping me abreast of their ever-evolving product range, but only at the Game Fair did I get hands-on with the new Merger XG50 LRG bi-ocular, the successor to the peerless Accolade, itself the gold-standard for sustained and detailed thermal observation in the hunting field. Mergers are to Accolades what Thermions were to Trails: cuttingedge tech installed in a familiar body shape and with everything else enhanced in the process. A long chat with Pulsar’s Head of Marketing also gave insights into the intense dynamism of their R&D, as well as their impressively principled and philanthropic response to Ukraine’s invasion by Russia. www.thomasjacks.co.uk

Vass Technology brings cutting-edge Electric Vehicle (EV) technology to iconic cars, extending their lifespan, increasing reliability and performance, and eliminating emissions. Focusing on Land Rover Defenders and Porsche 911s, and using top-spec subsystems sourced from leading EV names, Vass have all the design and fabrication skills to take each project from initial concept to final realisation. They work closely with their customers in a bespoke process that identifies the ideal combination of components, performance, range and conveniences. In their own words: “It’s not just about a smaller carbon footprint, it’s about making iconic vehicles even more exhilarating and reliable than the day they left the factory.” www.vasstechnology.com

Fortis is a UK company that makes rugged, practical, no-nonsense outdoor gear. Something of theirs seems to catch my eye at every show. This time – maybe it was Friday’s scorching weather - it was a ‘safari-suit’ comprising a pair of Ranger Shorts and a short-sleeved version of their excellent Field Shirt. As usual, all the details of the design have been thought through to give maximum usability with minimum fuss, and the execution is characteristically thorough. And for those of us not going on safari or anticipating a permanent UK heatwave, fulllength versions of both items are also available. www.fortisclothing.co.uk

You don’t need to spend a fortune to acquire a gun with abundant character, just step back in time and look for a classic black-powder muzzle-loader. I found splendid examples by Purdey, Boss, Lancaster and Ancell on Francis Lovel’s stand. The Lancaster, a 14-gauge with flamboyant scrollwork and pineapple finials, English gundog engravings and pristine platinum vent plugs was almost too charming to resist! Francis is a connoisseur of vintage guns, an expert buyer, and an aficionado of muzzle-loading game shooting, so just the man to go to if this sort of thing puts a sparkle in your eye. www.francislovel.com

Atkin, Grant & Lang are something of an unsung name in the world of fine British gunmaking, but they combine truly first-class work with a deft sense of style, and their Stephen Grant roundaction O/U is simply gorgeous. The quality of their work is also displayed to impressive effect in the big-bore double rifles and Mauser-98-actioned magazine rifles bearing the Joseph Lang name. If you’re after a bespoke African rifle, or just want to understand what that should mean, AGL has some persuasive answers. www.agl-uk.com