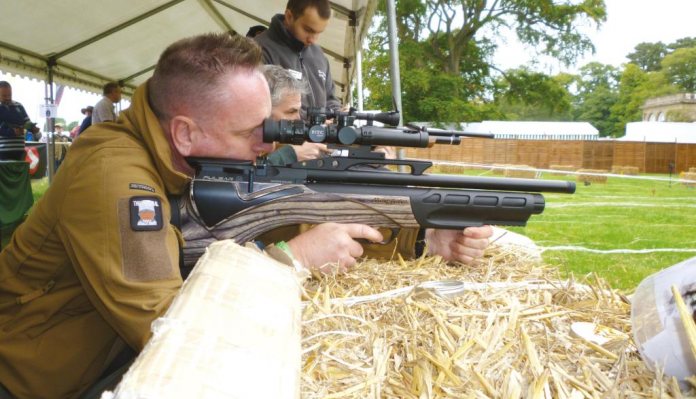 Well, that was a bit disappointing! I’ve been going to the Midland Game Fair for the last 21 years and only missed one due to ill health; even the national petrol tanker driver’s strike in 2000 didn’t stop me driving 180 miles to get there.

This year’s Airgun Expo was sadly a rather lack-lustre affair, with the least amount of airgun related stands at the show that I’ve ever seen. Only Daystate/ Brocock, BSA/Gamo and Air Arms had dedicated stands and the actual area that Airgun Expo covered was very small compared to previous years. I don’t know the actual reason for the demise but it’s probably a combination of factors; such as the cost of actually hiring a pitch, staffing and hotel costs etc, the state of the wider economy and the number of shows that are currently on offer around the country throughout the year. The level of theft from stalls must also have a detrimental effect for anyone with a stand.

The show was still fairy busy however and I still managed to see plenty of new gear to write about, so, let’s get on with it! The BSA stand had a really nice display highlighting the company’s heritage and there were examples of several of the classic fullbore, rimfire and spring piston air rifles that made the Birmingham-based company its name. As far as modern airguns are concerned, there was an extremely nice looking limited edition Scorpion SE that is available exclusively from Ronnie Sunshine’s shops.

It features a Goldstar-style laminate stock with an adjustable cheekpiece and buttpad, a chromed trigger, trigger guard and muzzle brake, a name plate that the purchaser can have engraved, two magazines, a silencer, gunbag and a 4-12 X 44 AO scope! All that for a bargain price of £799. I’m sure these package deals will sell very well indeed, as you certainly get a lot of bang for your buck.

The BSA/Gamo collaboration that is the Coyote PCP is selling well and I’m sure the new synthetic stocked version will prove to be popular as well. The action has a rotary 10-shot magazine, a silencer bonded to the barrel and the ambidextrous butt has an adjustable cheekpiece; at only £399 it will be just the thing for those shooters who require a robust, accurate multishot air rifle.

The new synthetic stocked Pulsar is as stunning as its predecessors and it’s a real beauty that comes up to the shoulder like it grew there. The action features the standard 10-shot magazine and has a 300cc air reservoir, which enables the rifle to produce around 200 shots in .22 and 180 in .177. The 17” match grade barrel will produce excellent accuracy and the match trigger will ensure the pellet hits the target every time. The stock houses an in-built laser that can be turned on when the safety catch is turned to ‘FIRE’. There’s even an in-built spirit level on the stock behind the action to reduce canting! The sidelever can be swapped from right to left very easily, so lefties can adapt the rifle.

The new Compatto (which is Italian for compact) is a semi-bullpup PCP, which means it’s not quite as compact as a full on bullpup but very, well, compact, nonetheless. The synthetic stock has an upright thumbhole layout with a cut-out in the butt to reduce weight, an adjustable buttpad and a Picatinny rail under the short forend for mounting a laser, bipod or torch. The 10-shot rotary magazine is similar to that found on a Daystate PCP and is said to be more reliable than the older style feed system! The valving is of the ‘slingshot’ design, which improves efficiency and consistency and the shrouded Lothar Walther barrel has a ½” UNF thread for mounting an auxiliary silencer if required.

There is a very handy power adjuster on the side of the action and power can be set for 6, 9 or 12 ft/lb, so is perfect for shooting in and around farm buildings where full power isn’t needed. The Compatto will be available in .177, .22 and .25 calibres and is going to be in the shops around November and at £585 it’s a lot of rifle for the money.

Deben have always been into lamping and do not disappoint! The LedRay F600 Focusable Quad Colour Gunlight is fairly self explanatory and can be altered from white, red, blue or green by turning a dial on the outside of the unit, a bit like the magnification of a telescopic sight is altered. There are three power levels plus a strobe and the unit is turned on via a push button or a remote switch. When the colour is changed, the beam position shifts slightly, so the designers have come up with a bespoke mount that can be quickly adjusted to re-position it to correspond with the target. Power comes from a rechargeable battery and there is an extension that can be screwed to the front of the torch to minimise overspill of light and concentrate the beam. The entire kit comes in a plastic carry case with all the accessories. Priced at £129.99, the F600 is competitively priced.

LAST BUT NOT LEAST

Sandwell Field Sports had a few new models from the Armex range of air rifles on their stand, called the ‘Armex Black’ range. The Rotex Black has a soft touch feel synthetic stock and is around £469.95. The Maxus Carbine Kit is a Terus spring piston rifle that has a carbine length barrel fitted and comes complete with a 3-9 X 40 scope, mounts and a silencer, good value at £269.95 Optisan Optics (on the Daystate/Brocock stand) had some new offerings that will be available soon and the EVX Series have 30mm tubes, a new style of multi-aimpoint reticle, locking turrets and sidewheel parallax adjustment. There are the following scopes in the range- a 3-12 X 44, a first focal plain 4-16 power model, a 5-20 X 50 and a 6-24 X 56. Prices aren’t confirmed yet but I‘m sure they’ll be competitive.

Dave Mills was busy on the ATEO range but still found time to show me some of the new products he is importing. The Tesro range of pre-charged pneumatic target rifles and pistols from Germany have been selling well and Dave gave me a PA10-2 Compact pistol (price €1,129) to try and it’s very well made with an ergonomic wooden pistol grip and I can’t wait to get it to the range. Dave also has the Tesro PCP rifles starting at 1,699 Euros and rimfire models from 2,600 Euros.

The new target shooting training system Dave will be importing can be fitted to any fullbore, rimfire or air rifle or pistol and allows the user to do dry fire practice, so saving ammunition and as no projectile is fired, it can be used at home or in a garage. The unit plugs into a laptop and gives a read out of the shot, before and after firing, so the user can analyse their technique. The sensor itself fits into the gun’s muzzle using one of the supplied calibre-specific inserts; then, when the unit senses the action being dry fired, it displays the shot on the laptop’s screen. It’s a very clever item and at around £500 is keenly priced.

Dave and I struggled a bit but we eventually got him into his new, tailor-made Sauer shooting jacket. It’s obviously made to be a snug fit, as it is designed to help support the body whilst competing. Sauer can make up a bespoke leather and canvas jacket/trouser combination in a wide range of colours for around £900 per outfit.