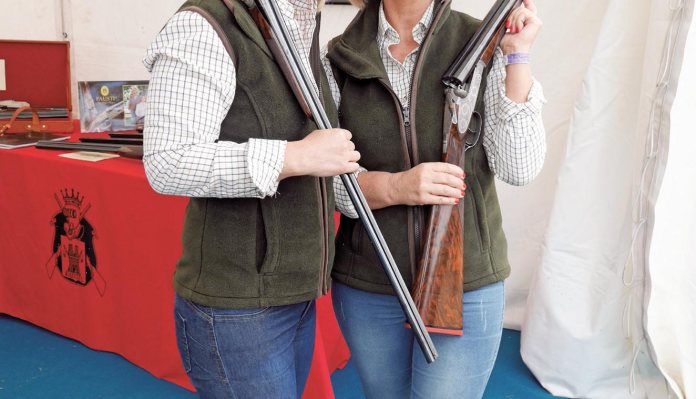 No year has offered English shooters more events than 2016. The British Shooting Show opened the batting strongly in February; the Northern show made a distinctive new mark at the crease in May; and the Midland is still there to bring the season to its close in September, but the demise of the grand old CLA Game Fair left a hole in the main summer calendar that saw no fewer than four new players vying for their place in the sun.

First there was Field & Country Fair, held mid-June at Cornbury Park, Oxfordshire: a small-scale, high-quality do, whose appeal even the rain couldn’t dampen, and which is set to run again in 2017. Then there was the UK Game Fair, promoted by Blaze Publishing and scheduled for the third weekend in July. It never quite gained the traction it needed and ultimately succumbed when Blaze was sold and its new owners, Future, pulled the plug.

Next came the BBC’s own stab at showcasing rural life: Countryfile Live. The setting, at Blenheim Palace, couldn’t have been grander, with plenty of interesting and fun things to see and do, and BASC and the NGO there too; but as the event toes the general BBC line of – at best – airbrushing field sports from its image of the countryside, you won’t be reading a report of it in these pages.

This leaves us with The Game Fair, held this year at Ragley Hall, Warwickshire on 29th - 31st July. I think it was always fair to see it as the heir-apparent to the CLA – there was continuity in the organising and publicity teams, and in the venue, and there was a general feeling among exhibitors wondering where to put their money that this familiar formula was the safest bet.

Call it what you will, the 2016 Game Fair felt more spacious, and more relaxed than its CLA predecessors, yet there was still heaps to see and to do, and ample shopping opportunities to be had. I attended all three days without a dull moment. Naturally, most of my time was spent catching up on news and new products on Gunmakers’ Row, but with all the demonstrations, competitions, discussions and learning opportunities on offer in the Main Arena, on the Gun Line and the Airgun Experience, in the Bear Grylls Survival Academy, and in the Main and Cookery Theatres, and with all the gastronomic delights to be had in the Totally Food area, even what missed would probably have been enough to have kept me entertained, fed and sozzled, for a week!

Also worthy of note was how smoothly the event was run. Whether the challenge was marshalling thousands of cars – over 107,000 people attended the show over the three-days – emptying bins – I didn’t see anyone drop any litter or fail to pick up any dog mess – replenishing supplies – bars and food outlets kept serving what customers wanted – even a toilet crisis – a whole toilet block had to be closed and facilities re-assigned on Friday – everything just got done without the least fuss or drama. Security was really low-key too, yet the showground felt like a very safe place to be.

The only frustration was that people with EE phones couldn’t get a signal of any kind. Apparently this was due to EE being less amenable than other networks when it came to agreeing a service deal with the organisers. So, if, like me, you had this problem, let EE know you’d like them to keep up with their competition in future!

On that note, the fact that the Game Fair has signed a six-year deal with Ragley Hall and Hatfield House in Hertfordshire means that each location will shortly be equipped with a below-ground fibre-optic network providing highspeed broadband in the busiest parts of the showground. Simply put, the success of this year’s show means that many potential exhibitors who sat on the side-lines this year must be thinking seriously about joining the party in 2017.

It would be great to see Blaser Sporting, Browning-Winchester, Edgar Brothers, RUAG and Viking Arms all in one place, and I’d love to see all the big names in optics standing sideby- side on a monster version of the brilliant viewing range Zeiss pioneered at the Northern Shooting Show. But maybe we shouldn’t expect any one event, even The Game Fair, to do it all.

What set the old CLA apart, for me as a shooter, was the opportunity to see (always), to handle (often), and to discuss (frequently), the finest guns made in Britain with some of the people who actually make them. It doesn’t matter to me that I can’t afford to put one in my cabinet, let alone start a collection: they are still a rich source of interest and pleasure.

As for guns, there was no denying that the Game Fair remains the natural habitat of the shotgun, and indeed of the classic gun in general. The racks and tables of John Bradshaw Guns, Carl Russell & Co., Francis Lovell, Giles Marriott Fine Guns, Gilsan Sports, Ladds Guns, The Oxford Gun Company, and many more, collectively displayed an extraordinarily wide selection of new and second-hand guns for sale: from current US and European models to classic British names – some famous and some obscure – and at prices that ranged from the instantly affordable to the downright ‘aspirational’!

Above all, though, the Game Fair lets you see what the country’s best gunmakers have been making for their customers. They were a little thinner on the ground this year than at the old CLA: Holland’s, Purdey’s, and William & Son had stayed at home; and E.J. Churchill and William Evans had left their stands behind. Though to be fair, Churchill’s were running a Gun Line over 500-metres long! So it was no small compensation to find that Boss were making their first visit, accompanied by well over three-quarters-ofa- million-pounds-worth of the finest guns on the planet!

All present-and-correct too were Longthorne and Boxall & Edmiston, two young companies, each dedicated to achieving the perfect marriage of modern technology and traditional craftsmanship, and each with its own distinctive approach and style.

Also forging forward are Atkin Grant & Lang. I had the privilege – and thrill – of shooting a numbered pair of brand-new Stephen Grant side-by-sides recently, double gunning in a genuine stone grouse butt, and uncharacteristically dusting the seemingly-endless stream of clays speeding out of the mist and across the heather, as if to the manner born (in my head at least!). That’s the thing about great guns: they seem to shoot themselves!

The owner had tipped me off about a new over-and-under too, so at the Game Fair I made a bee-line for AGL’s stand, where master gunmaker Alan Bower showed me the firm’s latest creation. The first Stephen Grant over-and-under is beautifully made and very handsome, but Alan emphasised that first-andforemost it is designed and built to shoot, and to last. In fact, the current gun is a kind of test-bed, a stimulus for ideas for creative dialogue between gunmaker and customer.

These lofty heights are far from being the only places of interest in the shooting landscape, of course, and neither is that landscape exclusively English, as I was reminded when meeting Barbara and Giovanna Fausti on the Stephano Fausti stand, and Vincent Chapuis on the stand of Stephen & Son, one of Chapuis Armes’ principal UK dealers. Both these firms offer fully or semi-bespoke ‘artisan-made’ guns, as well as very presentable production-line models.

In Chapuis Armes’ case, I recently tested a ‘standard’ C35 Super Orion costing just £2.5K, whose build and finish impressed me so much that I tried to find something from another maker to match it… and had to double my hypothetical budget to do so! The fact that master gunmaker Stephane Dupille of Stephen & Son hosted Chapuis on his stand speaks volumes for their quality.

Fausti Stephano, meanwhile, has raised its sights, giving new prominence to the expertise of its artisanal atelier (now dubbed the Fausti ‘Boutique’) and making its new pitch to the UK market at a correspondingly higher level. At the point of this new upwards thrust is the firm’s elegant roundbodied Italyco over-and-under. Already available in a side-plated SLX format, for 2016 Fausti are offering it with the plates handengraved, in a choice of three styles, and signed by master engraver Stephano Muffolini. The designs are undeniably lively, but my personal preference for colour case hardening and fine scroll remains intact. Fausti, and Muffolini, do these too; of course, though the colour created by Fausti’s ‘bone & charcoal’ method is typically flamboyant.

Also extending their range upward are William Powell, whose new Zenith Supreme sidelock side-by-side gun is hand-finished in the UK. Powell’s make no secret of the fact that they source their side-by-side guns from Arrieta in Spain and their over-and-unders from Battista Rizzini in Italy. It’s not just a re-badging exercise, however, as Powell’s have an active and creative working relationship with their Spanish and Italian partners that gives their range a distinctively British character and marries surprisingly modest prices to reliably high standards.

Powell’s also include an individual gun-fitting service in the price of many of their guns, and it is always available as an option. I didn’t have a gun fitted until somewhat late in my shooting career but I am now an absolute convert. Fitting does a huge amount to foster a consistently correct mount and ensures that you work with your gun rather than against it. It takes time and a good eye to learn how to take a customer’s measurements too, so it’s crucial to go to a firm like Powell’s that makes a speciality of it.

Last But Not Least

The Magic Bore shotgun cleaner was developed by clay shooter Mike Bartlett, made in the UK, and launched at the Game Fair; it lets you clean your shotgun barrels quickly but thoroughly – plastic fouling included – and without getting your hands dirty. The system consists of a rod covered in a blue micro-fibre material, with a system-specific bronze brush at one end and either an aluminium handle or a hexagonal spigot at the other, depending on the model chosen. The brush will attach directly to the handle for cleaning chokes or chambers, and the spigot fits an electric drill for an even more energetic clean than can be achieved by hand.

A polymer tip on the brush and a bushing ahead of the handle/spigot mean no metal parts other than the bristles of the brush come in contact with the bores, so you can even clean semi-autos and pumps without removing the barrel. The system ships in a sturdy storage tube, too, so there’s no need to handle the cleaning rod directly, and when you’ve finished the rod simply goes back in the tube, keeping everything else clean. The rod sections can be cleaned, but are essentially consumables and are designed to be cheap to replace. The Magic Bore costs £60 for the hand kit and £45 for the drill kit and is currently available in 12g and 20g. The drill kit is ideal for cleaning heavily-fouled bores at home, whilst the hand kit is great for field use. As one forum poster commented: “It’s perfect for loaders and game shooters who wish to give their guns a very quick but quite thorough clean before heading off home… and only the cost of two pheasants”!