Airguns at the British Shooting Show 2018 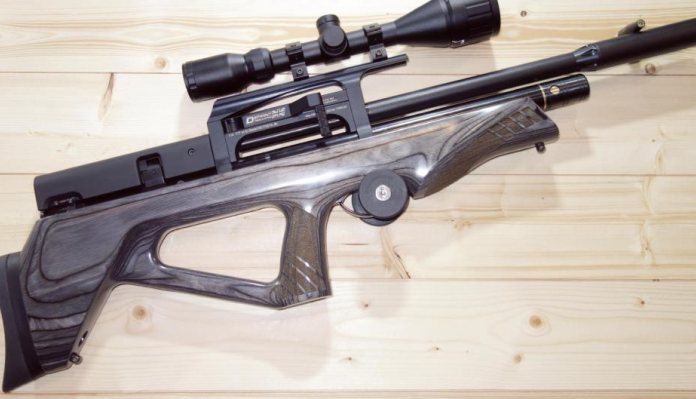 Well, that was rather nice! The National Exhibition Centre, Birmingham is the new venue for the BSS and what a change from previous years. I’m a huge supporter of the show and was at the first one in Newark; it then moved to the National Agricultural Exhibition Centre in Stoneleigh. As you’d expect from the name, Stoneleigh was a rather basic sort of venue, so the NEC is light years away in term of comfort, fit and finish. On entering, it had the feel of IWA in Nuremburg, Germany, which is praise indeed. The high ceilings certainly helped and the light and airy feeling was welcome. Okay, so that’s a thumbs up from me (and everyone else I spoke to!) so what was new in airguns?

Well, for me, the launch of a bullpup from BSA Guns made the show! Now, I’ve been gently ‘cajoling’ BSA’s management to produce a bullpup for quite some time now. Okay, I’ve almost demanded that they join the bullpup PCP air rifle arms race and I’m sure many others have too; so, seeing the Defiant in the flesh, handling it and shooting it on the range was bliss! I know, I’m going on a bit, but I really was that pleased! The ergonomics are spot on, with a slick, spring assisted sidelever action that’s fitted with a regulator, 10-shot magazine, shrouded and silenced hammer forged barrel and a choice of three stocks (soft touch black, walnut and the lovely ‘black pepper’ laminate) with everything fitted in a hard case. It shot superbly and with around 110 shots in .177 and 130 in .22 it’s bound to sell well at £1049 for the walnut and soft touch and £1099 for the laminate. By the way, after customer feedback, the scope rail has been lowered by 11mm, so it’s great to see BSA responding to comments. Look out for a review soon. I also loved the classic BSA motorbikes and the ‘Peaky Blinders’ looked pretty cool too!

Derek Edgar showed me a whole range of new air rifles, including the Hatsan Flash multishot PCP with a synthetic, thumbhole stock with a shrouded barrel. There’s also the Flash Pup bullpup with a short throw sidelever action, shrouded barrel and ergonomic wooden stock and inbuilt silencer. The Proxima was also neat, a multishot under-lever gas ram rifle with magazines of 14 shots in .177, 12 in .22 and 10 in .25.

I’d seen a press release and images regarding the Daystate Red Wolf Serie Rosso, but seeing it in the flesh really brought home how striking this limitede dition model actually is! The red and grey laminate stock has an adjustable cheekpiece and buttpad, a carbon fibre shrouded barrel and a carbon fibre 480cc buddy bottle and comes fitted in a hard case. The Serie Rosso comes in .177, where is provides 450 shots @ 12ft/lbs and 185 @ 20ft/lbs. In .22 calibre, it produces 500 shot @ 12ft/ lbs and 80 shots @ 35ft/lbs.

The Air Arms Ultimate Sporter is now available with a regulated action, which improves consistency shot to shot and increases the total shot count by 40%. This air rifle is already great and the reg just elevates it even higher and the black soft-touch stock feels superb.

Brocock continue to go from strength to strength and their PCPs seem to evolve all the time. The Bantam Sniper HM uses the Slingshot hammer system, has a Huma regulator fitted, a carbon fibre buddy bottle, shrouded barrel and an ambidextrous thumbhole stock. It looks very purposeful and will no doubt be a hit with hunters.

Sterling Armaments has James Edmiston at the helm and as the former MD of the Sterling Armament Company, makers of the world-famous Sterling submachine gun and the ‘Edmiston’ from Boxall and Edmiston shotguns, he knows his way around the gun trade! Tony Belas is working as a consultant and airgun designer Graham Trim is also onboard, so the company have a sound knowledge base. I thought that the company would have one new product, but they actually had four! The first, the T-16, is a sidelever cocking, twin piston, recoilless gas ram rifle and costs £1400. The second is an updated version of the old Webley Service rifle, known as the Mk 2 that will be around £900. The H-18, a gorgeous, lightweight electronically controlled sporting PCP which will be £860. There’s even an FAC power take-down rifle (TR) that uses a large brass ‘air capsule’ as the power source that is charged via a pump and fitted into the action after a pellet (.25 to .45 calibre) has been loaded into the barrel. The sliding butt is from an AR15, as is the pistol grip. The export model can even fire steel-tipped carbon fibre bolts! As a company, Sterling have really hit the ground running and I can’t wait to test some of their amazing new rifles.

Highland’s range of Webley air rifles continues to grow and the Avenger 12 carbine with a synthetic stock and the sidelever on the left of the action will be £529. The En4cer sidelever cocking, buddy bottle fed PCP has an adjustable polymer stock and feeds from rotary magazines, 12 shots in 22 and 14 in .177. Price is £529. The Eclipse PCP pistol has a removeable butt and costs £449.99 and the VMX Cub Junior, with an ambidextrous junior-sized wooden stock and an action that produces a useful 7.5 joules is £129.99

Umarex have a fully licensed replica of the famous Glock pistol and it’s absolutely spot on! It is CO2 powered, with a 12-gram capsule in the grip and the magazine holds 16 BBs. The brand-new Walther RP5 is a lovely little item that can be bought as a sub 6 Ft/Lb pistol with a removable shoulder stock available as an accessory, along with a silencer, or as a sub 12 Ft/ Lb carbine with a permanently attached butt. Two CO2 capsules provide the power and feed is via a 5-shot, spring-assisted stick magazine and the action is cycled via a pump-action forend.

So, as you can see, another great show, with plenty to see and do!