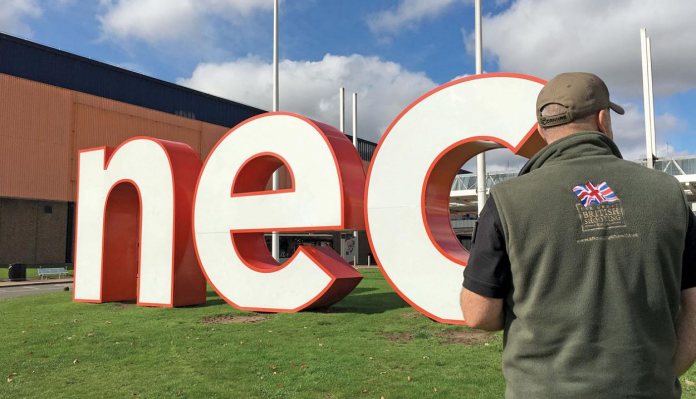 When the British Shooting Show opens this year at the NEC (February 16th - 18th) it begins a new chapter in the show’s incredible journey from a tented exhibition area in Nottinghamshire to the country’s National Exhibition Centre.

After the 2017 show, it was clear that if the British Shooting Show was going to continue its controlled growth, something was going to have to change and that something was the venue. Stoneleigh Park has been the home of the British Shooting Show since 2013 and has served it extremely well, but the event now needed a much larger venue to host future shows and so the search began.

A new home for the British Shooting Show was going to have to meet certain requirements. It was going to have to offer sizeable, first-rate exhibition facilities and also be easily accessible, not only for UK visitors and exhibitors, but also for those travelling from Europe and further afield. The next job was to compile a short list of potential venues; and that list was very short indeed. In fact, there was only one name on it; The National Exhibition Centre, Birmingham.

Stick your NEC out

Centrally located, 75% of the UK is within a three-hour drive and once you arrive, the parking at the NEC is FREE for visitors to the British Shooting Show. If the thought of the UK roads is something that doesn’t fill you with joy, there are 43 direct rail routes from around the country, straight into the NEC and with 25% off advanced fares from Virgin Rail, why not leave the car at home, jump on the train, relax in comfort and let Virgin Rail bring you directly into the NEC, with the entrance to the British Shooting Show just a two-minute walk from the platform. For visitors and exhibitors alike who are travelling from abroad, there are 143 direct flights into Birmingham International airport from European destinations, as well as direct flights from the USA and with the NEC only 90-seconds from the terminal, ease of access to the British Shooting Show from international destinations has never been easier.

Rifle manufacturers launch new sporting and tactical at the BSS

The largest gathering of rifle manufactures you will ever see in the UK attend the Great British Shooting Show making this a rifle shooter’s paradise. From new, ‘out of the box’, factory rifles, to the finest specialist custom builds, the choice is almost endless and there are prices to suit every budget. There are rifles for every discipline, from pest control, deer stalking here in the UK, through to big game rifles for the international hunter and also for the dedicated target shooting disciplines from 25-1000-metres and beyond. So, whether it’s .22 rimfire, F Class, .50 cal, tactical or Gallery, check out all the hardware, discuss all the options available and get the latest technical and competition information.

If you’re a shooter who loads your own ammunition, or you’ve made the decision to step across into the world of hand-loading, then the British Shooting Show is the only event of the year where you can talk to the manufactures and discuss new loading methods alongside top-end retailers, enabling you to purchase the largest range of reloading equipment and components.

The British Shooting Show will be a one-stop-shop when it comes to the most comprehensive range of popular hunting and long-range calibres, shotgun cartridges from .410 all the way through to the mighty 8-bore, as well as the more obscure and exotic loads for the big game hunter.

Optics manufactures take the British Shooting Show very seriously; nowhere else will you see product launches on this scale

After the purchase of your rifle during the show, the next most important part is the scope and mounts! With the shear amount of international companies exhibiting the finest optics on offer, you will need two days just to cover this section of the show.

The rifle scope is the link between you and your target. It can be the difference between a clean kill after a long stalk and a miss. It can be the difference between the10 and the nine ring. Choosing the right scope for your set up is very important and with over 60 optics brands represented at the show, there will be something there for every shooter. For the serious pest and vermin controller, there has never been a wider array of thermal and night vision available at the British Shooting Show, with no less than three dedicated dark tunnels in which to test and see just how far this incredible technology has advanced.

Shotgun manufactures launch new ranges at the British Shooting Show, ahead of IWA

If you’re visiting the show with the intention of purchasing a new shotgun, or looking for your very first shotgun, you will find a host of stands displaying the widest range of major international shotgun brands, as well as fine English crafted sporting guns. Whether you are looking for a trap gun or a game gun, there are many things to take into consideration when buying a shotgun – barrel length, correct fit, bore and choke, cast, chamber length, to name but a few. If this all sound slightly daunting and bewildering, fear not; all the assistance you could possibly need will be on hand, from all the International Shotgun manufacturers, through to the Finest English Gunmakers, all there to help you find the perfect shotgun.

This has always played a very important part of the show, for young and experienced shooters a like. The Global launch of new airguns at the British Shooting Show is the perfect place for the public and world’s press to get ‘hands on’ with the latest, modern spring, gas ram, pneumatic, (PCP), and CO2 powered airguns. With 34 manufacturer ‘have-a-go’ airgun lanes, as well as the Air Arms Experience, where visitors can have a try at speed shooting, UK Hunter Field Target, (UKHFT), where competitors shoot at metal targets in the shape of the usual airgun quarry, and UK Benchrest, if extreme accuracy is your game. There is a small entry fee for the AA Experience, but please note that this is all about the ‘experience’ and you will be able to speak to instructors from British Shooting – home of our Olympic Athletes. If you don’t wish to wait, as long as you keep your entry card with you, you can re-enter at any time over the weekend. On top of all that, children 15-years and under attending the British Shooting Show are FREE when accompanied by an adult. Whether you’re looking for an airgun to take part in target shooting, hunting or plinking you will find an Aladdin’s Cave of rifles and pistol at the British Shooting Show 2018.

Is a hunting safari something that’s on your wish list? These trips are becoming more and more popular with intrepid hunters who want to experience tracking and hunting game in exotic locations, such as the African plains. The British Shooting Show has more professional international hunting outfitters attending than in any previous year. With the number of different packages that can be tailored to your specific requirements, you might be surprised at just how affordable the hunting trip of a lifetime could be.

The National Gamekeepers Organisation has worked tirelessly with the British Shooting Show in bringing the popular Gamekeeping element to the show and is now a major attraction for gamekeepers and all who have a passion for country sports and pursuits.

Throughout the show area, visitors will come across stands where artisans demonstrate incredible craftsmanship, such as hand engraving, barrel making, stock making, taxidermy and stick making, to name just a few. The arena is the place to be for visitors wanting to enjoy an exciting line up of displays on a rural theme, presented by the leading professionals of their fields. The inspirational Andy Cullen MBE demonstrates invaluable techniques and personal tips on how to train your gundog and build a successful working partnership. The charismatic Chris Green will be sharing his vast knowledge of country skills, in a way that is as entertaining as it is enlightening. And if game cooking is your passion ‘Wild Chef’ Ralph Skripek will be showing how to prepare and create delicious recipes using the game abundant in our countryside.

Stunning and unusual gun, rifle and pistol collections will also be on show, from antique pistols and historic breech loading rifles to huge .50-calibre rifles and Mike Kay’s magnificent Winchester collection. For those wanting a challenge, ‘The Battleship Breach’ in the tactical area gives visitors the chance to come on board and ‘clear the decks’, shooting at a variety of targets against the clock, while moving through the ship.

A Festival of Shooting

What is the appeal of the British Shooting Show? The answer is quite simple: the show focuses on the needs of the gun trade and the needs and wants of the individual shooter. Those who have visited the big trade shows around the world, such as the Shot Show in Las Vegas and IWA in Nuremberg, will recall that jaw dropping moment when the sheer expanse of trade stands and products are first seen. These international shows are not just trade events, but a visitor experience. They bring the ‘Wow Factor’ and that is something that we need to have in this country. The move to the NEC gives the British Shooting Show the venue and the shooting industry the stage on which to deliver and present a truly international shooting show here in the UK.

Come and join us for three full days of shooting indulgence at the NEC, 16th - 18th February 2018, where you can enjoy a warm welcome, a friendly atmosphere and the best the shooting industry has to offer.