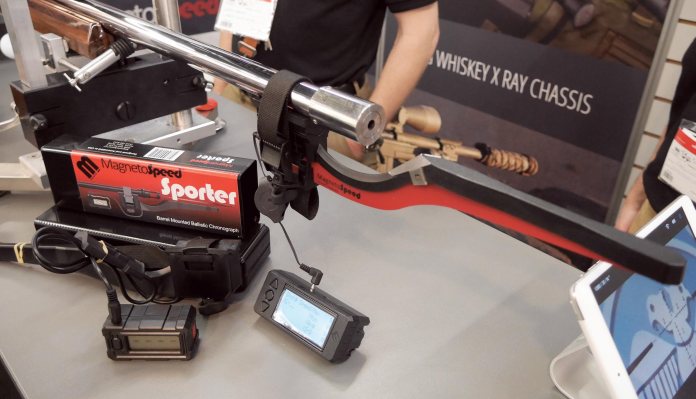 I have to confess to being a big fan of AimSport’s AimSonic moderators, so I was very interested to see that they now have a new line. The Triton series shows an over-barrel design and comes in two diameters (42mm and 50mm) and with a choice of standard or ‘sneezer’ (extended) mid sections for an overall length of 214mm or 264mm. Weights range from 345g (Triton 42 Standard) to 495g (Triton 50 Sneezer), and quoted noise reduction from 24-31dB respectively. As with AimSport’s existing models, the Tritons are beautifully made, show a tactile rubber coating, are modular in construction, come in a variety of bore diameters for calibres from .224 to .375 inches and have a five year warranty. What makes the Tritons different, however, is that they have been specifically designed to withstand the high temperatures generated by rapid fire. So, if you’re planning on doing some frantic boar shooting this year, and don’t want your banging to scare the piggies sideways, then the Triton was made with you in mind!

Battenfeld have had a busy year, launching almost 40 products, and Product Development Manager James Tayon tells me they are set to do so again next year. The cream of this year’s crop includes the Caldwell DeadShot ChairPod, a folding chair with a fully-adjustable DeadShot FieldPod rest built into it that sits – if you’ll pardon the pun – nicely between the cheap Chinese shooting chairs available on eBay and the taller, weightier and more expensive Idleback models. Then there’s a new Frankford Armory rotary tumbler that shows a polymer drum with transparent end caps and capacity for 1000 5.56 cases, direct beltless drive, an integrated media sieve, higher RPM for faster cleaning, and a lower price than its competitors. Also handy – literally – from FA is a de-priming tool that lets you quickly remove the spent primers from your cases before cleaning and without having to run dirty cases through your resizing die. With collets for all calibres, one squeeze of the trigger of this pistol-shaped device pops the primer out into a clear plastic container along with any crumbs of residue that might otherwise contaminate your workspace.

Another nice product for those who reload is the Caldwell Pic- Rail Brass Catcher, a wire-framed mesh bag, shaped like a soccer goal, which slides onto a Picatinny mount where it is held in place by two ball detents. It’s quick and easy to remove when you want to show clear or deal with a stoppage, and a zip in the back of the net lets you dump your brass when the net is full, or, if you prefer, you can replace the brass catcher with Caldwell’s new smartphone mount. There’s a neat new Mag Charger device for loading .223/5.56 and 7.62x39 magazines too, with matching ammo boxes… and much more besides.

A new BT brand is Hooyman, and James showed me a folding brush saw that clips onto a telescopic handle to give you a five or 10 foot reach, depending on the model. So far I’ve been using a set of garden ‘loppers’ to clear growth around my high-seats and a regular folding saw for pigeon hides, but the Hooyman looks like it could do both jobs, yet is much smaller than the former and scarcely bigger than a standard saw.

As well as some neat field cases for scopes and spare barrels, Swedish hunting accessories firm Caliber Hunting do a supersimple movement alarm for high-seat shooters. Using a PIR sensor with a securing strap, a wireless link with a 100 metre range, and a receiver unit with LEDs for a visual alert and both a speaker and an earpiece socket for audio, the hunting alarm can be purchased with either one or two sensor units. In the latter case different frequencies can be selected so that one sensor lights a green LED and the other a red LED on the receiver unit when activated. Personally, I’d like to see Caliber Hunting do away with the audio alert altogether and fit a QD clip to the sensor strap for faster mounting, but it’s still a great and, at under £60, a comparatively inexpensive way to get advance warning of animals approaching your ambush. Other versions are available for security applications, and could be just the thing for monitoring farmyard fuel tanks and machinery.

Keeping company with Rob and Simon on the Spartan Precision Equipment stand was Fine Ballistic Tools, an Austrian company that make chassis systems, bipods, muzzle brakes, and other rifle accessories. Their latest venture, and the one that brought them to Spartan, is an ultra-light ambidextrous thumbhole stock in carbon-fibre for the Blaser R8. This is much lighter than Blaser’s version, but not (yet), I think, such an ergonomic shape. FBT do an impressive carbon-wrapped barrel too.

Lyman have plenty of new products for 2015, but two in particular stand out: the Ammo Tracker Chronograph and the Borecam Digital Borescope. The Ammo Tracker is a conventional optical chronograph with a couple of neat features. Firstly, an easy-to-read LCD display simultaneously shows multiple data categories (average/max MV, ES, SD, shot count and string number), updating it automatically as you shoot, whilst a keypad gives access to additional functions. The display unit is also connected to the screens by a single cable, simplifying set-up. With a two foot screen separation, Lyman promise accuracy of +/- 0.5%. All in all, the Ammo Tracker has plenty to offer, and is an obvious competitor to Caldwell’s new Ballistic Precision model. The US price is around $160. (UK price TBC.)

In a class of its own, however, is Lyman’s Borecam Digital Borescope that permits detailed examination of the bore for fouling, wear, throat erosion, tool marks, and other rifling or chamber damage. Until now, however, they have had to be built as precision optical instruments, and have been appropriately expensive, but the Borecam changes all that. It uses miniature camera technology that displays detailed live images of the bore surface on the colour monitor supplied, and to store still images via an SD card. Alternatively, you can buy the borescope on its own and view its output on your tablet or laptop via a USB connection. The Borecam’s rod is just 22 inches long, so you may need to examine barrels from both ends, and it won’t fit .17 calibre barrels, but it will work with those in .20 calibre and up. The US price is around $270. (UK price TBC.)

March Scopes are also the European distributors of Magnetospeed’s unique chronoscopes, which work by sensing the magnetic disturbance caused by the projectile as it passes over them, meaning they can be used in any lighting conditions. It also means they are unaffected by muzzle blast, so can be attached directly to the barrel, giving a true MV reading, avoiding the need to move downrange to set up or adjust the chronograph, and even enabling you to shoot for accuracy with the Magnetospeed attached. At £375 for the top-end V3Magnetospeeds are expensive. All the same, you won’t regret buying one. If you don’t need all the V3’s features, however, there’s now a new Sporter model costing just £200. It’ll only fit to un-moderated barrels but like the V3 offers smartphone connectivity and an associated app.

SIG have clearly understood that owners of their new airguns are going to want to do a lot of shooting, so they’ve also introduced a range of targets that look like being a lot of fun. These include a knock-over target with a reset disk, a 4+1 knock-down-andreset target; a Texas star with nine arms – each mounting a folding target – and magnetic galleries with two or four targets. In keeping with the military styling of the guns, the target faces are all of the geometric centre-of-mass type.

Spoiler alert: reloading does not save you money. Few things are more irresistible than a new reloading tool and Italian reloading maestros Shooting Technology have two great new tools to tempt reloaders with. The L.E.M. is an electromagnetic case cleaner. Just dump your brass in the plastic bowl with some household detergent and stainless-steel micro-needles, place the bowl on top of the L.E.M.’s square black body, and turn on the power. An electro-magnet will agitate the pins, cleaning the cases in around 20 minutes and once they’re clean a magnetic separator will have them ready for drying in no time at all. The Vulcan is even more radical, as it anneals cases using induction-hob technology. Until now, annealing cases (to restore the ductile properties of the brass) has been a rather hit-and-miss affair, involving gas blow torches, water baths or rotary systems. What the Vulcan offers is a flame-free, and most importantly consistent, process that reconditions every piece of your brass – even .50 cal brass – in exactly the same way. The L.E.M. is available now and the Vulcan should be on sale soon after you read this.

One of the undoubted stars of the show was Spartan Precision Engineering. Their compact, lightweight and quick-detachable aluminium and carbon-fibre bipod, launched at the 2014 British Shooting Show, has been a runaway success, and has been further developed as a catalogue item for Blaser.

Spartan has also taken the product further in other ways – they’ve created a set of adjustable stalking sticks on the same principle. These can be shortened for kneeling shots, or extended for standing ones; you can add a third leg to create a tripod; the apex has Spartan’s patented magnetic connector at the top of a ball-joint where the legs meet, so you can pivot your rifle in all directions, and the tripod and connector are sturdy and rigid enough that, hands-free, the rifle will support itself. What’s more, there’s a hook under the apex so you can hang up your bag, simultaneously keeping it off the ground and ballasting the tripod. Alternatively, you can use it to perform a suspended gralloch on small deer species.

One of the tripods on the stand was shrouded with a waterproof cover: a proof-ofconcept for a lightweight hide that will enable shooters and birders to derive concealment and shelter, as well as support, from the tripod.

Spartan has also been working with Niggeloh to produce a Javelin rifle sling and had just received the prototype at the show. This was made from brown webbing with a matching neoprene pad for comfort and two bipod pouches on either side of a reversible tab with a steel insert that acts as a keeper for the Javelin’s magnetic connector. The dual-pocket design allows the rifle to be carried muzzle-up or muzzle-down, as preferred. The next iteration of the sling will have a leather backer to prevent the stretch in the sling pulling the bipod away from the steel or out of the pouch.

One of the most important elements of the Spartan plan for world domination, however, is a little alloy stock insert that provides a flush-fitting interface for the Javelin bipod when inletted into a rifle stock, avoiding the need for protruding adapters. Their goal is to make it as much a standard as the ubiquitous swivel stud.

Finally, I was shown a prototype cantilever bipod, the fruit of consultation with certain special-forces units to develop lightweight bipods for combat arms. As well as this light-butrigid platform for tactical rifles, they’re working on a version that doubles as a vertical fore grip.

Already known for their unique Superchrono acoustic chronograph, at IWA 2015 Steinert sensing unveiled what, for me, was one of the standout products of the show. The Neopod is an ultra-lightweight bipod made from carbon-fibrereinforced Peek – arguably the most high-tech polymer yet developed. It looks like it has been made from preciselymilled, finely-finished, and smoothly Cerakoted alloy, yet these properties are all inherent in the moulded polymer and its weight is a fraction of what you anticipate. Super-light, compact, rattle-free, and with easy, versatile and secure adjustments, a comprehensive range of adapters, and nonslip feet, it looks like the Spartan Javelin has a Nordic challenger to reckon with.