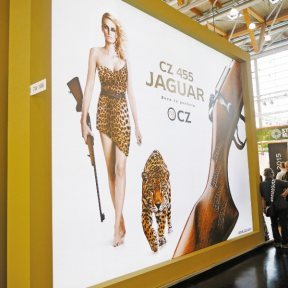 Anschutz have taken a second look at their 1780 full-bore rifle – now called the 1781 and made some improvements, adding a new recoil stop to the aluminium bedding block and a steel bushing in the alloy receiver for greater durability; a new firing pin block safety, a smoother cocking action; and an improved match trigger with selective single and two-stage operation that’s fully adjustable too. The 1781 hasn’t gained much of a following in the UK, it’s true – not least because it is only available in 30-06, nevertheless, mechanical finesse has long been an Anschutz selling point, and so more of it can’t be a bad thing.

Obtaining quality barrels can be a frustrating business, but now that Gary Costello (March Scopes UK) has taken on distribution of Benchmark Barrels in the USA, it promises to be a whole lot easier. They use only top-quality 416R and 4140R carbon steel, double hand-lap each bore for a true consistency and double stress relieve the metal. Chambering is done via industry- leading CNC and featuring techniques that give supremely straight and uniform results. Blanks are available in all standard contours, a choice of 2, 3, 4, 5, 6 and 8 land/groove configurations and a variety of twists in most calibres. There are even carbon-fibre wrapped models!

Blaser continues to expand the range of options for their R8 straight-pull. New is a Long Range in .338 Lapua Magnum, accommodating this calibre requires dedicated magazine/trigger housing. To this they have added a 27” barrel in a choice of profiles, with an optional Dual Brake muzzle brake, and fluting. It can be specified in the fully-adjustable GRS laminate stock, or the Professional Success thumbhole version.

Fans of the Professional Success stock can also enjoy a wider range of options, as it’s now available in a choice of black, maroon, terracotta, teak or sand coloured except for their 9mm models as manually- leather grip and comb inserts, also carbon fibre. Even smarter is a deluxe version that comprises an alloy chassis housed in a shell of high-grade Caucasian walnut complete with an ebony forend tip and grip cap!

Chiappa’s standout item is the Model 1886 Ridge Runner, a take-down lever gun in .45/70. It has a big loop lever, semi- octagonal 18.5” barrel with a removable muzzle brake and thread protector, a 4-shot magazine, a hardwood stock with a rubberised finish and a choice of matte black or chrome metalwork. There’s a scout-style Picatinny optics rail fitted with a Skinner rear aperture sight that is complemented by a fibre-optic bead at the muzzle. Here, piggy, piggy!

First seen at the BSS, German AR specialists Hera Arms now offer their entire range, operated, which is good news for us! A charging bar replaces the standard T-handle and runs forward along the side of the receiver to a point just above the bolt release. A knurled roller handle projects out at 90° from the receiver and 15° up or down, depending on whether you mount it to the left or right side. Current barrel, handguard and finish options (black, grey, tan or bronze) left me feeling that anyone after an AR in the UK should check out what Hera have to offer. They have a UK dealer - Parabellum Consulting Ltd.

The Howa mini action’s bolt weighs 10.2oz , making it 2.9oz lighter than the short action and 5oz lighter than the long and it is just 6” long, giving a bolt throw that is 0.9” shorter than the short action’s and 1.4” shorter than the long action’s. Howa Mini Action rifles are fitted with Hogue over-moulded stocks in a choice of black green or a Kryptek Highlander camo finish and weigh just 5.7 lb. They will be available initially only in .204 and .223, but more calibres are promised, hopefully including a .17 Hornady Hornet.

Innogun’s new product was a modular chassis system called the Tactical Base. Two things set it apart. There’s a version for the Blaser R93 that enables the use of 10-round AI magazines. It comes as standard as a lower chassis, but you can add an upper component that bolts on to provide a full-length optics rail and a wrap-around hand-guard. It takes AR grips and butts and is available for Remington 700s, Tikka T3s, and Mauser M98s. If you want something that bridges the gap between the MDT TACT21 and LSS systems, the Innogun chassis is it; and if you want to tacticalise your Blaser R93, it’s available!

Hot on the heels of Lithgow’s impressive rimfire comes a centrefire addition to their Crossover range. There’s a distinctly Tikka-ish feel, which features an ergonomically-pleasing stock in a choice of polymer, walnut or brown laminate, an action with a tang safety and an integral Picatinny rail and a hammer-forged barrel with a threaded and capped muzzle. The specification is nicely rounded off with a hard-wearing grey Cerakote finish.

Mauser has added new models to their M12 range, including High-Grade and Solid versions. Also available is an M03 in a GRS stock, with a fluted barrel chambered for the .300 Win Mag. Their principal launch this year was the M98 Magnum. This is an off-the-shelf rifle – or very nearly so, with order times a fraction of what would be expected from a true custom. Features include those most commonly requested by their customers. The M98 Magnum has a practical double square bridge receiver for scope mounting, plus iron sights with a fixed rear blade calibrated for 50m and flip-up leaves for 100m and 150m.

Merkel have been giving some thought to the needs of female shooters and anyone of smaller build. By studying how women mount and hold their guns, and using biometric data, they have produced new stocks with appropriately modified dimensions, including steeper pistol grips and raised combs. Thus there are now Lady DS version of the RX Helix, K3 Kipplauf, and B3/B4 O/U bergstutzen and combination guns.

Mossberg’s Patriot offers an extraordinary 63 variants, and 11 popular calibres. There are even factory-scoped packages with Vortex optics. The push-feed action is Reminiscent of the Remington 700, but has a spiral-fluted, twin-lug bolt with a knurled knob, and uses a detachable, flush-fitting polymer box magazine. The trigger is Savage style and adjustable from 2 – 7lb, barrels are 22”, free-floated, and button-rifled, with a fluted/ sporter profile as standard. Stocks contain a polymer bedding block, show classic styling with a straight comb and come in a choice of walnut, grey laminate, and black or camo synthetic, all with stippled panels and sling swivel studs.

Their MVP range gives shooters a bolt-action rifle in 5.56/223 Rem or 7.62/.308 Win that feeds from AR15 or LR308/SR25 magazines. This year there’s a tactical-precision package called the MVP LC (Light Chassis). It uses MDT’s excellent LSS model (in Desert Tan), with a Magpul CTR adjustable stock, MOE Pistol Grip, and 10-round P-Mag. The package is topped off with a Picatinny rail mounting a 4-16x44 Vortex Viper HS-T MRAD scope in Viper rings, and Harris bipod. Barrels are heavy-profile, semi-fluted, threaded, and supplied with a Removable SilencerCo Saker Trifecta muzzle brake/QD Mount, and thread cap.

It was good to see Riflecraft with a sizeable stand at the show showcasing Vortex Optics; Barrett Rifles, Bore Tech cleaning products and something I really hadn’t expected to see: the Riverman Gun works MBR (AR15) takedown rifle. Why are they interesting? It’s not so much the ergonomic familiarity and flexibility of their AR-style build, or their ambidextrous cocking, but rather the fact that switching between calibres is as easy as unscrewing the handguard, sliding out the tube, and then reversing the process. Riverman offers the MBR15 for small-medium calibres (.204, .223/5.56, 6.5 Grendel, 6.8 Special, .300 AAC) and the MBR10 for medium-large ones (6.5 Creedmoor, .260 Rem., 7mm 08, .308, .338 Federal, .358 Win.). Barrett’s 98B Fieldcraft has a lighter receiver than the standard model, an improved barrel attachment system for enhanced accuracy, and a hand-guard with hunters may have that this is the switch- KeyMod slots for maximum configurability with minimum weight. It is available in 300 Win Mag, .308 Win, 7mm Rem Mag, 6.5 Creedmoor, and .260 Rem and in black, Bronze, Multi-Brown, OD, FDE and Tungsten (grey).

Sako’s TRG M10, has everything you’d expect of a modern tactical precision rifle: alloy chassis, adjustable folding stock, a pistol grip that accepts different sized polymer inserts to match it to the size of the shooter’s hand, a tan-coloured Cerakote finish, and even an adjustable folding rear monopod with a ski foot. Most importantly it’s a switch-barrel system! Their Carbonlight is a variant of the model 85 bolt-action rifle. A stainless-steel action and fluted 20” barrel are complemented by a sleek stock made from carbon-fibre-reinforced polymer to produce a rifle that weighs just 4lb. Calibres - 22-250 Rem, 24/3083 Win and 7mm-08 Rem in a 4-round box mag.

Sauer’s 404 aims to resolve any doubts barrel rifle for them. Changes include: a tang-mounted cocker/de-cocker; a receiver milled for a QD mount, improved barrel- change system. Plus a trigger that is adjustable for reach, angle and offers four, selectable pull weights (1, 1.5, 2 and 2.5 lb) and an interchangeable bolt head. A wide choice of barrels, stocks and finishes makes the 404 the most practical and versatile rifle yet from this premium brand. They have also added three new variants to their affordable –and excellent- 101 model. Now available in various finish, size and calibre combinations including the Artemis a ladies’ version!

It was evolution rather than revolution for Steyr Mannlicher this year, so the most eye-catching items on their stand were a synthetic-stocked CLII and SM12 SX, presented as a package with a Schmidt & Bender Stratos 2.5-13x56 scope and QD mounts all finished in the smart new ‘Demorphing’ camo pattern from German clothing firm X-Jagd: all a far cry from the combination of walnut, blued steel, leather and loden usually associated with German hunting gear.

Few guns are more fun to shoot than semi-auto .22 rimfire military look-a-likes and for 2015 Walther have added the Heckler Koch G36. It features a distinctive top- mounted, ambidextrous charging handle that reciprocates with the bolt and a sturdy folding stock. The battle sights offer a windage- and elevation-adjustable rear unit with a choice of 2 apertures. The 18.1” barrel is all-steel, and magazines come in 10- 20- or 30-round formats.

Winchester have a new centrefire called the XPR, which also subscribes to the budget ethos now gaining popularity around the world. It looks little like a Model 70 and a lot more like Browning’s A-Bolt 3; hardly surprising seeing as who owns who. But doubtless it will shoot and work well and the price will be highly competitive. Not new as such but Browning have given their rimfire T-Bolt, straight-pull a rather nice makeover. Called the Varmint, Stainless laminate the name says it all with a heavier, varmint-style SS barrel/ action and a grey laminate stock. Chances are we will be seeing other options such as the 3-colour Green Mountain Camo too.