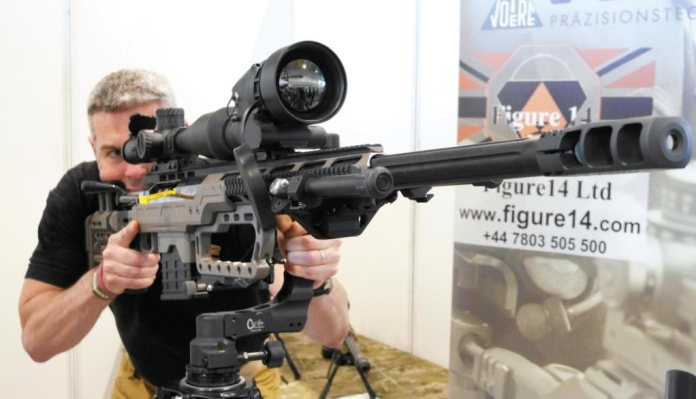 The show was a great success again, providing an exceptional opportunity to see, sample and take part in a huge range of shootingrelated products and activities. Here are some of the things that caught my eye. And it seems to me that the general increase in similar events up and down the UK can only be a boon for all shooters.

Aim Field Sports has a new rifle bag. Called the Scout, it is rectangular in shape, available in green or tan, and comes complete with a matching range mat. It takes rifles up to 49.5” and has an internal depth of 11.5”. It has a reinforced internal butt pocket and adjustable securing straps. On the outside, there’s a large, 1/2 length pocket mounting a further three bellows pockets, and a PALS webbing system at either end for MOLLE gear. Other lengths and a range of suitable additional pouches are in the pipeline. The range mat is of the roll-up type, with a waterproof underside, a textured section for non-slip rifle positioning and fold-out flaps to increase the space available to a maximum of 80.5” (205 cm) x 40.5” (103 cm). Price is £190.00. www.aimfieldsports.com

The last 12 months have seen both Blaser and Sauer launch O/U shotguns designed to appeal to female shooters on the basis of their dimensions. Blaser’s gun is the F16 Intuition and Sauer’s is the Artemis. Each takes a similar approach to complementing the female physique, offering specially-proportioned butts with a reduced length of pull, a more slender pistol grip, a shorter trigger reach, a semi-Monte-Carlo comb, and a combination of negative pitch and positive cast at the toe. The F16 is German-made and 100% Blaser; The Artemis is a co-production with Fausti Stefano in Italy. The F16 is the plainer of the two, simply showing its name in red (Sporting) or silver (Game) on the gunmetal-coloured receiver. Whereas the Artemis sports a black action with the Sauer logo picked out in gold on the hinge pin, laser-enhanced grain on the stock, and a Silver’s-style orange rubber recoil pad. Blaser. www.blaser.de [UK: Blaser Sporting]

Cannae Pro Gear takes their name from the battle in 216 BC when Hannibal inflicted a crushing defeat on a vast Roman army. This may seem an unusually combative ethos for a firm that produces only clothing and luggage, but everything in their inventory is designed for the toughest and most exacting use. Items in their clothing range, which includes T- and polo shirts, hoodies, microfleece zip-neck pullovers and soft-shell jackets- have cool names like; operator, tactical and battle ready. Their approach to colour is like Henry Ford’s: anything; as long as it’s black! To be fair, a couple of items are available in green, grey or tan. Luggage includes a big carry-all called the Transport Duffle, the Phalanx a full-size duty pack with a helmet-carry flap and a day pack called the Legion, which is also available in an Elite version, c/w helmet carrier –a feature that is sure to appeal to airsoft players as well as professional MIL/LE.

For shooters, there’s the Armoury range bag and the Triplex Acies gun bag. The latter isn’t a misprint, but the name of a Roman battle formation with a reputation for flexibility and adaptability. The bag can hold two long guns, separated by a sturdy divider and held in place by user-configurable straps. There’s also a 12” extension tube to accommodate extra-long guns, drag handles at each end, compartments for magazines and ear defenders on the front, and hideaway rucksack straps on the back. All materials are top-notch, selected and deployed to provide resistance to abrasion, shock, strain, heat and solvents just where it’s needed. cannaeprogear.com

I’ve admired DPT’s moderators for some time. Designed and made in NZ, they combine light weight and compact dimensions with flexibility and versatility thanks to their aluminium alloy build and modular format. Start with a base unit that matches the muzzle thread and calibre of your rifle, then add as many individual baffle sections in the corresponding calibre as your personal preference dictates. You can ‘even-out’ wear by re-ordering the sections after cleaning, or you can buy a stainlesssteel section that is designed to take the brunt of the muzzle blast. Both muzzlemounted and reflex types are available and all thread types are catered for. DPT UK Euro. www.dpteuro.co.uk

You know those neat bits of cool shooting gear that you see online? The ones you really want, but can’t get because they’re in the US and the guys that do them either don’t ship internationally or have shipping rates that make your eyes water? Well a new outfit called Element Rifleworks (ER) is doing its best to fix that. For example, they’re now bringing in desirable product lines from First Tactical (range bags, gun cases, day packs), Rifles Only (slings, shooting mats, rear bags, and moderator covers), and Storm Tactical (sniper’s data books and cards), and director Sam Ball tells me that they’re set up to import any US gear UK shooters want. So if there’s something you’ve been dying to get hold of, give them a call. They offer a nice line in custom configurations and finishes for tactical rifles and shotguns, but what really excited me was discovering that they are also the UK distributor for Aero Precision (AP), makers of some very tidy and well-priced AR-type rifles. The first rifles in are semi-automatic .22s, but these are soon to be followed by straight-pull centrefire AR15s and AR10s. The AP rifles come as standard with military-weight triggers, but ER will happily fit a more refined unit from the get-go on request. www.elementrifleworks.com

Last autumn, Fausti found a new UK distributor with Stag Country Sports. Owner Tony Laughton, himself a keen shot and an experienced gamekeeper and sporting agent, has been working closely with Fausti to ensure the guns he imports are as perfectly matched to the UK market as possible. The other side of Tony’s role is to raise awareness that in addition to being an accomplished maker of mass-produced guns, Fausti also offers a genuine bespoke service. This includes a VIP package in which clients are flown out to Italy, stay in Fausti’s own 5-star resort hotel, and tour the firm’s workshops, where they can meet the craftsmen responsible for creating their guns, have the measurements taken, and finalise their choice of specification, wood and engraving. With his sporting agent’s cap on, meanwhile, Tony also organises attractively-priced shooting trips to Namibia that sound perfect for the more independently-minded sports shooter. Fausti Stefano. www.faustiarms.com [UK : Stag Country Sports]

Idleback’s shooting chairs are in a class of their own for ruggedness and comfort. They’re versatile, too, so you can fit round or saddle-type seats (both generously proportioned and padded), a cushioned back support, an extendable arm complete with rifle cradle, and even an arm rest, as you wish. Ideal for all hunters who know the value of sitting still, they are a particular boon for shooters with limited mobility who would otherwise have to give up their sport. The original rifle cradle is a one-piece affair, but MD Trevor Horner has come up with a new adjustable version to add to the options list. Made of precisionmachined anodised aluminium, and mounted in place of the standard cradle, it can be raised, lowered, offset and pivoted as required, and its two jaws, which are lined with soft Velcro loop material- can be adjusted to accommodate any forend then locked to grip them securely. The new cradle will fit on any tripod, too, and at under £40 it offers the shooter a truly affordable alternative to the much-more expensive US-made products. Idleback. https://idleback.co.uk

After something of a hiatus in supply, Remington rifles are once again being actively distributed in the UK. I met James Nicholson, MD of the new UK arm of Australian shooting sports distributors Raytrade, who handle Remington down under. Better still, Raytrade also distribute other famous Freedom Group brands, including Marlin, H&R, Dakota Arms, and Barnes Bullets. Raytrade had a good selection of Remington and Marlin rifles on display. Most prominent were a Model 700 in a MOD*X GEN III MRS modular chassis by American Built Arms, and a Model 783 in an MDT LSS chassis. The former shows a 360° Key-Mod hand-guard, whilst the latter has a slender, open-topped forearm. Either chassis can accept any AR-style butt stock and pistol grip.

Together they represent interesting additions to the current bumper crop of tactical/precision rifles based on popular rifle actions, offering something new at both an entry level and a more elevated price points. For those who still like a classic look to their tactical rifles, there’s the Model 700 XCR (Xtreme Conditions Rifle). The free-floated barrel is 26” long, with a varmint profile, wide flutes for rapid cooling, and a recessed target crown. UK rifles also feature a threaded, capped muzzle. The Bell & Carlson composite stock has an OD green finish with a black-web for extra grip, and features a full-length aluminium bedding block, two sling studs up front, plus a beaver-tail forend and a thumb-hook for optimal control from bench or bipod. The trigger is Remington’s externally adjustable X-Mark Pro unit, and feed is from a hinged floorplate magazine, which seems a bit old-fashioned amid the current vogue for DBMs, but is perfectly adequate for informal range work. It’s available in three chamberings: .308 Win, .300 Win. Mag, and .338 Lapua Mag. Raytrade UK. https://raytradeuk.co.uk