Shotguns at the British shooting Show 2018 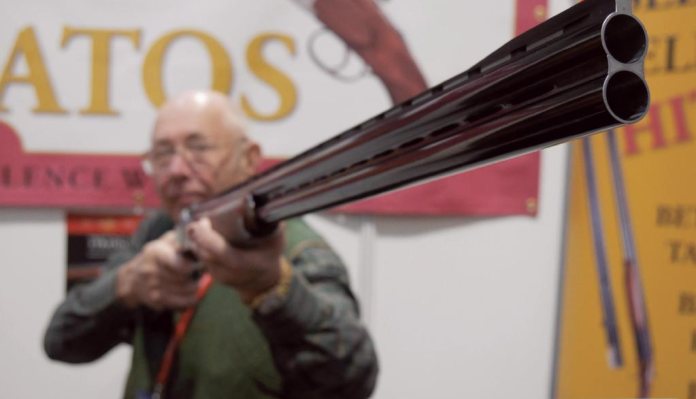 The Great British Shooting Show is always a treasure trove of treats for the shotgun enthusiast, but this year’s show was unquestionably the best yet.

Instead of starting with the new releases, I set about tracking down some of the classics of yesteryear at auctioneers Bonham’s, Holt’s and Southam’s, and at specialist dealers Francis Lovell and Giles Marriott. Then I went to see some of the finest examples of new English gunmaking at Atkin Grant & Lang (more of them later), Boss, Boxall & Edmiston, Holland & Holland, Longthorne, Watson Bros. and Westley Richards, before rounding off my tour by watching and talking to some of the finest proponents of the gunmaker’s craft on the English Gunmaking Heritage stand.

Many of the foreign makers have been taking a classic line recently, too. Thus, Blaser unveiled two deluxe versions of their notionally no-frills F16 over-and-under Both the Sporting Grand Luxe and Sporting Heritage show effusive acanthus scroll engraving (offered with or without game scenes), but the Heritage takes poll position, thanks to its side-plated action and Grade 8 walnut.

ASI, meanwhile, had a double treat in store from B. Rizzini. Rizzini’s guns always come with a generous slice of style, but the new RB Regal Standard and Deluxe, are surely the most elegant guns yet produced by this ever-more-impressive Italian marque. Both show side-plated actions embellished with some of the deepest, most satisfying laser-engraving I’ve ever seen, plus extended bottom tangs, solid joining and sighting ribs, London fore-ends with Anson buttons, and Prince-of-Wales grips, whist the Deluxe adds hand-engraved detailing and a steel grip cap.

More Italian models for modernday English milords were to be found at Anglo-Italian Arms, where Caesar Guerini’s Invictus now comes in two prestige versions, the III and the VII. Both feature high-grade walnut, and actions richly embellished with renaissance scroll and gold inlays, whilst the VII maximises the decorative space by adding sideplates that provide a veritable spotter’s guide to game birds!

Fausti Steffano Also on-trend were Fausti, who are now making some very nice semi-bespoke game guns tailored to UK tastes, including, and especially, the new Class RDX O/U. That this coincides with their partnership with British distributor Tony Laughton of Stag Country Sports is surely no accident.

Browning had a treat in store, too. A prototype of a new 525 model called the Royale. Offered as a 20g with a solid game rib and Grade 6 walnut, it features slender, nominal-gauge barrels to optimise performance with fibre wads, and attractive engraving incorporating depictions of waterfowl and pheasants inlaid in silver instead of the more usual gold. The gun looks and feels wonderful, and a production version should be available by the start of this year’s season.

John Jeffries, whose longbarrelled guns with their unique ribs optimise velocity, steadiness and accuracy to give high-bird shooters that essential edge, has added another string to his bow by complementing his Perazzi- and Perugini & Visini-based models with the Stratos, a new line of guns from Zoli. These guns offer the same barrel and rib options as before, but at a price to suit more pockets.

New Guns for the Girls

We saw some new guns designed for female shooters this year as well. In the wake of Blaser’s F16 Intuition, Guerini’s Syren, and Sauer’s Artemis come Browning’s Liberty Light - an aluminium-actioned B525 - and Zoli’s Z-Bella. All these guns offer stocks carefully shaped and sized to complement the female physique, but Browning’s is the only one to take the light-weight route, and Zoli’s is the only one to embellish its otherwise-understated black or silver action with discreet but eye-catching Swarovski crystals. The Z-Bella has a trick up its sleeve, too, in the form of the BHB, an adjustable balancer hidden in the pistol grip.

The Belgians, Germans and Italians still dominate the upper end of the scale when it comes to imported guns, but a couple of recent releases from Yildiz suggest that it may not be long before we start buying Turkish guns for style as well as price. The models in question are the Wildfowler Extreme and the Pro Sporter. The former could be described as a ‘plain gun’, were it not for the attractive tiger-striping of its colour-case-hardened action and its well-figured walnut woodwork. Despite the name, it is surely too nice to take to the foreshore, but it would make a great all-rounder. Better still, is the Pro Sporter, whose blackfinished Boss-type action and superb woodwork do such a good job of making you think ‘Perazzi’ or ‘Kemen’, that both its Turkish origin and its price tag surprise and delight, respectively!

For those looking for a goodlooking, practical gun of a different sort, Browning has a trio of new semi-auto variants. Thus, alongside a smart Black Gold edition of the Maxus -resplendent in a walnut stock and an engraved receiver complete with gold waterfowlwere two synthetic/camo guns: a Maxus in ATACS AU -a pattern now adopted across Browning’s extensive range of guns, clothing and accessories – and the A5 Grand Passage, featuring stock-work in a dipped Realtree MAX5 finish and a barrel and receiver in tan Cerakote. They look good, but would look better if Browning extended the finish to the trigger guards and used tan-coloured stock spacers, rather than standard black ones.

Now for my two stand-out guns of the show. They could scarcely be more different – a testament to the unique scope of the BSS. First, the Kral XPS. This is a Turkish-made Vepr clone. Of course, AK- and AR-style shotguns are a big thing right now, but this particular one had been modified for Oceania Defence UK to have a fixed, 2-shot magazine. On one hand the modification eliminates 90% of the point –big payloads and fast reloads are what boxmag shotguns are for! - but on the other it makes the Kral Section 2, so now anyone with an SGC can own a 12g AK.

My last gun is Atkin Grant & Lang’s Stephen Grant roundaction 12g O/U. This is a gun I’ll most likely never be able to afford, but that’s no reason not to admire it. Beautiful things are always a joy, and the Grant is simply gorgeous. And however close you look; it is simply flawless. AGL aren’t one of the biggest names in best English gunmaking, but on the evidence of this gun they are up there with the very best of them. What a great show!