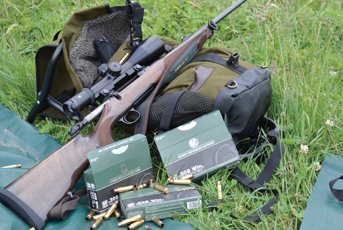 When Editor Pete Moore contacted me and said “Chris, fancy a trip to Denmark” I knew what he meant immediately. I read of this trip courtesy of Zeiss last year and when he told me of the likely round count and the fact his shoulder was giving him some grief, I took the only honourable decision, to be the sacrificial lamb to the slaughter for ‘Shooting Sports’, it’s a hard life!

OUR GEAR IS GOOD, WE WILL PROVE IT!

Starting out last year, Zeiss, in cooperation with Sauer and RWS thought it would be a good idea to invite shooting journalists from across Europe to a range in Ulfborg, Denmark to try out rifles, ammunition and of course the scopes of which they are so proud. The official press flyer instructed us to arrive at Billund airport in Denmark by 3pm on Friday the 28th June and other than bringing casual clothes and wash kit, we would be looked after. Reassurance was set in place that ammunition would be plentiful and a good sense of humour mandatory so I made my way to the airport built by, if not with, Lego and boy was I going to get a surprise.

I arrived early at the airport and as other shooting journo’s flew in we all got acquainted and chatted about what to expect. Many had come to the event last year and reported a good time ahead and when Dr. Armin Dobat from Zeiss arrived to sort lunch and `refreshments`, we all tucked in before boarding a minibus for a 60 minute transfer to Ulfborg, good humour was already bubbling…

I had read Pete’s report from last year and all looked to be a jolly fun time shooting guns we weren’t allowed in the UK and generally having a few product demonstrations and seminars to assure the chiefs back in Germany we weren’t JUST having fun. In Ulfborg we were all shown to 4-man bunkrooms in the large clubhouse and shown the various washroom, bar and dining areas. This was previously a military facility, but apart from the generally flat terrain and odd distant bang, we could have been at Butlins with the soft sandy ground beneath our feet. After a brief trip to the bar, we were all `refreshed` and grouped outside for the official welcome from the three companies with a description of the two days ahead. Invited to replenish our `refreshments` at will and just to note on the bar tab, various other companies including Harkila started to outfit us with clothing, rucksack chairs, ear defenders, quad shooting sticks before we sat down to dinner and product demonstrations.

The new Sauer 101 in .308 Win was to be our personal issued rifle for the weekend, equipped with the New Zeiss 3-12x56 HT scope and ASV+ turrets. A very well organised rota was split around the room organising the 25+ journalists from as far afield as Finland and Italy into 4/5 man teams for the following day. RWS assured us we must make do with 49,988 rounds of ammunition to which we all mumbled mock disappointment. Novelties such as a .50 BMG rifle were flashed around to try out for those not acquainted with them but the novelty for me was a 500 S&W revolver, complete with muzzle brake! The evening continued with relaxed conversation and stories of hunting before a night’s sleep drifted toward a 7 am breakfast alarm. All day Saturday involved moving from range to range using various types of gun including pistols on static and moving targets at ranges between 10 and 540 metres. The complex at Ulfborg is listed as having `35 lanes` but when I tell you each one is a range itself, usually having 8+ firing points it is easier to imagine something the size of Century Range at Bisley, but split into small packets around the woodland and coastal sand dunes, it was awesome!

The whole day revolved around the fun elements of shooting but more importantly, introduced us to all the targets we would be using to compete the following day in the Scandinavian-style Field Shooting experience. I have to honestly say I am more of a shooter than a hunter although I do both and the introduction to running stags was awesome, all done standing with both stationary and running shots.

I actually took to it quite well using a Sauer 303 semi auto rifle in 30-06 with a 1-6x Zeiss atop it. More of a catastrophe was the `Tusker`, a small boar that zips across a 10 metre gap about 30metres away and needs 3 shots, I was rubbish. Shooting from sticks was fine, I’ve done that before and the quad sticks supplied were very stable and adjustable to personal preferences. Seated and standing shots unsupported were a baptism of fire but I have a few past skills that may have translated well to it - more of that later.

All prone shooting was done using just elbows TR style with the standard sling or rested on the rucksack given to us the night before that we had been encouraged to stuff with spare clothes for ideal rested shooting height. BBQ lunchtime came around with a menu suited to a true carnivore’s appetite and before I knew it, I had shot over 300-rounds in a day at various ranges through all sorts of weapons. It now dawned on me how my `issued` 101 had just slotted into place and felt easily at home.

I am probably more of an optically clickety-click type shooter than some of the other guys there but the general opinion was the rifle and scope were a great package. My background made me look at it from more technical standpoints and considering the shots at long range were no easy task, I have to say the rifle was bloody good, both ergonomically and mechanically with an exceptional trigger! The Evening BBQ and drinks led to much conversation about tomorrow’s competition, past winner’s chances’ and a few surprises in the format. Bed arrived at midnight, still light in the sky at these northern latitudes.

I had very few thoughts about the competition, although generally informal I had the feeling many treated it seriously with journalistic pride surfacing to gain the badges of honour available. Each four man group were sent out with an instructor for the day and walking around what can be likened to a ‘golf shooting course’ for 6 hours with gun, sticks, ammo and water.

Each `lane`, many of which we hadn’t encountered on Saturday had a specific target discipline and shooting position laid on which we were to follow exactly. Our instructors would both score and judge all performances on everything from roe deer targets to Moose and Boar along with steel plates at long range and a charging Buffalo. I was thrown back in time as the four of us set out, quietly approaching each layout with a touch of hesitation. I actually found it quite emotional as it reminded me to tackle each target in turn, pay attention to the format, rules and scoring. I just clicked back into my competitive archery psyche.

I could detect a hint of nerves in myself as I clinically addressed each target and was immediately pleased with maximum scores, some not dissimilar to DSC type qualification shoots. It then got interesting as we found Axel from Sauer all dressed up as a theatrical PH giving us instruction on shooting a Sauer 202 .458 Lott at a charging buffalo target. It was the 4/5/08 I became a Dad and superstitious as I am, was grinning with the chance to shoot what many consider a bit of a handful, but to me was a lucky number. My hand went straight up, “I will shoot first”, but although I shot it well and put two BIG holes right next to each other they were too low to score as `lethal` and I had dropped 10 points, I was gutted, I thought my day was done for.

A few rumours filtered around the shoot that known `players` had made costly mistakes but I made damn sure I wasn’t going to. The long range shots I considered my speciality and they came right at the end for my group’s day. Unsupported standing 540 m shots at figure 11’s were an unknown quantity but I know from prone, they were going down and they ALL did!  Well the day was done, everyone was smiling and we each had to hand `our` rifle back in to the Sauer guys at the armoury. A quick meal, pack the bags and the minibus awaited for out airport transfer. The representatives from Zeiss, Sauer, RWS and others all thanked us for attending, awarded the podium winners and a fantastic weekend drew to a close with memories of new friends, new hunting stories and appreciation that there are some companies really pushing the envelope on technology and happy to PROOVE their gear works.

Thanks to; Zeiss, Sauer & RWS ammunition, Harkila and a big thank you to Pete, I think I held the British end up!

Editor’s Note:
Chris was too shy to say he finished in 3rd place overall and came home with a trophy. I have to say I was most impressed and very proud of him, as given the standard of the competition last year he did more than hold up the British end. Well done mate; the boy done good!