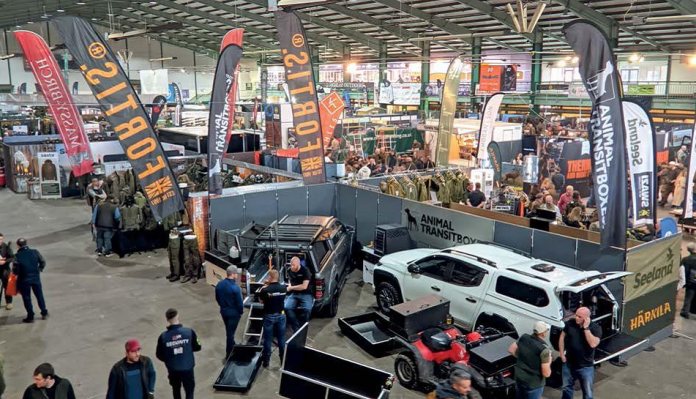 For stalkers new and old, the new Stalking Show was the perfect place to see and buy the latest rifles, optics, ammo, clothing, footwear and accessories under one roof; but also, as a hub for showcasing hunting aids such as high seats and doe-boxes, as well après-shot gear for carcase retrieval and transportation, chilling and lardering, processing and preparation. The major shooting and deer-tracking organisations had stands too, as did the Stafford and West Mercia Police firearms licencing teams. All this was further enlivened by talks and demonstrations, and the presence of many faces from YouTube’s best hunting channels.

A key concern of for stalkers today is finding non-lead ammunition that hits the spot for accuracy and terminal performance. Virtus Precision is a Rugby-based firm that produces CNC-machined projectiles for handloading. Their design shows a hollow nose; long, pointed profile, scored for 3-petal opening; a short parallel section for obturation and grip; and a dragreducing boat-tail to boost the BC. You can choose between Eagle, Merlin and Osprey versions to suit your cartridge’s impact velocity and your preference for fragmentation or weight-retention. Popular calibres from 6mm and up are available, quality looks impeccable, and sample targets were impressive. (www.virtusprecision.co.uk)

Sales of non-lead ammo were also brisk at Edinburgh Rifles’ stand. ER import two brands: Fox from Slovenia and Peregrine from South Africa. Both projectiles and cartridges are available. The Peregrines are loaded in the UK using data painstakingly developed by ER’s Ed Bewsher. Fox’s hunting bullets have hollow, polymer-capped tips; conical, mushrooming noses; and long, grooved bodies; and come in calibres/ weights/cartridges from .224/45/.222 to .375/250/9.3x62. Peregrine bullets come in pointed and round-nose styles in calibres/weights from .172/21 to .509/750. Peregrine ammunition was brand new at the show, with much of the first batch still at the proof house, but the 100-grain .243 rounds I saw looked the business. (http://new.ersg.com)

Life-size animal silhouettes cut from bullet-proof Hardox 500 steel make ideal targets for pre-stalk checks, training and practice. BH Targets were first in the field, followed by Tom’s. Targets, but newcomers The Steel Target Company, have undoubtedly raised the bar. Their latest addition is all about rounds-onpaper, however. Called the Zero Hero, it’s a handy (it has an actual hand-hold), Hi-Viz (orange powder coated), heavyduty (but try not to shoot it!) support for a conventional card, Correx or plywood backer up to 35mm thick. (www.thesteeltargetcompany.co.uk)

Another target-maker now catering to field shooters is Practical Targets Co. With a wealth of experience and expertise in crafting Target Shotgun and IPSC targetry, they’re currently developing a new range of roe, muntjac, fox and crow targets and brought their prototypes along to the show to find out first-hand what their potential customers want. I really liked the small reactive kill zones and clear hit-flags, and it sounded like they were coming away from the show with some great new ideas, too. Something to look out for: 0114 438 1880

There’s an old American canard that new camo patterns are more about bagging the bucks in the customer’s pocket than the ones in the woods; but Stoney Creek’s Tuatara patterns look to have what it takes to hide the hunter in the hills and forests as effectively as the secretive New Zealand lizard they’re named after. Eye-catching camo aside, the real selling points of the Stoney Creek range are its rugged practicality, comprehensiveness, and no-compromise commitment to quality. This is serious gear, for serious outdoorsmen, at sensible prices. (https://www.stoneycreekeurope.co.uk)

Camo was catching people’s attention on the Harkila-Seeland stand, too. When I visited, Mark Ripley (a.k.a. “260 Rips”) was doing a video piece on Seeland’s new InVis camo Avail jacket, trousers and cap. Lightweight, sleek and quiet, but also windproof, waterproof, and breathable, it looks ideal for use throughout the buck season. Also appealing are Harkila’s affordably-priced Camo Cover jacket and trousers: an ultralight, packable top layer, fashioned from a tough mesh fabric printed in AxisMSP camo and impregnated with Tanatex insect repellent. Add a veiled baseball cap and a bino-caddy c/w handy elasticated holders for thermals, rangefinders and other items one might want often and urgently, and you’re all set for some great summer stalking! (https://gb.harkila.com / https://gb.seeland.com )

If bino-caddies are your thing it’s worth checking out the new M19 model from Danish designer Christian Saugmann’s Redkettle brand, as distributed in the UK by Raytrade. The M19 is rugged, compact, configurable, and readily combinable with Redkettle’s M20 accessory pouch and Javelin bipod holster. Redkettle also make great Ventile, fibrepile and hardshell jackets, and all their products reflect Christian’s deep commitment to efficient, sustainable and ethical hunting. (www.redkettle.co)

Hopefully most readers are already familiar with Phil Ogden, creator of what is surely the best-designed, best-made and best-value shooting luggage produced in the UK. Phil always has something new that fills both a gap in the market and a real-world need. His latest hot product is the Autoslip: a discreet, quick-access rifle sleeve that installs in your vehicle like a seat-back car-tidy and features 2 typically-capacious, zip-up storage pockets. Unsurprisingly, he can’t make them fast enough! (www.ogdensshootingsupplies.co.uk)

As a recreational shooter I’ve had good service from imported flat-pack high seats, but professional deer management calls for more durable and bespoke solutions, which is what B & D Stalking Equipment provide, along with cold-rooms, trailers and a host of lardering tools and quad-bike accessories. (I particularly liked their 3600 high seat and their custom-made anti-climb panels, which keep would-be trespassers safely on the ground. (www.bdstalking.co.uk)

CAB Animal Transit Boxes are well-established makers of compartmentalisation systems that optimise load space in working vehicles: as well as custom-fitted dog-boxes and drawers for guns, ammo, accessories and tools, they also offer a sled-winchand- ramp combo that makes light work of retrieving and loading even a large deer carcase within cable range. Not unique in the market, or cheap, but exceptionally well-executed and undoubtedly a godsend on a wet night after a long drag! (www.cabtransitboxes.co.uk)

A problem faced by all firearms licence applicants is obtaining medical certification from their GPs, many of whom either refuse to offer this service or charge excessively for it. Medcert was created to provide the solution. For a fixed, and modest, fee they will request your medical records and produce a perfectly-formatted report to accompany your application, whilst maintaining the security and confidentiality of your data. (www.medcert.co.uk)

Attesting to the accessibility and diversity of the Stalking Show, and to its takeaway message that deer stalking is just one facet of the rich and complex web of rural life, was the presence of several businesses specialising in decorative arts and crafts. A prime example is Living Art, a Wiltshire-based gallery whose stand foregrounded gorgeous bronze sculptures by Matt Duke depicting birds and animals in action (a salmon leaping, a cock pheasant rocketing upwards, a cheetah in full stride, a cat about to pounce); flanked by beautiful paintings of deer and foxes by Rachel Wild, and diverse works by other talented artists. (https://livingart.global)

Organisers David and Deanne Freer have been deservedly inundated with positive feedback from exhibitors and visitors alike (almost ten thousand of them). Next year’s show is on April 15th & 16th, at Staffordshire County Showground. Save the date! (www.thestalkingshow.co.uk)