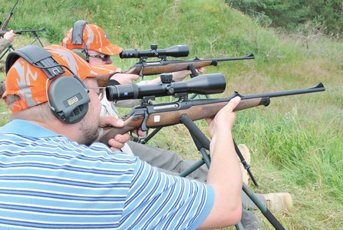 So what is field shooting? The concept is a test of both shooter and rifle and is done in various terrains and requires you to shoot in all different positions with iron sight and optics anywhere from 100 – 600 meters on all manner of targets. In some ways it could be considered practical hunting rifle though there are a number of different classes of competition. The Scandinavians are big into this and the Zeiss-organised ASV shoot and competition at Ulfborg ranges in Denmark was a first for me and a real eye opener too.

I have recounted day 1 in the September issue, but shall recap on the hardware. The whole idea was to allow we gun journalists to go hands-on with Zeiss’ latest scope the Victory HT ASV (high transmission), which offers 95% light transmission, which I believe is the highest yet! It also offers the smallest illuminated reticule (centre dot) too, which negates the problem of large aiming points, which is not uncommon with a lit reticule.

Last month I tested a 3-12x56 Victory HT and found it excellent, this however was the standard version, but they also offer a bullet drop compensation (BDC) model called the ASV, which is what we had in Ulfborg in July this year. For the weekend we were issued with Sauer 202 rifles in 308 Win with iron sights and a Victory HT ASV 3-12x56 in QD mounts, along with a set of triple sticks and a loden back pack. Geco kindly supplied their new 165-grain Express ammo, which is a ballistic tipped hollow point.

In truth there was no better way of seeing how the ASV worked than by shooting it and getting our range drops sorted out on day one. Along with this we did some iron sight works for those like me who are bit rusty and also some running deer and boar with the new Sauer 303 Scyncro semi-auto in 30-06, as that would be part of the competition programme.

ASV is an improvement over the earlier Zeiss BDC system and consists of an elevation turret to which you can fit, alloy calibre-calibrated rings set up for various calibres. Like all systems of this nature it needs shooting at all distances to fine tune it as performance will vary with barrel length, bullet weight and velocity etc. For example one steel pepper popper at a ranged 530m for me required a setting of 560m to hit it square. But once known and noted just click, aim and shoot.

We were split up into groups of five, with a team leader/range officer in charge. The course of fire is all through the woods at Ulfborg on its many and various ranges/lanes and you mainly shoot on realistic, paper, animal targets with scoring rings. These range from racoons, boar and the various deer species, plus a surprise stage, which I will get too. At longer distances steel poppers are used, which give an audible visual register. You can also expect to be shooting off sticks (no bipods allowed), or your rucksack, which I stuffed with pillows to bulk it out. Plus free hand, sitting, kneeling standing with some stages being compulsory iron sights. You carry all your gear and Zeiss thoughtfully did not provide slings (thanks Armin). The weather was baking hot and strolling through the woods with all your gear and water plus 80-rounds of ammo took its toll.

We started on the running boar and deer with the 303 Synchro. Though of no relevance to the UK market I love semi-auto rifles and in 30-06 Springfield the Sauer 303 makes a great choice for driven in Europe. The deer is double-ended at 100-yards, so makes two passes, which for us Brits was a long way and something I certainly do not do. To make matters worse there’s a massive, electric score board that shows your hits and misses to the world.

On the boar we shot two at a time with targets set one above the other on the moving backer. I made the classic mistake of forgetting which was mine and stuffed up. I was happy to take my mistake but I was allowed to shoot again and did quite well. But as ever the Europeans are aces at this as they do so much of it. One of our group, an Austrian, was an absolute wizard with irons, he explained that they do a lot of tracking and follow up on wounded boar and it’s all very close and personal and irons are the only way to go; respect!

Then it was off on ‘the long march’ or armed nature ramble to the various tasks. Most stages required 12-rounds so your loading was also tested as rifles only had a single mag. The high seats were interesting as they had doubtless been designed by a sadist and had no real side support and a low, non-adjustable front bar. Though seated; getting a solid position was not easy, which showed in the scores I think we were shooting at 350m on this one; great fun! But a superb and challenging test of marksmanship.

Iron sights, well we don’t do enough of that in the UK either, and standing at 100m proved a test of skill, which did and didn’t work for me. Likewise sitting and kneeling, all of this was an education as I simply do not practise it enough, which is something I will be addressing! Shooting, standing off sticks at 500m+ was great – dial in the ASV setting (don’t forget), wind the power down and drift into the target as staying solid at that distance is all but impossible. I got my release down well and found drifting in from the left and firing when I was about six inches away rang the steel, not every time but every clang is a result!

At one stage or another all of us forgot to re-set our ASV turrets with disastrous results; I challenge anyone who uses a BDC scope who says they have never done that. This to me is the issue with a dial-in system and is a mandatory action and check. Given the 202s were standard sporters they stood up well to having a lot of rounds put through them quickly in terms of consistency; especially with the hot weather!

We moved from stage to stage getting hotter and more tired but enjoying ourselves immensely, doubtless this enforced walking adds to the challenge, just as it would on a real hunt. The surprise stage was called Hatari, here we put down our normal 202s and got to shoot the Hatari version with iron sights, which is their big/dangerous game gun. Chambered in 458 Lott, a sort of 458 Win Mag on steroids the targets were full colour paper buffalos with the backs showing all the vital organs. Two distances - face on at 25m then side on at 50m. It’s a big gun and cartridge but that Lott Use enough gun; the Hatari surprise stage was on buffalos using the Sauer 202 Hatari in 458 Lott; piece of cake…was surprisingly well behaved given its primary purpose; we all loved it judging from the smiling faces. Just hold on tight, grit your teeth and squeeze!

Tired, sweaty and some with bruised shoulders from shooting a lot of 308 in a reasonably short time; not me I hasten to add, we finished the course. I admit to being ‘fried’ by the weather as the last couple of stages proved hard and I was no longer at full concentration. But I was happy and did not make a fool of myself. Marching back to camp I headed straight for the bar and downed two bottle of ice cold Carlsberg quick smart; it never tasted so good! As it happened; top three places went to a Swede, a German and a Dutchman and all well deserved too.

This - my first field shoot - had taught me a lot. I know I can shoot well, but the large amount of mandatory unsupported work along with items like sticks and positional requirements, none of which I do a lot of was a serious wake up call for me. I may be a well-rounded hunter in shape but I am not that well-rounded in all aspects of positional work.

This will be easy enough to remedy as it’s just a matter of setting aside time to practice with my chosen rifle – off sticks, kneeling, standing unsupported at appropriate ranges. Then take these re-learned and near forgotten skills out into the field when I’m hunting and rely less on a comfy high seat or a bipod and more on my ability as a competent and all-round rifleman.

Overall a great weekend, the Zeiss Victory HT ASV scopes proved their promise and I have one coming for a long term test soon. Likewise and though I don’t own a Sauer 202 I have gained a lot more respect for the brand as I hammered a lot of ammo through it over two days, some of which hit what I was aiming at! My thanks to all the Zeiss, Sauer and Geco crews who all helped to make such a memorable and enjoyable event. Speaking to Armin Dorbat (Zeiss) told me that he has something similar if not better planned for next year. But if you want a challenge and a serious test of your skills then take a closer look at Field Shooting.