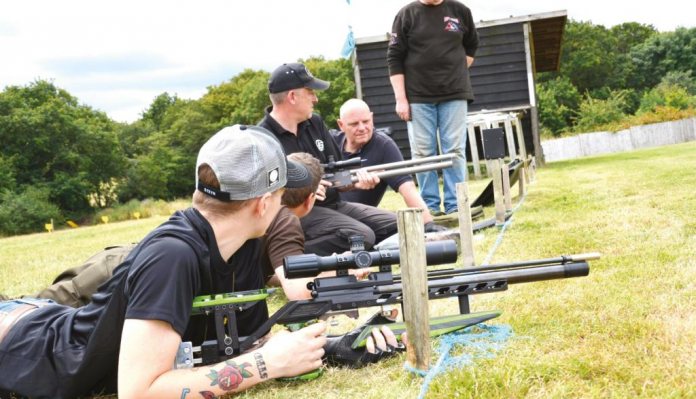 The aim of this series is to produce a primer with two objectives, to instruct the novice in the craft of air rifle shooting and to encourage the more experienced to develop their skills to a higher level of excellence. Let us begin our education by answering the question, what is the purpose of the air rifle? There are three, rabbit hunting, pest control and target shooting, which can be sub divided into informal target, Field Target (FT), Hunter Field target (HFT) and Olympic standard target, which is beyond the remit of this series.

Informal shooting is practised on a non competitive basis, usually on the shooter’s property, as a means of pleasure, hours of fun being had in the back garden knocking down one target after another. This activity has another, seldom recognised benefit, it requires the mind and the body to work in union in a relaxed and highly controlled manner, removing tension, which is the target shooters enemy, making it the perfect way to combat the stresses and strains of modern life.

The air rifle is perfect for back yard use, firstly because it’s power level, starting at 6 to 8ft lbs, is so low that it is safe to use in enclosed spaces when the correct range protocols are employed, which we shall look at latter in the series. Secondly, the muzzle signature generated is quiet enough to prevent the creation of noise pollution, thus you can shoot in built up areas without fear of offending your neighbours. Thirdly, the reasonable cost of ammunition means that you can have hours of fun on a weekly basis, without breaking the bank.

For those who seek to test themselves in a competitive arena, there are the massively popular sports of HFT and also FT. Basically, this is a course of metal knock down targets in the form of different quarry species, set up across farmland or through woodlands. For those who want the experience of hunting but might not want to kill a living creature, they are near ideal choices. Requiring, as they do, pinpoint accuracy from a number of mandatory positions at ranges out to 50 yards. The major difference being there’s no stalking required.

There are clubs all over the country for this kind of shooting and they are always welcoming to newcomers and will provide all the advice and tuition you need to pursue this sport to what ever level you desire. Equally, there are classes and grades and so you can shoot a spring gun or a modern PCP. If you have never shot before and wish to become a hunter, some months practising HFT is the perfect way to gain the required level of skill before shooting at living creatures.

Another purpose for the air rifle is for the killing of a variety of animals and birds, as laid down in law, for two distinct reasons. One - rabbit hunting, the taking of wild rabbits for the table, a legitimate objective, especially in these times when farmed meat is so expensive. Two - Pest control, which is the killing of species, such as the rat and the feral pigeon, on the grounds of protecting human health or crops from serious levels of destruction. One of the most common queries as regards the use of the airgun for these activities is, does it have sufficient power to kill the target quarry cleanly? If you skilfully place the pellet in the kill zone of a rabbit, the largest animal it is permissible to take with a non FAC air rifle, it requires 4 ft/lbs of energy to do the job humanely.

A hunting air rifle producing the maximum legal energy level of 12 ft/lbs, when the pellet leaves the muzzle, therefore has the power to kill a rabbit cleanly but bear in mind that with every yard it travels it sheds power! Assuming it exits the muzzle at 12 ft/lbs, at 20 yards of travel have 9.5 ft/lbs, after 30 8.6, and after 40 7.7. A rabbit shot at 30 yards with a rifle of this nature will be struck with roughly double the amount of energy required to kill it, which is the desired margin for a humane despatch.

There are several factors why so many favour air rifles over firearms for rabbit hunting. It is far easier to gain permission from landowners to use the former on their land. The latter may massively out strip the air rifle in the power department, say 1000 up against 12 ft/lbs. However, there is a downside too, every shot taken has to conform to very strict parameters relating to what is termed the backstop. This concerns the topography of the ground beyond the target, so that any missed shot goes safely to ground before it can do any damage. Get that wrong with a bullet and the results can be devastating. Safety parameters do exist for the air rifle, but they are far less demanding.

As mentioned earlier, air powered guns generate a low muzzle blast; as a result, they do not scare away quarry with their report, nor do they alarm humans in the vicinity. These positives also relate to pest control, but the air rifle has several other benefits in this field of activity. Pest control often takes place within agricultural or industrial buildings and the less power you have in a projectile in this kind of environment when it misses its target, the better from a damage to the building point of view and also in relation to ricochets.

Pest species, by their very nature, usually present themselves in large numbers, it is not uncommon for feral pigeons or rats to be shot in the quantity of 50 – 100 or more with the shots being taken rapidly one after the other.

There is one further purpose for the air rifle; as a training tool for firearms users. Shooting is a degradable skill, if not practised on a regular basis, your levels will drop. Plus, it is not always easy for the firearms user to get to the range on a weekly basis to practise but they can retain their proficiency by practising at home with an air rifle. Next time, we shall look at the attributes required in the hunter, the construction of a range for informal target shooting and range protocols.