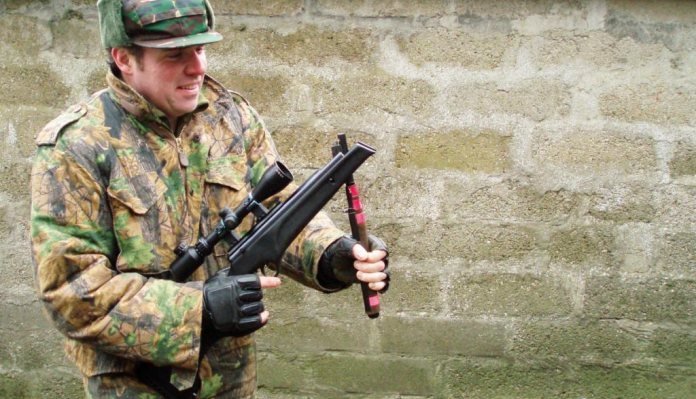 The most common types of air rifle are the pre-charged pneumatic (PCP), spring-powered (springer), gas ram and CO2 powered. The PCP has an integral air reservoir (either fixed or removable) that must be filled with clean air; with the damaging dirt and moisture removed from it. The reason, both corrode the inside of the reservoir and the channels down which the air travels and can block it too.

To fill a PCP with air, you have six options; 1- your local gun shop will fill it for you, 2- purchase a high-pressure divers air tank with special fittings that will allow you to do it yourself. These can be filled at your gun shop or diving outlets. 3 – get a dedicated, hand-operated stirrup pump, however, it takes a lot of physical effort and time to do the job, which could put you off, 4 - have it filled at a dive centre if they have the appropriate connectors. Some will, some won’t, best to ask first, 5 - buy a specialist compressor if you have about a thousand pounds to spare. 6 – your local club might well be able to offer this facility too.

You should by now be realising that the PCP is not a self-contained, pick up and go rifle, like the spring gun, which we shall look at in a moment and this is one of the reasons why some shooters decide against it. However, most offer a multi-shot facility with a quick-change magazine system. Squeezing the trigger opens a valve, which allows a precise amount of air to be released from the reservoir, which will enter the barrel and propel the pellet. The smooth nature of the release makes them near recoilless and in consequence very easy to shoot. Many modern examples will have what is called a regulator that keeps the shots consistent within a few feet per second, so you can know your velocity will not change for a good number of shots.

With the larger calibre firearms, recoil can have a real kick, and this must be managed through good technique, in order for accuracy to be achieved. The almost total absence of recoil from a PCP means they are very easy to shoot and forgiving to poor technique. The downside is that this can lead someone self-taught to develop fundamental errors in their technique. Chances are too they will not recognise these because they are achieving good levels of accuracy, but these errors will prevent them from reaching their full potential.

PCPs are the most accurate of all the air rifle types; some who use spring guns will argue this point, but it is beyond dispute, unless you are referring to very expensive specialist recoilless models developed for target shooting. Think of the PCP like a car with automatic transmission, it does a lot of the work for you. The spring gun in comparison is a brutal thing, it has a cylinder in which is located a powerful spring with a piston on the front. Some form of lever, this could be the barrel on a break-action type, or an under-lever on a fixed barrel design.

Regardless, they allow you to compress the spring and set it ready for release when the trigger is operated to reassert itself. Violently hurtling down the cylinder forcing air from it and into the barrel to propel the pellet. Technically speaking, the springer produces negligible recoil, as this term refers to movement created by the forces used to propel a projectile down the barrel. What most people refer to as kick is in fact a jerk caused by the spring when it is first released and again when the piston on its front almost smacks into the face of the cylinder and bounces back violently off a cushion of air.

Rather than recoil, a better term would be spring jerk. To master this takes much practise using the proper body position, controlled breathing, gentle trigger operation and a feeling for the rifle, generically known as ‘follow through’. To illustrate how challenging, it is to master this phenomenon, some time ago I coached a teenager who thought he was a good shot because he could score well on a paper target using a PCP. When I put a springer into his hands, his shots were spread wide all over the paper.

If you want to become a true airgun shooter; begin with a spring gun, just a basic run of the mill rifle and when you can consistently produce a 2” groups on a paper target, move on to a more sophisticated type; in this way, you will build a firm foundation to your shooting technique.

CO2-powered rifles operate in much the same way as a PCP, but use a replaceable, CO2 cartridge (usually a 12-gram charge) but there are larger capacities, to provide the propulsive force rather than air. They cannot be refilled, so if you shoot a lot it can prove expensive. A unique feature is the large number of high capacity repeaters available, often looking like military rifles. Entertaining when it comes to informal target shooting, but they have no practical application. Hunting guns are few and far between and generally for shorter ranges only. Being a gas, CO2 is susceptible to extreme temperatures, which can drastically affect the power output.

The gas ram is essentially a springer without a spring. Instead, it uses a sealed gas strut or ram that is compressed and releases in the normal manner, with the piston head attached to the top of the ram. It is said to be smoother in operation, but I find little difference in the jerk factor. As a final thought, let me just say that spending large sums on money on a rifle is not going to make you a better shooter! Good technique is what counts, a good shooter with a standard air rifle can produce a ½” grouping, if they then use a more precision design the improvement will be by fractions of an inch. This small increase in accuracy is important if you wish to compete, and even more so if your objective is hunting. Next time, we shall start to study shooting technique.