Getting Started in Airgun Shooting 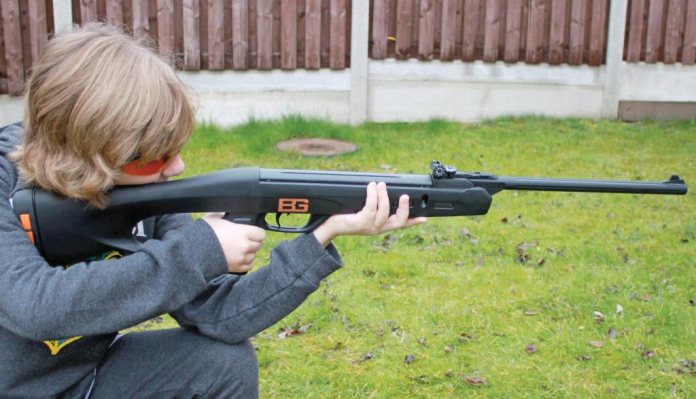 We all have to start somewhere on our shooting journey and luckily there are a few junior rifles to choose from now. My 10-year-old son George was urging me to get him started. He has seen me reviewing guns since he was born; in fact, I started it 10 years before he was born. He has shot a junior gun or two in his time, so was indeed perfect to give me a junior shooter’s thoughts on the new Gamo Bear Grylls Scout Adventure set.

Gamo also make a ‘Young Explorer’ set for real beginners with a shorter stock. That’s has been out for a while, the new ‘Scout Adventure’ set is a step up. It is mostly synthetic in construction and it really looks the part. The gun is totally black, apart from the BG Bear Grylls logo picked out in orange on either side of the stock. The other splash of orange are the three rubber blocks inserted in vent holes in the butt pad and the Gamo logo cut into the orange cap of the pistol grip. I was also struck by lightness of the gun; the steel barrel is encased in more synthetic material. This really takes weight out of the gun. This is very important for a smaller shooter, whose muscles have not developed yet to be able to hold up a heavy gun. George was the real tester here and he noticed too the gun was lighter than the majority of junior rifles he has shot in the past.

In his own words, he said the gun looked “modern”, which it does in spades compared to the wooden stocked junior rifles he has shot in the past. My advice to new shooters is always to start with open sights. It’s like when you learn to drive, you don’t dive straight into an F1 car! I started with open sights also back in the day and it’s the perfect way to introduce a shooter to gun use. When you start someone shooting, the main aspect you are teaching is safe gun handling, not how to shoot. That comes later, after they have shown they can operate the safety devices correctly and actually charge or cock the gun, load and point the gun safely. George can do all of that and we started with the very good open sights.

The sight base on the Bear Grylls Scout Adventure rifle is 378mm. The rear sight is fully adjustable, with a windage wheel on the right-hand side, this has clear white marks, 0 to 9. The 21mm diameter elevation wheel is marked up the same to keep it simple. In the box, Gamo supply a tin of pellets and 50 targets, very generous, very useful. The tin of 150 pellets are lead flat heads, made by Gamo but with a twist. The hollow point has a plastic orange cone fastened in, they call the pellets ‘soft points’. They are .177 (4.5mm) and weigh 7.87-grains, the cone improves the aerodynamics massively over a conventional flat head or hollow point. Over the chronograph, the gun ran at 3.2ft/lbs with the pellets supplied, which is perfect for back garden or short-range use. The gun has a manual safety catch situated within the trigger guard, right in front of the trigger blade. This needs to be set on safe by pulling it back towards the trigger.

To start the cocking stroke, the rifle needs a firm tap with the palm of the hand to break the barrel latch. The barrel covering and the barrel latch are both made of tough synthetic material. Once broken and pulled all the way back to set the trigger, the gun can be loaded; the rifled steel liner of the barrel can be seen at the breech, the synthetic outer with steel barrel is a patented process by Gamo. The gun has the sealing O-ring around the transfer port within the action, not around the breech, this protects it from damage – clever!

It is also fitted with an ‘antibear trap’ device, to prevent the barrel from flipping back closed accidentally. This is a very safe gun for juniors, but the junior still has to be taught safe gun handling. The underside of the trigger guard also has an S and F with an arrow to show users how the manual safety catch operates.

With one of the supplied targets set out in our purpose made back garden safe pellet trap/ shooting range, George got to shooting the Gamo. He was wearing EN166 rated shooting glasses, of course. The open sights don’t have any sighting aids but are perfectly adequate, as George showed as he began to shoot. It had been a while since we had shot, so George did return to shooting with a common habit of new shooters, we called it the “Meerkat”. His head would pop up off the stock immediately after firing the shot, the pellet barely having time to exit the barrel. This of course ruins the shot. What you need to do with a springer is ‘follow through’, the shooter stays on the aim until a full second after the pellet has struck.

This is basic technique that once learned with the springer can hold the shooter in good stead, whatever they go on to shoot, be it a PCP or something bigger. It’s also the reason I go back to a springer on a regular basis. If you do not follow through, you will never be able to hit anything with a recoiling spring rifle. When George began to stop doing the “Meerkat”, the pellets began to hit the bullseye. The stock on the Adventure Scout is ambidextrous, so useable for left or right handers. The thumb hole is massive, so it’s not really a thumb hole in that sense. The trigger pull on the gun is fairly light at 1.8kg; it’s not too light as to make the gun skittish. A really light trigger on a beginner’s gun is, in my opinion, a bad thing.

The rifle also has a 155mm long 11mm optical sight rail machined into the top of the steel cylinder. So, you can fit a scope or red dot as the shooter develops. George and I fitted a red/green dot sight on our next session with the Gamo, George did like this better, it’s true that a dot sighting system is easier to line up on target than open sights, but my advice is not to jump straight to an optical sight, get the safety stuff sorted and teach open sights first. George commented on how much he liked the design and feel of the stock, I had a shoot too and the pistol grip suited both his small hands and my larger ones. We soon got through the Bear Grylls pellets, I would go onto a flat head pellet, so that the holes show up clearly when shooting on paper, the only drawback with the 50 targets supplied in the kit was the cool camo pattern did make it hard to see where you were hitting sometimes, unless you hit the bright orange bullseye, where is showed up great.

The Adventure Scout set by Gamo is a very modern, lightweight spring rifle, ideal for junior shooters. Coming in at a mere 2kg (4½lbs) the gun is very light. I asked George what he didn’t like about the gun or what could be improved; he said that he couldn’t find anything wrong with it! It’s fair to say it got the George seal of approval. Next time, George steps it up another gear and reviews the BSA Ultra JSR precharged pneumatic air rifle.

Thanks to Simon and Hayley at BSA for help in production of this article.