Blast from the Past - Lee Enfield 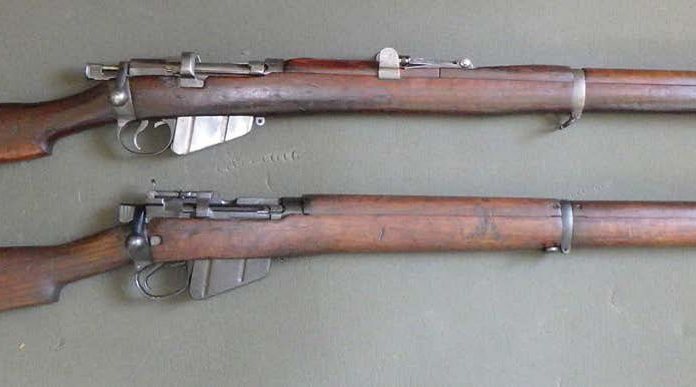 While newer calibres can often seem more enticing, there is still a lot of enjoyment to be had from some of the older guns and calibres that are available today. Lee Enfield guns served as this country’s main military rifle for many years in the hard-hitting .303 British calibre, and they remain popular amongst shooters who enjoy historical calibres. Having not spent much time with this type of gun, or this calibre, the author was fortunate enough to get hold of two Lee Enfields, from Henry Krank & Co. recently and found that they offer a very serviceable and enjoyable alternative to their more modern counterparts.

The two versions of the Lee Enfield on test were the Enfield SMLE dated 1918 and the Enfield No.4 Mk1 Long Branch dated 1956. Both are bolt action guns, each with a 10-round magazine and adjustable rear sights. The barrels are fully enclosed in wooden forends and, although they show signs of their age with a few knocks and scrapes to the woodwork, they are in pretty good condition.

The intention here is not to give a history lesson, interesting as these guns are, but to take a look at how they shoot. After a bit of a clean-up and lubricating both worked absolutely fine and mechanical function was very good. The rifles are very heavily engineered, no doubt a result of the manufacturing processes and materials available at the time, and this is probably why they have lasted so well and continue to function. The rifling in both bores looks to be in good condition and the twist rate looks tight.

Factory ammunition is readily available, in the form of PPU’s 174-grain FMJ BT cartridges from Henry Kranks. At £86.70 for 100 rounds this ammo is well-priced and very good quality. With a published muzzle velocity of 2461fps and energy of 2340ft/lb it is hard-hitting stuff and you do feel it in the shoulder when shooting. Although the .308 Winchester is actually that little bit more powerful, in practice the .303 in these particular guns felt a bit harsher in recoil but not unmanageable or uncomfortable.

First up, the SMLE loaded and cycled very smoothly and the magazine fed without any problems at all. With these rifles cocking on the forward stroke, as opposed to cocking as the bolt is opened like most other bolt action guns, the bolt slides forward very easily up to the point where the cocking mechanism engages and then you feel a significant increase in resistance to the bolt continuing to travel forward. This takes a bit of getting used to, but once you have learnt to overcome that increased resistance cycling the bolt becomes easy and smooth. The rear ramp-sight is graduated from 200- to 2000-yards and shooting at that maximum distance would be something of a challenge. Target shooting at the lower end of this range would probably be the way to go if you want to achieve any sort of group. Firing from a standing position the gun performed very well and was great fun to shoot. It is heavy but well-balanced and it sits nicely in the shoulder. The sights are basic, but give a decent sight picture, and are very easy to adjust. The safety catch is large and clunky, with an elbow-like catch that has to travel a long way between the safe and the fire position, and it must have been difficult to operate quickly in a combat situation. It is not possible to move the safety catch without taking your finger off the trigger.

The No.4 Long Branch is very similar, with the same cocking mechanism and safety catch, but the sights are a little bit better designed and easier to operate and the muzzle end of the barrel is presented a little differently. The sights consist of a peep sight and a flip up ladder type sight for longer distances and they work very smoothly and easily. You can tell that this is a ‘modernised and improved’ version of the SMLE and the sights are significantly better. This rifle felt more comfortable to shoot and the action cycled that bit smoother, possibly a benefit of it being that much younger! The weight of the gun soaks up a lot of the recoil and it also felt easier on the shoulder than the older gun.

Both of these guns showed that there is a lot of enjoyment to be had with these old work horses. They are superbly engineered and a challenge to shoot and you can’t help but think about some of the history that they may have seen and experienced. It is hard to imagine using these guns on the battlefield because, compared to modern rifles, they seem slow to operate and the safety is not particularly well positioned or designed, but for target shooting these are not significant issues and the rifles are great fun and accurate to shoot.

The rifles are very wellpriced and you certainly get a lot for your money. If you want an alternative to a modern hightech gun, with all the whistles and bells, then a Lee Enfield may just be the gun for you.

If you are looking for something that bit different, with historical significance and in a great calibre, the Lee Enfields are definitely worth considering. Henry Kranks & Co. carry a large range of Enfields and if you visit the shop it will take a good few hours to look through them all.