Getting Started in Rifle Shooting 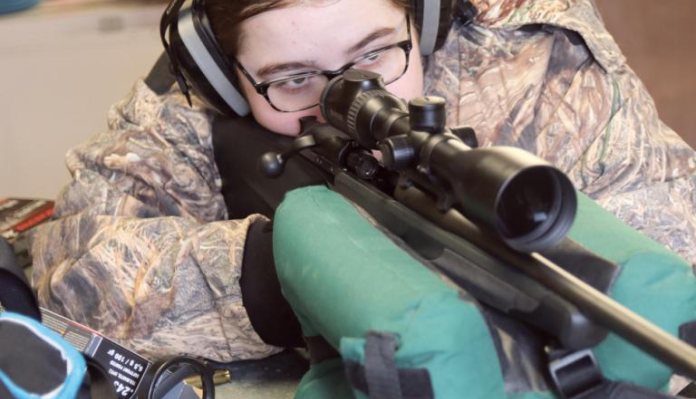 My old man was a fisherman and tried to get me into it, as I assume he thought I would want to do it, or he just needed a donkey to carry all his gear. He was very wrong, as I found it boring, so it never happened. however, had he been a shooter, it would have been a different kettle of fish, as since I was old enough to steal my brother’s Guns & Ammo mags, I was hooked! My dad was very down on Junior Special shooting, so I made my own way, which as a youngster was not easy, but over many years, with help from friends and those prepared to offer good advice, I made it. But I swore I would never make my children like shooting, unless they wanted to.

However, shooting needs to survive and prosper and we constantly need new people coming in; so, who better than youngsters? These days, many of them have been seduced by the PC and games, which is having a knock-on effect that we see every day. This story is about getting them involved and I have written it from a personal stance, as my son, Jake, and daughter, Chloe, are as chalk and cheese in terms of shooting. But first, a bit of legal.

The words here are ‘under supervision’, as in the UK, children under 18 cannot loan or buy a gun and ammunition. But, if they are 15 and over, they can, under adult-supervision be allowed to shoot. This is the path I took with Chloe, as she was showing an interest in shooting as early as seven, whereas Jake never really did, and like I said, I never pushed it. Some of my friends were amazed that he was not interested, but also intrigued that my girl was, others were horrified! Females shooting? Bah, humbug! They’ll want the vote next!

I’ve been teaching people to shoot most of my life and conclude it needs to be initially fun and done with the right equipment. From here, you can gauge the direction your proto-shooter might take. I have seen too many people give a first timer a gun far to heavy recoiling, just so they could laugh when they got the shock of their lives; great way to put people off. As an end piece to this feature, I asked Chloe to write down her thoughts on what she calls her journey from a 7-year old to a young woman of 20, but, as she calls it, first – The Talk!

Safety is paramount, as most youngster’s idea of gun handling either comes from games like Call of Duty or action films. Without going overboard, or trying to frighten people, (seen that too many times too) we must impress on our fledgling shooters the seriousness of the equipment that they are handling, as one slip can mean disaster. Like they say, once you’ve pulled the trigger you can’t call the bullet back, which, with proper training and the correct mindset will never happen! It’s a question of balance, as you don’t want to scare them, nor make them too blasé.

My view is that a rimfire is the best training tool ever – light in recoil, easy to handle and with good accuracy potential, and once they put up a few groups they are on the path. The law says ‘under my supervision’, so Chloe can use any of my firearms and I chose my Smith & Wesson M&P 15/22 semi-auto rifle as her first rifle. Though some might disagree, it fulfills both the fun factor and learning about safe handling and general operation. I firmly believe the fun factor is important, as I’ve seen youngsters taken down the dictatorial, pure target route by shooters who take it far too seriously and seem to feel it’s their duty to suck all the enjoyment out of the process. Often as not, they have lost their student who gets bored, deciding shooting is not for them, and that’s another one lost forever!

The Talk for me, consists of the following: Explaining what guns can do, good and bad, and not to be afraid of them, but respectful and responsible; the safety catch, though a physical control, it’s your brain and finger that are the true safeties; gun handling, load/unload/stoppage drills, finger on the trigger only when you are ready to shoot etc.; shooting etiquette – never point a rifle, loaded or empty, at anyone, be aware of muzzle sweeping in all situations, listen to and obey what you are told on the firing line, when not shooting keep away from the firing area and never pick up anyone’s gun without permission and always check it’s empty; safety rules – always wear eye and ear protection and make sure others on the line are too before firing.

Getting to know you

I commenced Chloe’s introduction to the Smith with dry (no ammo) training, to get the gun handling slick and instinctive and to start getting safety ingrained. When I was satisfied, I got her to fill the magazine, load and fire it off; purely for the feel of it. From there on in, it’s coaching to improve technique and accuracy, discus how/where to aim with both iron sights and optics. After a few sessions, I knew she was ready to go solo, so I gave her a course of fire and instructions and just stood back and let her carry on. Though I trust her completely, there’s that little trepidation when you let go the reins for the first time, but she did good and more importantly was enjoying and learning at the same time.

I then switched to a rimfire bolt-action, to show here that it was very different to a semi, she did not like it so much at first, but soon got the hang of the manual operation. The rimfire training went on for some time, as she was not that keen on my larger calibres. But eventually I thought it time to move up if she wanted to. She shot my .222 Rem custom CZ527 and Mauser M03 in 6.5x55 and thought it a bit kicky and heavy but understood the difference of a full-bore. She declined my 270 Win Blaser R8, which I warned her would be a thumper. It seemed obvious to me that 243 Win would probably be her perfect centrefire cartridge; good for varmints and deer and accurate for practice. This is where we are now, and I’m probably going to get a 243 barrel for the R8, as that makes most sense.

Training slowed down when she went to university, though she shoots with me when she can, but it was when she said she wanted to hunt that I got very excited, which is where we are now. We’ve been out a couple of times with no success, but it’s giving her experience. Whether she carries on or not is down to her, I think she will; if so, it’s time for the certificate. But at least she’s pro shooting and a hopeful addition to the next generation.