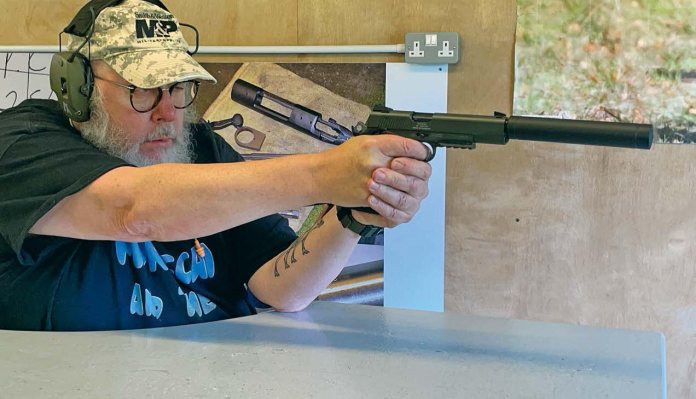 After the handgun ban that effectively deleted all standard, rimfire and centrefire pistol-types, we handgunners were pretty much left out in the cold. Legal requirements meant that any firearm of this type had to conform to a number of criteria. The oddest was the creation of a new Section 1 category: The Large Firearm. This stipulated that the shortest any could be was 24” overall with a minimum of a 12” barrel. We initially took this prohibition onboard by reducing the prolific Ruger 10/22 semi-auto rimfire rifle to these dimensions; no handgun yes, but a way for many action/ practical-type disciplines to continue.

However, it wasn’t long before some clever people realised this could be applied to handguns, providing they were built at source in this format and we soon saw the rise of the long-barrelled pistols and revolvers (LBR/LBP). The earliest and simplest designs were wheel guns from the likes of Uberti, with their single-action Cattleman (Colt Model P) and Ruger, with their Super Redhawk. All they did was extend the barrel to around 20”, so from the butt to the muzzle, it was 24” long. In a word, horrible, as you might imagine, with handling akin to a boat anchor. However, if the gun could be fitted with a fixed butt extension; sometimes called a wrist brace, AKA a coat hanger, then the barrel could be reduced to 12”, providing the whole thing was still 24” long. Handling and shootability were massively improved.

Like any firearms ban, there was a deal of illogical thinking from HMG. For example, you could have an LBR in both rimfire and centrefire calibres, but semi-auto LBPs were only allowed in .22 rimfire. Saying that, I did shoot a prototype fullbore semi with what was a similar concept to Southern Gun Co’s lever release system. HMG stamped on that right away, as they did with the LR rifles much later.

Edgar Brothers Ltd imports GSG (German Sport Guns) rimfires and the manufacturer makes a .22LR 1911, so they agreed to make an LBP version. These guns have been around for some time now and feelings are very much mixed, with both praise and brickbats from many shooters. However, they are well priced and offer ex-handgunners a functional, single action, semi-auto pistol-type, that has re-started many pre-ban disciplines like practical pistol, which is brilliant!

Looking at the EB website, they bring in a single model; the GSG 1911. This follows the build of the standard Colt 1911A1, with just a few minor differences, which do make it a tad more shootable. Most obvious are the 12” barrel, complete with a dummy/ over-sleeved moderator, which seems to be compulsory on all LBPs of this type. The coat hanger is made of steel, permanently fixed and fits around the base of the mag well, plus it offers a chute that makes magazine changes that bit easier/faster. It’s slim and has a small counter-balance weight at the rear to improve balance.

More subtle are the spurless, Commander hammer and upswept grip safety (more of that later). The trigger is adjustable and the safety catch is now ambidextrous, with larger thumb plates for easier operation. Oddly enough, they have not extended the slide release catch, nor the magazine button. The sights are a definite improvement over the original fixed front blade and basic U-notch at the rear.

Both front and rear units sit in dovetails and are secured by Allen screws, so allowing easy, lateral adjustment. The rear is taller and both show Hi-Viz inserts (2 - rear, 1 - front) for easier acquisition and alignment. Also included are 5x front blades, each of different heights, that give elevation correction, so the taller it is, the lower the point of impact. Saying that, I found my example shot very high with standard velocity ammo, even with the tallest in place.

The trigger weight can be adjusted by winding in the Allen screw inset in the blade. To be honest, the pull was very heavy from the box and I think I used up most of the adjustment before I got it down to something more manageable. It turns clockwise to decrease and anti-clockwise to increase. Even then it wasn’t amazing, but certainly better. GSG includes all the relevant Allen keys, a snap cap and a spanner, plus EB throw in their 1-year, no quibble guarantee.

Another feature is the short section of Picatinny rail under the frame, for light or lasers. The grips are standard, chequered slab plates as per the original and although brown like wood, they are plastic. Nice too are the four finish options; blued, stainless, tan and olive. My tester was in the green and it did look the business! With a plastic hard case and tools etc, the whole package retails at a very reasonable £415, although a spare mag as standard would be the cherry on the cake!

So, if you’re not familiar with how the 1911 works, I’ll take you through it. First of all, the gun is single-action (SA), which means the hammer must be cocked prior to firing. After that, the slide cycles for each shot and sets the hammer automatically. This is old school, as there are other LBPs that offer double-action (D/A) operation. Here, you can trigger cock the first shot, which is faster but less accurate. So, in many ways cocked & locked is better due to its improved accuracy potential and the fact it’s safer when drawing from the holster.

The magazine holds 10-rounds and inserts into the base of the grip, where it’s retained by a transverse button (mag catch) positioned at the rear of the trigger guard, on the left. It’s the ideal position for a right-handed shooter, as it sits near under the thumb and you can retain full control of the pistol as you eject it. After the last round has fired, the action locks open, ready for the reload. Here, you slap the full mag in and press down on the slide release with your thumb, and then you’re back in action.

One aspect of the 1911 that came to light was the magazine capacity in relation to the slide position. Practical-type shooting is a dynamic discipline using fire and movement and you might be required to do a mag change on the fly. Running dry (empty mag and slide locked rearwards) might incur penalties; well, it certainly did when I shot PP!

A full magazine goes in and locks easily with the slide open, however, if it’s shut the catch does not engage with a full complement of 10-rounds. So, it’s down to the shooter to understand this and prepare accordingly.

A stand-out feature of any 1911 is the grip safety. This shaped plate sits at the rear of the grip frame and is designed to press in as the firing grip is made. For this to function, you have to make the proper hold and in doing so, it frees the trigger to operate. The rear section is upswept to protect the web of the hand from possible hammer strike.

Personally, I don’t like any LBP layout, as I find it long and unhandy. This is down to the simple fact I shot normal pistols for many years. However, they are nonetheless fun to shoot and more power to those who do, as it’s the next best thing.

Edgars also import Hornady ammunition and supplied some of their Varmint Express, 40-grain round nose .22 Long Rifle ammo, quoted at 1070 FPS. Reliability with any semiauto is paramount, and to test this I added some Remington sub-sonics, MagTech round-nosed lead and some of Winchester’s 42-grain MAX sub. To its credit, the 1911 ate it all, without a single stoppage. In the end, I reckon I put about 400-rounds down range without any issues.

There are those that bad mouth this pistol, but having tested one previously with near similar results, it’s hard to find fault! As I said earlier, with its good price point it won’t break the bank and for me, a singleaction, cocked & locked, semi-auto of any calibre is still probably the best way to go. Accuracy-wise, well, shooting any handgun is not easy and my game has gone to hell since the ban deprived me of proper handguns! At 15-yards, supported I was shooting 1-2” groups, which was not too bad.

There may be better LBPs out there, but they will probably cost significantly more than the GSG and most of them are from smaller operations, so supply and spare mags are always an issue. I think a friend of mine from the practical days summed it up best: ‘it works, it’s a good price and if it wears out quicker than others, I’m still quids ahead when I have to buy another.’ Not for me, as I have explained, but overall, one heck of a gun and as always with anything on test, I enjoyed myself immensely.