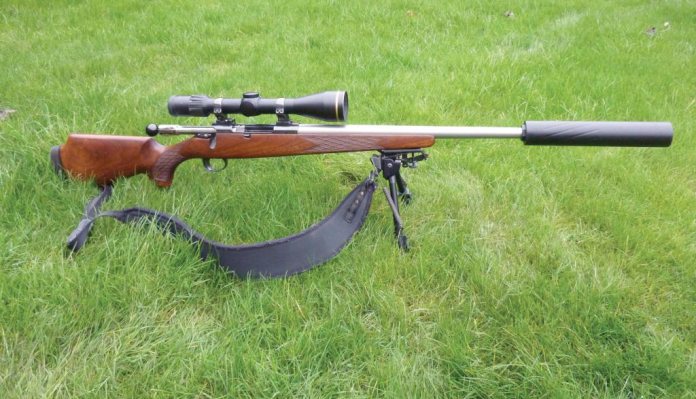 How often do I need to clean my rifle? I realise April is probably the start of the season for many in Southern England, as the roe bucks are now shootable. For me, there are a few Fallow spikers to take, however, amongst the out of season does, it’s not a productive month.

Instead, it is time to spend some hours cleaning the rifles. Not that I don’t keep an eye on them over the winter; if they get wet or muddy, then I do clean and dry them thoroughly. A round sticky patch over the end of the barrel (muzzle cap) or moderator will stop most of the ingress if the rifle is dropped, but apart from a siliconeimpregnated cloth over the bolt, which keeps the action slick, I don’t tend to do much to each rifle on a daily basis.

To clean or not?

Many years ago, I used to clean the barrel after every outing, but two events changed my thinking. I hosted a German acquaintance for four days stalking, and in conversation he said he rarely cleaned his rifle barrels. Goert was meticulous in every other respect, so this rather took me aback, especially when he confirmed the zero of his rifle on arrival and shot a perfect cloverleaf about 2 cm high. The second event was at Bisley. I had been shooting some targets and running boar on the BSAC range day (which is good fun, if you have a chance of attending). At the end, through a cold barrel after some 55 rounds, I shot a .75” group, 1” high, which was exactly where the clean rifle shot at the start.

This got me thinking; how often do I need to remove the carbon and copper? I’ve since lengthened the time between cleans progressively, such that this past doe season I shot 67 and 54-rounds through my .308 Mauser M03 and 6.5x55 Varberger respectively. No loss of zero; in fact, both are tack drivers. If I had the time and inclination I would go to a range and see what a further 40-rounds, (so totaling 100) would do to the accuracy, but I have neither.

I find it’s now convenient to clean, as I do realise that accuracy will eventually suffer if I never removed the build-up in the bore. It’s a balance between too little or unnecessarily often. Currently, I also make a new batch of rounds for each rifle and shoot a few alongside what remains of the old batches in preparation for the harvest buck and the main doe culls later in the year.

Should we all be doing the same? Your rifle may or may not be able to shoot some 60-rounds without losing accuracy. You should check it out at the range on paper targets before extending your cleaning regime alongside deerstalking activities. I did a little internet research and discovered a whole range of methods that seem to work for other rifle owners. There are F-Class bench rest shooters who clean every 80 to 100 rounds, or second competition. Others scrub every 30 or between details at the range. Some stalkers clean even if they have only shot 1 round, others say they don’t clean their rifles so much, but seem coy about numbers!

I did question if too much fouling could harm a barrel, but most gunsmiths just say they have seen more damage done by poor cleaning technique than by shooting. I take that to mean a heavily fouled and coppered rifle could be brought back by a thorough cleaning!

For a bore solvent, I use Patch Out; many shooters use Bore Tech Eliminator, a broadly similar product, which both leave a clean barrel without scrubbing with a brush. I simply run some coated patches on a jag through the bore, with the vital aid of a bore guide and plastic-coated rod. I let the chemical do its work for 20-minutes then run some dry patches, then wet and dry again in another 20-minute cycle. If necessary (usually not) I leave the barrel wet overnight, pointing downwards, before more dry patches; when they come out clean, then I deem it clean!

I tested the product at first, cleaning again with Sweet’s 7.62 copper remover and Shooter’s Choice right after using Patch Out. Nothing further was removed, the patches came out clean, indicating a good job done first time round. I’ve used Patch Out ever since!

Two other things should be considered. Firstly, does the rifle shoot to point of aim with a clean barrel? My 6.5x55 does, the .308 prints about .25” high for the first shot, nothing to worry about in the field. With an older and perhaps pitted barrel, it’s said the copper stripped from the bullet as it passes down the bore infills the pits, making a uniform path for it to travel down, so may need half a dozen shots after cleaning to get the bore to settle down. If I needed to do that on an otherwise good standard production rifle; I’d have it re-barreled with a stainless match tube, no question! Aside from better accuracy, a match barrel would have been lapped, removing imperfections, so making it less prone to copper build up and easier to clean.

The other point regarding a free-floating barrel, which most modern rifles have. It’s easy for debris to become lodged, unseen, between the barrel and channel in the forend, which can greatly affect accuracy. I do check this every time I put the rifle away by running a thick piece of card, bent into a U shape, along the gap between the stock and metalwork. More than once I’ve come across a piece of bark or twig in that small gap. That’s all I do, apart from the occasional bore snake, and have constant, dependable accuracy from my deer rifles. What more do you need?

Some of you may have noticed that in last month’s story on Fallow doe culling a picture of a Sika doe was substituted by mistake, which was our fault and not Larry’s. We apologise to him and you readers for any confusion. Pete Moore (Editor)