Getting Started in Clay Shooting 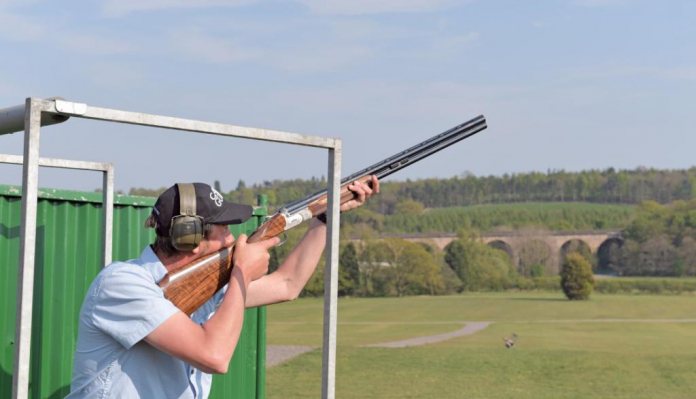 For many shooters, their first taste of clay shooting usually takes place on the ‘Have-A-Go’ stand at one of the numerous country shows dotted around the country.

Alternatively, clay shooting is still extremely popular with corporate and team building events, many a large ground extremely active during the week with these types of outings. Then there’s the charity shoots, where various charitable organisations try their hands at various activities, clay shooting being one of the favourites. This small piece therefore is on how to get started, so it ends the moment you’re about to shout ‘pull’, it’ll also give you the knowledge you require in order to take your first steps into what is one of the most addictive and fastest growing sports, not only in the UK, but most of the western world. And once you get hooked, you quickly realise as to why.

Now, whilst not everyone catches the shotgunning bug, one lady I once taught for a morning, wanted nothing more than to actually hold and fire a gun, certain participants want to know more. And today it couldn’t be easier, the once almost closed-shop reputation of clay shooting now thankfully a thing of the past. All you now need is your smartphone, tablet or laptop and type clay pigeon shooting into a search engine and you’ll be positively swamped with information.

Once you’ve been able to digest even a small part of what you’ll find, your next step, should you wish to continue, is to either contact the shooting ground you had your first go at, or and this is always the best route, find your nearest gun shop. Without fail, the staff, or the shop’s notice board, will be able to give you the name of the nearest ground, a contact name and a mobile number to call. And if you call in on a Saturday afternoon, most of the customers will also be more than willing to help you out. Call made, all you then need to do is turn up; the only equipment you’ll need is a decent pair of shoes or boots, preferably not trainers and some sensible clothing, usually a fleece. Avoid fashionable jackets, they might look good but the usual array of pockets, zips, buttons and poor collar design will work against you. How do I know this? Over the years I’ve had to ask numerous first-timers to remove their ‘don’t I look good, trendy and outdoorsy in this’ outer garments. Nothing beats a basic, plain fleece jacket or pullover. Make sure that you’re there at whatever time you’ve agreed to be at the ground. Whether it’s a big, established ground, or a Sunday morning only affair, somebody will be waiting for you, so do the decent thing and be on time. Apart from that, all other equipment, such as eye and hearing protection, shotgun and cartridges, will be supplied as part of the introduction. But even before you head out of the clubhouse or cabin, you should get a basic introduction to how a shotgun works and all the safety aspects that surround clay and any other form of shooting. Always remember, shotguns don’t kill or injure people, people kill and injure people, usually caused by sheer stupidity of handling.

Depending on you and your physical build, the person giving you your initial introduction to it all might decide that a 20g or a 410 is more appropriate. Don’t worry about it, smaller bore shotguns are lighter to hold and initially easier to use and shoot with if your more slightly built, or of a smaller stature. If you get into it all, you’ll move over to a 12-bore soon enough.

To start with, you’ll be shown the different parts of a shotgun, how it works, how to hold it correctly and what a ‘sight picture’ is and what you should or shouldn’t see when the gun is mounted against your shoulder, where your head should be, the correct stance, along with the fact it needs to be unloaded and in a slip to be transported between stands and what your fellow shooters will expect of you and how to behave.

Unfortunately, I’ve seen more beginners start larking about, confident in the fact they think they know it all after a couple of lessons, than I care to think about. Shotguns, especially loaded ones, are serious pieces of equipment and need treating as such and with respect. The stories about ‘unloaded shotguns’ going bang are numerous, so please ensure you don’t add to the list.

As regards costs, more formal grounds will charge about £35 for an hour-long lesson, that’ll include all the kit you’ll need, use of a shotgun and a box of 25 cartridges and approximately the same number of clays. Less formal clubs, especially the Sunday morning ones, tend to charge less, since their overheads aren’t as high. That said, a box of cartridges cost the same wherever you are, so expect about £6.25 per 25 shells. Gun wise, it could even be a shotgun belonging to the member who takes you round and gives you the basic training and introduction; remember, a thank you and a cup of tea usually goes down extremely well.

So, you’ve had your first official ‘go’ at clay shooting and you’ve decided it’s the sport for you. The ground you’ve just been to will be more than willing to help you out, especially if you decide to join the club. This also means that to start with you won’t have to run out and buy a shotgun, most grounds having ‘club guns’ that they loan out to beginners, mostly for free but some do make a very small charge if only for maintenance and occasional replacement.

The most time-consuming part of taking up clay shooting is all the paperwork you’ll need to fill in for your shotgun certificate and everything that goes with it. And like your initial introduction, most of it is now conducted online, to which end you’ll need to visit and download from the following websites which are: www.gov.uk/government/ publications/firearms, www. gov.uk/shotgun-and-firearmscertificates, www.cpsa.co.uk and www.shootinguk.co.uk. There’s plenty more to visit but these are the most important ones, especially the ‘gov’ ones, since it’s through these that you’ll apply for your shotgun certificate. Apart from these, all you actually need is a copy of your favourite shooting magazine, Gun Mart!

Within these informationpacked pages, you’ll find numerous adverts for shotgun cabinets, skeet vests, any other clothing you might think you’ll need, hearing and eye protection and cartridge bags and belts. Alternatively, head over to your nearest gun shop or country show, as you’ll find everything you need, often at special show prices. And remember, you don’t need all the latest fancy gear, you’re starting out and more often than not budget kit is just as good and will often outlast the more expensive examples.

To make sure you’ll be granted your Shotgun Certificate, you’ll also have to buy the correct grade steel shotgun cabinet. You’ll also have to have it installed in the most appropriate location in your house, using, might I add, expansion bolts and be constructed to the appropriate British Standards. It’ll also need to be placed out of sight from anyone looking in and as a rule, bolted to an external wall. There are the occasional exceptions but not if you live in a modern house with the latest concrete block or plasterboard and wooden framework internal walls.

When it comes to the correct shotgun, just like learner drivers, many of those starting out like to buy the same make and model of shotgun they’ve learnt with. If said shotgun is one of the more popular makes, my advice is to look for a decent second-hand example, otherwise you could end up spending thousands of pounds you don’t initially need to part with. For example, a nice, used Miroku MK38 Grade 3 will cost you far less than a brand-new version. Alternatively, there are plenty of brand-new, sub-£1000 Italianand Turkish-built shotguns to be had, such as the Redolfi EOS and Brixia ranges. Both offer tremendous value for money and excellent levels of performance.

Remember, a fancy, expensive shotgun doesn’t break clays any better than a cheaper example, providing it fits you correctly and you’ve paid attention to your instructor; it’s the person holding the gun that matters the most. Another personal example, I once consistently beat another shooter at Compact using a Russian-built Baikal that cost less than £600. The shooter I beat was furious that he couldn’t score more or hit as many clay targets as I did, since he was using his new £3000 Italian 12-bore. To prove the point, we swapped 12-bores and I still beat him, although for some perverse reason my fellow shooter wasn’t as annoyed, since he’d been bested by not only his own shotgun but one that cost far more than the 12- bore I’d lent him. Go figure?

So basically, at the outset, all you need to start out in clay pigeon shooting are three basic things, which are access to the internet, the latest edition of Gun Mart magazine and some spare time to go and visit your nearest gun shop or clay shooting ground. And that literally is it! So off you go and enjoy yourself; be it as a Sunday morning regular, or the next World Champion, it really is all the same at the end of the day!