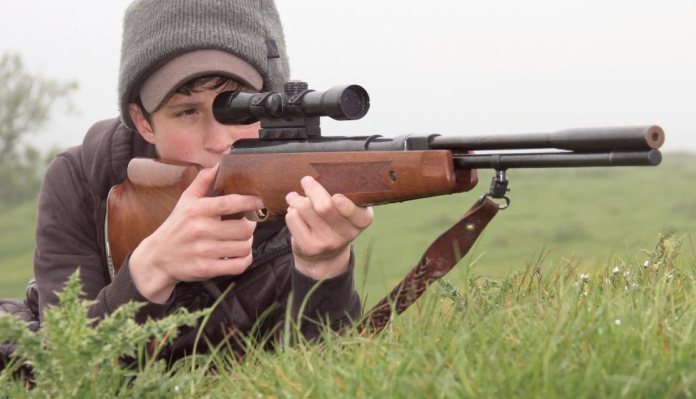 It hardly seems like yesterday when I started out on my shooting life, all those years ago. It was so long ago that I applied for a shotgun or Firearms certificate, that other than renewals, it has been interesting seeing the criteria needed these days to have my son, Jake, apply for both his. We have always shared an interest in shooting, strange that! Tuition on airguns to start with, soon progressed to shotguns.

This is a real minefield these days but a necessary evil, especially with a shotgun, as the Junior Special Bruce Potts looks back at how he introduced his son, Jake, to the sport of shotgun shooting… Jake’s progress law regarding age for shotgun use by a young person is very different from that of a rifle. Personally, I would get advice from your local Firearms Liaison Officer (FLO) as they are best educated to advise you on all the latest laws, requirements, safety and security requirements. It is pretty common sense really and getting advice from the horse’s mouth, as it were, will put you in good stead in case you misinterpret the legislation.

Personally, I would highly recommend buying the excellent book from Bill Harriman, called Law and Licensing, a concise guide for shotgun and rifle owners. It is available direct from the BASC, or as I did, bought from Amazon for approx. £12.00. It will be the best money you have spent, as it clearly goes through all aspects of the law and there is a good section on law regarding the younger shot.

With a shotgun, the Firearms act of 1968 states no minimum age for the grant of a shotgun certificate, unless the applicant does no reach the requirements of being a prohibited person, would provide a risk to the public or has no good reason to own or use a shotgun.

Very sensibly, the younger shot will need to be interviewed with the parent or guardian present to assess the suitability and even then, there will be restrictions on use. These are primarily that a young person granted a shotgun certificate cannot use a shotgun without the supervision of an adult over the age of 21 years or older until they are 15 years or over.

A young person is also restricted from being able to buy or hire a shotgun or ammunition until they are at least 18 years old. There are also restrictions/ exemptions on loans, being a member of a club, on private land etc, I am no expert; so, buy Bill’s book and stay on the right side of the law, I keep it in the car, just in case!

I would also recommend joining the BASC, often a family membership is beneficial, and in that way you have access to a huge library of knowledge. You also have third party insurance and help or advice on shotgun certificates, getting permissions and law etc.

This is the best advice I could give; Jake, like me, prefers rifles but he is an accomplished shotgun shot now, only because I did not teach him my bad habits, I sent him to a teacher first. By learning the basics and proper gun hold, swing, safety, follow through and sighting, Jake now has a very good basis from which to venture out on his own and decide on whether the game or clay he is shooting is a safe shot, achievable, or to let it go. We both regularly go to

Guy Bond’s of GB Shooting in Whitchurch near Aylesbury for Jake’s continued clay pigeon tuition. Yes, you have to pay for it but it is money well spent, as it will increase a young person’s abilities and also selfconfidence, which as a parent, is your ultimate game plan in life.

Guy Bond is a superb teacher and just a really nice chap too, which really helps, he makes his tuition sessions personalised and fun and Jake learns technique correctly and at a speed that is right for him.

His average scores have progressively increased and Guy on his great clay grounds can give you a superb variety of clays to simulate game from any range or angle, without having to move from clay launcher to launcher.

Neither Jake or I are clay shooters, but it is that vital practice and expert tuition that Guy Bond gives that translates directly to the woods where we shoot. I can highly recommend him in turning yourself or young person into a safe and competent shot, well Jake, I am still pants!

It also stands a young shot in good stead when it comes to applying for a shotgun certificate, if they can provide evidence and references from a recognised shotgun tutor.

There is nothing better than venturing to the woods with your son or daughter to hunt, it’s a great bonding session and one that hopefully they will remember into the future. It’s times shared like this that form character and responsibility in a young shot. It is also the time to experience the times when you see nothing or miss; again, all good training for the future young shot. It is also great to take them off that dreaded social media!

Shadowing me on private land has been a real treat and help to Jake’s development, as I can directly pass on my knowledge of the ground to him. Safe access/exit points, as well as footpaths, are embedded into his mind and all the likely places that game will be found explained. It is also a great time to sit, chat and run through where and when rabbits are most active, explain crop rotation and pigeons flight routes. As he learns, he can then in time be left to venture out on his own but at the moment it is very handy when out, as he can carry all the kit!

It is also really handy and good for development if, as a young shot, you help out on a local farm or shoot. In that way, you have access to a lot of opportunities to advance your knowledge. Old keepers and beaters all have their opinions on what’s best and that can be an education in itself! Helping out as a beater on shoot days is not only good fun, but without knowing it, you are always learning as you go. You also have the opportunity to help out with pest control duties and pen/hedge repairs. If you prove yourself a reliable young person, then you will often be asked on a shoot day and also when your certificate is granted the land owner is more likely to grant you permission to shoot there. This is one area that is always difficult to obtain i.e. permission to shoot, but with the proper training and BASC membership, it all goes a long way to help in this regard.

The fun part and as a youngster, using a ‘proper’ gun is always memorable. Regarding shotguns, you have really quite an array of suitable guns to choose from but not all are suitable. The trend I guess is to start them off on a clapped out .410 but that can be detrimental to moral if poor results are the norm. Obviously, the stature and size and age of the young shot will dictate the size and calibre of the gun they learn on.

I would actually recommend a .410 to start with, as it is one of my favourites, but I would steer clear of the knackered old break barrels and bolt actions. Do it right and get a good side by side or over and under. They are really cheap these days, thanks to the Turks! Firms like Huglu, Yildiz and Kofs offer some superb little 410s and for really no money. I would also look at a good second hand one too, in case they don’t like it. I would also recommend on any 410 to get a single trigger variant, to stop confusion with double triggers and also from a safety point of view.

Jake used my old Yildiz side by side 410, it was non-ejector but light to use and threw good patterns; he soon learnt his and its limitations. I also would say some of the second-hand 410s from Browning, in the Citori or 425 series, are also very good investments. I have this philosophy now that if you buy a good one, then they won’t need to trade up and it makes more financial sense in the future, rather than chopping and changing gun each season.

I love the 28-gauge, as like the 410, it recoils less but is a little bit more ‘grown up’ and is a good way into the bigger calibres. I have a Beretta Xplor Lite in 28-gauge; as its names suggests, it is light and being a semi-automatic is soft on recoil too. This point is very important, as you want to breed a confident shot and not one that flinches on excessive recoil. Semi-automatics are excellent for this, but I would still go for a double barrel to learn the basics of proper swing to start with and then branch out to a semi when they have mastered the basics, if that make sense.

Jake wanted a 12-gauge but, sensibly, Guy Bond started him off with a 20-gauge on his clay grounds and now Jake uses exclusively a Browning 325 20-gauge, progressing from 21- to 24- and now 28-gram loadings as he grew. Whilst he is hitting clays with this Browning, why change to a 12-gauge. There’s no point, in my view, especially when he was invited on a beaters’ day and showed up some seasoned shooters with their 32-gram loaded 12-gauges! No comment.

That is the thing with shotguns; like rifles, you can vary the loading to suit the game and recoil it produces and we now reload our own with help from Norman Clark the gunsmith, who has all the kit. Again, an enjoyable past time and good education for a youngster to learn the mechanics of shooting.

Watching and being involved in a youngster’s development as a safe and good shot is very rewarding and great fun for both parties involved. It’s good to watch a progression in maturity and seeing your son learn and form new friendships in the shooting community and eventually go it alone. Start them off right with proper tuition, a safe environment and plenty of encouragement and then that’s the next generation sorted.