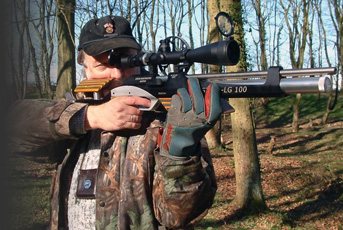 When it comes to choosing and customising ammunition for accuracy, the airgunner loses out hands down to the firearms user for a number of reasons.The latter’s components can be individually loaded and customised to give the optimum performance from a given rifle.

Things like bullet weight, shape, and velocity can be adjusted to suit the barrel of a specific rifle. The cartridge case can be re-sized and adjusted to its exact specifications and the various types of powder and primer can come together to produce the ultimate reload. To put it simply - the power supply and the projectile are all in one package and the rifle is basically a launch platform.

A Little Piece of Shaped Lead

The air rifle is far more complicated. Virtually all the power and velocity metering is contained inside the rifle. The projectile (the pellet), is just an inert piece of lead and restricted in design due to the method of power delivery. It has to have some sort of hollow tail (skirt) to allow it to expand from the blast of air behind it as it travels up the bore. It also needs some sort of waist, which helps to reduce friction, the head and the skirt being the only points of contact with the barrel. This is called a ‘diablo’ shape and it gives stability in flight, much like a shuttlecock.

Throughout this article we are talking about a power output of just under 12ft/lbs of muzzle energy as that is the current legal limit allowed and also the limit set for all Field Target (FT) and Hunter Field Target (HFT) competitions and with that in mind, power would be realistically set around 11.5ft/lbs. The following information will be relevant whichever of the two most popular calibres the shooter uses, those being .177 and .22. There is no difference in inherent accuracy between the two, but there is a pronounced difference in trajectory.

With all this taken into account it means that the shooter’s choices can be narrowed down to just three variables when selecting ammunition.

1. Shape of pellet
In reality there is only one particular shape that offers accuracy and stability while still retaining decent terminal velocity and that is the diablo (described above) with a dome shaped head. As can be seen in the photographs, although various styles and types are available, the dome is time proven for accuracy out to 55yds and this is reflected in all of the pellets shown.

The choice comes down to the manufacturers who tend to produce the same basic shapes. One may have a thicker skirt than another, or the head may vary in roundness or have a `seam` (sometimes called a ‘driving band’) around the circumference. Some will be longer or shorter too.

Some pellets may have a hollow nose (hollow point) which is designed to help stop over penetration and transfer more energy into quarry when hunting. It does this job well at short/medium ranges but lacks long range accuracy. Other are flat headed (Wadcutters) designed to punch neat holes in paper at relatively close range, and ‘pointed’ pellets that claim better penetration for hunting – a problem that really doesn’t exist at sensible airgun distances.

What this series of articles is aimed at is pure and simple accuracy, and with that in mind only pellets with a proven record will be used in testing. Presently it appears that a well-made, diablo-shaped pellet that is completely smooth on the outside with a slim skirt and reasonably deep cavity in the rear does the job as well as it has ever done.

This variation is the one with the most choice. Talking specifically about .177 cal. domehead pellets, the weight range extends from 7.6 to 10.5-grains, although in practice, due to the relatively low power available, most target shooters now avoid the heavier pellets due to their pronounced trajectory problems. This wasn’t always the case.

When FT was in its infancy, shooters used Superdome pellets, mainly because they were the only half decent design available that shot well in their spring-powered rifles. Weighing in at around 8.6-grains, and reasonably well made, these were the choice for some time until pre-charged pneumatics (PCPs) started to appear.

It was then discovered that PCPs could handle heavier pellets with better results and everybody started using 10.5-grain Bisley Magnums. They were extremely accurate but the downside was the more pronounced trajectory. What was needed was something with the same accuracy potential but a lighter weight. Enter the Crossman Premier! At 7.9-grains they were 2.5-grains lighter than the Magnums and could be fired at 820fps and remain legal on muzzle energy. This extra speed meant a much flatter trajectory. The Bisley Magnum, being a heavier pellet, was limited to 715fps to remain within the law.

It was felt by some that the small 7.9-grain Premiers were a bit too light at long range, losing energy and, more importantly, being more affected by crosswinds.  The next stage of development saw the appearance of the super consistent 8.4-grain from JSB. Not a million miles away from the original 8.6-grain Superdomes! The biggest difference was the quality of production and the complete lack of lines or grooves along the outside of the pellet skirt.

This new weight pellet is now used by 80% of target shooters and is available in a number of different guises, being badged by a number of rifle manufacturers. The only difference is in the quality of the dies (that shape the pellets) at the time of production. You pays yer money and yer makes yer choice!

Oh,by the way, what are the other 20% using I hear you ask! Crosman Premiers, Accupells, and Mosquitos. All are 7.9-grains and they all look the same!

Tight or Slack
A comparatively recent trend has been to offer the top grade pellets in three different head diameters. Depending on the barrel used, a tighter or slacker fit may provide improvement in accuracy. It can also alter the ballistic co-efficient and, in turn, the trajectory.

From all this we can assume that from a target shooting point of view, the average FT and HFT shooter uses 8.4-grain pellets fired at around 11.5ft/lb of muzzle energy from a PCP. Other than choosing a good batch, weighing them and perhaps even running them through a sizer, there is not a great deal that can be done to improve things.

Experiments in Accuracy and Consistency

Taking all these variables, a few questions come to mind. Does weighing individual pellets make that much difference or is it a psychological thing?  To what extent does the head size affect accuracy and/or trajectory?

I must admit that I weigh all my match pellets for peace of mind but there are an awful lot of left-overs. What becomes of them? If they are that far off the mark it would be foolish to use them for practice. On the other hand, if they are that close to being accurate, why not use them for competition?

The head size is a bit more of a mystery. I had a strange experience recently when using a different size than normal, and it is that which has led me to once again start investigating my pellets.

It is these areas that I am going to look at in the next few articles and hopefully come to some solid conclusions.