Getting Started in Airsoft - Part 1 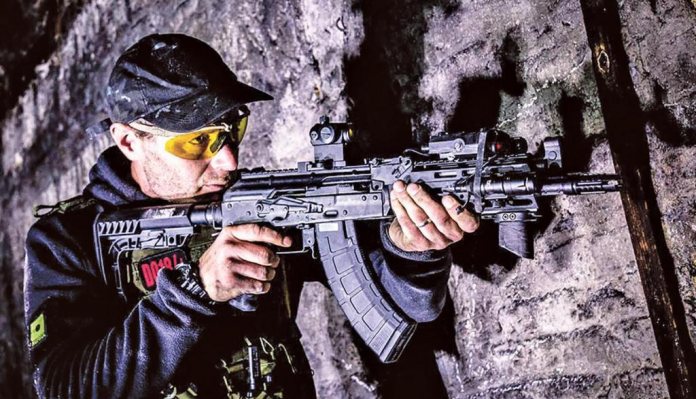 It was November 1994 that I bought my first ever Airsoft Electric Gun, or AEG, and who would have known at that time that airsoft would become a major part of my life, not only in terms of “playing the game”, but in the direction it would send my career! That airsoft rifle was one that today many players mock, the Fusil d’Assaut de la Manufacture d’Armes de Saint-Étienne (FAMAS) G2 from Japanese manufacturer Tokyo Marui, but it served me well and at the time I bought it was pretty much the only option out there!

Airsoft in japan had been going on since the 1980s, and indeed there are a few players I still know in the UK that were involved in the game soon after that, but the arrival of the FAMAS with a thing called “Hop Up” was a revelation even to them! You have to remember that even in the early to mid-90’s the ‘interwebz’ was still very much in its infancy, and dissemination of information was largely by word of mouth. You’d get a telephone call from a mate saying “I’ve heard about X” and gradually you’d learn more. So, it was with my FAMAS, a phone call from a mate, the handing over of a wad of cash, and eventually delivery of a new rifle.

In many ways sites were in their infancy too, and although there were games going on, again you heard about this largely from trusted friends, as most ‘games’ simply involved a few mates on some private land with a few spring-powered pistols and maybe a rifle. Again, the TM FAMAS changed all that for me too.

Suffice to say that time has moved on, and airsoft has moved on too… quite considerably! These days there seem to be new airsoft sites opening on an almostweekly basis, but there are some legal aspects of airsoft that you should be aware of before you set out to your first game!

You and the law

There are many myths out there when it comes to airsoft and the law, but basically put you simply need to have a good reason to own a “Realistic Imitation Firearm” (RIF)! Although there is no such thing as an “airsoft licence” you will need to prove that you have a valid Defence in Law before an airsoft retailer will sell you your first RIF; bizarrely, even if you are lucky enough to own a real Barrett this does not give you an airsoft defence in law, just as an airsoft player may not buy a .50 cal! For airsofters our defence is based on the tenet that we are carrying out a legally permitted activity, which in our case is “the enactment of military and law enforcement scenarios for the purpose of recreation”.

In terms of legislation the Violent Crime Reduction Act 2006 (Part 2 “Weapons” Points 36 to 41) deals specifically with “Imitation Fierarms”, but again simply put if you are 18 years of age or over you can buy a two- tone airsoft gun, one where the PRINCIPLE COLOUR is significantly different from that of a real firearm (i.e. bright orange, green, blue). You can also buy a two-tone airsoft gun and either gift it to someone else or allow them to use it (regardless of their age) and you are not breaking the law. So, as a parent can legally buy a two- tone airsoft gun and give it to your child to use or keep. In basic terms you can only buy a realistic imitation firearm (one that looks like a real gun) if you are at least 18 years old and meet one of the following conditions:

To be clear, if you cannot meet any of these criteria, you can still buy an “imitation firearm”, one where the PRINCIPLE COLOUR is significantly different from that of a real firearm, just not a ‘realistic black’ one!

However, there is now more to this story! As of May 2nd 2017, the latest amendments to the Policing and Crime Act (PCA) 2017 have become law. The act outlines some important changes to the way that airsoft weapons (and I use the word “weapon” here as that’s what the law uses) are classified under the eyes of the law and, as such, it’s very important that you understand these changes to remain safe and legal.

UK airsofters now have firm legal limits to their airsoft weapons and full recognition from the UK government that airsoft is, and always will be, a legitimate sport and pastime, alongside firearm shooting, paintball and air gun shooting, something that the sport did not have previously.

The exemption in the PCA outlines that airsoft guns, regardless of their power source, are not classed as firearms if they are designed to fire a plastic spherical projectile, no larger than 8mm with a muzzle energy no greater than 1.3-Joules (full auto capable weapons) or 2.5-Joules (single shot weapons). Over-arcing the entire PCA is that airsoft weapons must not be ‘readily convertible’ into other categories of weapon.

The rules for airsoft guns are relatively simple; a gun capable of firing multiple shots with a single trigger pull (full auto and burst), must fire below 1.3-Joules of energy, and this is 370fps using a 0.2g BB. An airsoft gun that fires one shot per trigger pull has a higher limit of 2.5-Joules, or 520fps using 0.2g BBs. Above these limits even an airsoft gun technically becomes a Section 5 Firearm, and of course anyone found in possession of a Section 5 Firearm without a license will be sentenced to a mandatory five years in prison. Thankfully nobody has yet been prosecuted (under previous law or current), so this does leave uncertainty as to how they will be treated by the courts.

This is a very basic overview of the current legal situation that faces you as a new airsofter, and I hope that you will understand that ownership of a RIF is not something to be taken lightly. I do not offer the information above as a deterrent to legal ownership though, merely to outline what your responsibilities are as a new player, and to give an illustration of what is currently legal in the UK.

With this out of the way, next month I’ll move onto more exciting ground in preparing for your very first airsoft game, and what you can expect on the day!