Barrett rifles an over view 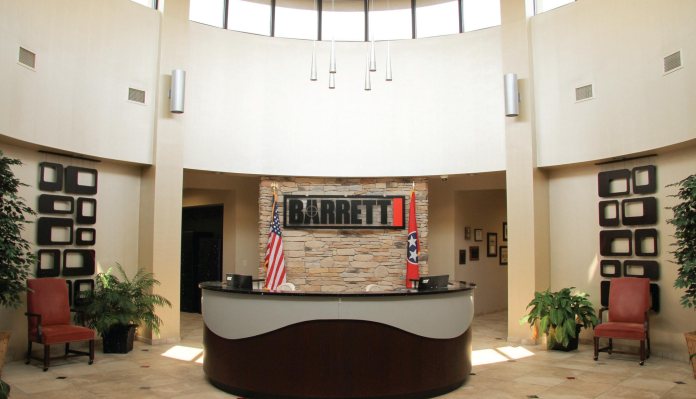 Barrett Firearms are best known for their .50 BMG (.50 Browning Machine Gun) calibre range of rifles for long range shooting. So what plans does this American company have for the UK market following the signing of a distribution deal with Edgar Brothers?

Barrett, the Tennessee-based American firearms manufacturer, has made its name by building large calibre rifles aimed at the target shooting and military markets. Renowned for its highly accurate .50 BMGs, the company is held in high regard throughout the world for its precision manufacturing techniques and close attention to detail.

EDGARS IN THE FRAME

Thanks to a new distribution deal with Edgar Brothers, the UK’s largest wholesaler of firearms and ammunition, Barrett firearms are set to become more widely available in Britain. Consequently, the company expects sales of its rifles to both the UK civilian and military market to increase rapidly, as Jeff Davis, who works in international sales for the company, explains.

“We’re very pleased to have signed the distribution deal and to have built a very good relationship with Edgar Brothers. They are extremely professional and the reputation they have built in the UK shooting industry is incredible. They also represent many top brands, so working with Edgars is a very good fit for us and will certainly give great exposure to Barrett products throughout the UK.”

For Edgar Brothers, having Barrett on its books is hugely prestigious, as Derek Edgar, the company’s Managing Director, comments: “Taking on Barrett is a massive coup for us; it’s one of those high end rifle companies that is known about even outside of the shooting industry and it’s a great brand for us to have on our books. As soon as you think .50 BMG you think Barrett and the brand really is the pinnacle of this type of firearm. Yes, they are expensive but you get a lot for your money in terms of build quality, accuracy and detail and we are all very excited about Barrett’s potential in the UK.”

Barrett’s history goes back to 1982 when Ronnie Barrett set up the company and become the first person to design and build a shoulder-fired .50 calibre rifle. The result, the M82, standardized by the US military as the M107, made the company’s name and went on to be deployed in the Gulf War. Its success led to the development of other models of .50 BMG, including the renowned bolt action M99. Today, Barrett firearms are used by sporting shooters, law enforcement agencies and the military, with the company now selling into 67 countries around the world.

Edgar Brothers will be distributing Barrett firearms to the civilian market via its Shooting Sports and to the military sector through its Policy & Military divisions. On the civilian side, while the .50 BMGs are best known, Barrett also produces a wide range of bolt action rifles for target shooters and/or hunters. These include the MRAD, a bolt action rifle aimed at precision long range shooters, and the uniquely designed super sleek 98B, which offers sub- MOA performance. Both are available in .338, .308, 300WM, 6.5 Creedmoor, and 260 Remington calibres.

“While we expect our .50 cals will certainly be of interest in the UK, we’re expecting good sales of the other bolt action rifles in the retail area, with people keen to buy into the Barrett name and quality,” says Jeff Davis. “Barrett’s philosophy is to build simple weapons systems that are reliable and accurate, with superb attention to detail. Those three elements are key to what we do and the amount of work and machining that goes into each firearm results in superb quality.”

On the .50 BMG side, the Model 99 bolt action is expected to be popular and Edgar Brothers is working closely with the UK Fifty Calibre Shooters Association (FCSA) whose 400 members specialise in shooting this calibre. “We’re doing a lot of work to raise the profile of Barrett’s .50 BMG rifles with Mike Roberts at the FCSA, who we sponsor and who is captain of the Great Britain .50 cal rifle team,” says Derek Edgar. “We’re also working to raise the profile of the MRAD and of the Model 98B Legacy in .338 Lapua Magnum. The popularity of long-range target shooting is growing fast and I expect to see good sales in this area and we’ve received a great deal of interest from retailers now we’ve taken on Barrett.”

Mike Roberts agrees that the market for Barrett rifles in the UK has great potential. “Barrett makes superb firearms and as an Edgar Brothers sponsored shooter, the Barrett M99 supplied to me will allow me to push the boundaries of the weapon system and will be a great advantage for both the practical matches and the ‘King of 2 Miles’ extreme long range competitions, especially when combined with Hornady 750gr A-MAX ammunition which is also supplied by Edgar Brothers.”

The distributor is also looking to develop merchandising products around Barrett: “I want to develop this area and produce some merchandise such as t-shirts with Barrett branding on them,” says Derek. “This will not only appeal to Barrett shooters but to those that don’t shoot but know the brand and like what it stands for.”

For shooters wanting to try or buy a Barrett, demonstration guns are available subject to licensing terms and conditions with Barrett firearms currently being retailed by Dauntsey Guns, Wilson & Wilson, at East Midlands Ranges, and at Osprey Custom Rifles at Diggle Ranges. Edgar Brothers will also be increasing the number of Barrett retailers in due course.

“Everyone at Edgar Brothers is really behind the Barrett brand are we are all excited about working with Barrett to promote and sell their firearms in the UK,” says Derek Edgar. “Their simple yet rugged construction, innovative features such as adjustable triggers, and fatiguereducing designs means that they will be highly popular with target shooters looking for unprecedented performance and ultimate reliability.”