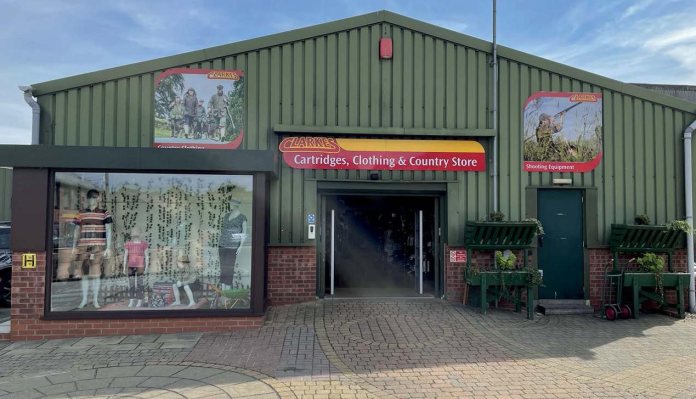 I was shooting at the range when I got an invite to check out Clarkes of Walsham. It has been a while since I have done a shop visit and seeing as it is local to the range, I jumped at the opportunity.

Clarkes is a big operation that is based in Walsham-le-Willows, near Bury St Edmunds in Suffolk. Established in 1908, they have been serving the building and agricultural trades and more recently the public. As well as equine supplies, they also have a dedicated cartridge, clothing and country store.

Upon arrival, I found plenty of parking spaces alongside the store, which is always a good thing! With clear signage on the outside of the building, I was greeted on the inside by a very large and well-lit space and it was hard to miss the absolutely huge selection of clothing that takes up a significant proportion of the store.

The first half is filled with high-quality, smart, country-style clothing for women, including jumpers, shirts, hats and baby & children’s clothes etc. However, it was the second half of the store that interested me the most, as this is where all the more focused shooting/field clothing is, and what a selection! I quickly found products from well-known brands such as Barbour, Schoffel, Musto, Durbarry and Ridgline. Wax jackets, camo jackets, fleeces, gilets, hats, socks, shirts, jumpers, bottles, mugs, gloves, walking sticks, footwear etc. You name it, they have it! They also have a changing room so that you can try on anything you like.

At the back of the store, you will find all the shooting equipment. Now, after a long chat with Nathan (Gun Room Manager), I was told that the shop has been selling ammunition, clothing and cartridges for around 12 years and about 10 years ago, it started selling airguns, shotguns and firearms as well. A big revamp took place about 3 years ago when a new gun room was built and the amount of stock increased dramatically.

Clarkes is the largest shotgun cartridge stockist in East Anglia, with a huge number stored on-site in a dedicated building. There are four large panels behind the tills (along with a very nice coffee machine!) that display a vast array of cartridges and prices from brands such as Hull, Eley, Gamebore, Express, RC and Fiocchi. Also, it’s worth mentioning that they have just become a Cheddite stockist and sponsor the Cheddite Sporting Championship that’s based nearby at Stowlangtoft, which will next be taking place on the late May bank holiday weekend 2023. To further bolster the shop’s integration with the local community, they also supply local rifle clubs with target ammunition.

To appeal to the whole shooting community, there has been a big push towards rifles and ammunition, plus all the relevant accessories and equipment. Starting with ammo, I was pleased to see a decent selection of non-lead that included Fox Classic Hunter (I use these for deer) in .22-250, .223, .243 and 6.5 Creedmoor. Of course, there was also plenty of ammo from Sellier & Bellot, Sako, Barnes, Federal and Hornady. In addition to the centrefire ammo, there was also loads of rimfire ammunition from the likes of CCI, RWS, Winchester, Norma and Eley. Overall, this is not an exhaustive list by any means but shows you that Clarkes is committed to stocking a wide range of factory ammo for all rifle shooters.

If factory fodder is not your thing, then they also stock reloading components. This includes primers, powders, bullets and cases. However, due to the worldwide shortage of a lot of these items, it will take Clarkes a while to build stock levels up.

There are two large Hornady displays in the shop, featuring full reloading kits (press etc) dies, bullets, case lube and tumbling media. There are even loading manuals, scales, case trimmers etc. You get the idea, there’s loads of stuff!

Optics-wise, the shop is a Leupold Gold Ring Dealer, so carries a decent selection of this premium brand. There were also scopes from Vortex, ZeroTech, Zeiss, Swarovski and Hawke, among others.

If it is thermal or night vision you are after, then Clarkes has you covered. They stock plenty of InfiRay products as well as gear from Pulsar, Pard, ATN and Sightmark. Basically, tell them what your requirements are and they should be able to recommend you a product that meets your needs.

Without listing all the products in the shop, they of course stock a significant selection of targets, cleaning gear, pellets, shooting luggage, knives, PCP dive bottles, filling gear and even portable air compressors. If in doubt, just give them a ring and ask!

Again, the gun room is well-lit, so you can see clearly what you are looking at. There is a decent selection of shotguns, as you would expect in a country store, including over and under guns, side-bysides, semi-autos and pump-actions. The usual Browning and Berretta shotguns were on display and these were complemented with guns from ATA, Yildiz, Webley & Scott, Franchi, Breda and Armsan, to name a few.

Rifle-wise, there were guns from Tikka, Ruger, Howa, Bergara, Savage and Sako. There was even a Benelli Lupo. All in all, a decent selection, and if they don’t have what you are after, I am sure they can order it for you.

Outside the gun room, there is a selection of airguns, including models from Weihrauch, Stoeger and BSA. Again, this is an area that Nathan plans to expand. He even hopes to offer a dive bottle filling service.

Overall, a great shop that is following a trajectory of constant improvement. It’s well worth a visit given the large selection of stock on offer, but be aware, you will almost certainly buy something if you go in!