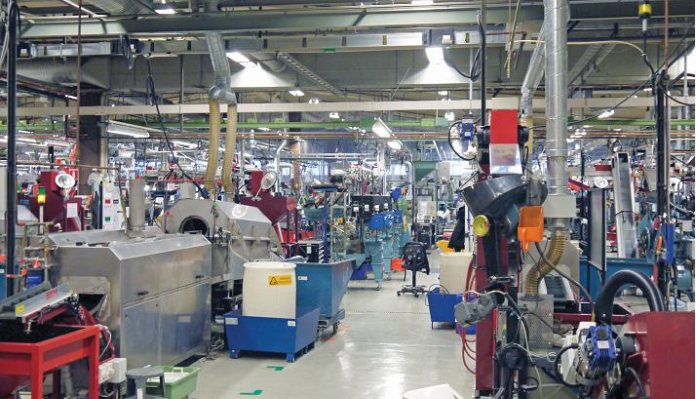 It was in1902 that Norma Amotfors was established by its founder Ivar Engar in Sweden, (who ironically was Norwegian) in the tiny village of Charlottenberg, which is literally a spit away from the Norwegian/ Swedish border and as they say a legend was born. One that has grown into one of the most respected names in ammunition and component production and usage! There were three Engar brothers; Johan, Lars and Ivar who were all shooters, and for firearms and ammunition the late 19th century was a transitional time. The advantages of the emergent smaller bores and smokeless propellants meant greater range, power and accuracy potential.

But to achieve this; the old, full lead bullet was not good enough, and with that the need for jacketed bullets as we know them today was born! Which would have a massive affect on both civilian and military shooting requirements for the foreseeable future. The brothers who were members of the Norwegian Sharp Shooters Movement decided to get in on the ground floor and started producing jacketed bullets. Norma Amotfors was started in 1894 in Oslo, Norway, which proved fortuitous as the Scandinavian countries were just changing to the new smokeless, 6.5x55mm calibre in the emergent Mauser and Krag rifle systems of the time.

The smallbore, smokeless powder revolution finished off hand loaders who up until then had used lead. But Norma’s place in the market would soon allow them to buy jacketed bullets to reload in the new calibres appearing. As an aside the company name was derived from an opera by Vincenzo Bellini, favoured by Lars Engar; I always thought it had something to do with the word Norway!

Reading the history indicates that their project started off with experimentation and looking at or copying other designs and concepts. Given the new nature of jacketed bullets in general it seemed likely that the brothers perhaps did not know that much about what they were trying to achieve. However, after what must have been a time of trial and error they got it right! Their ballistic engineer Karl Wang hit upon the idea of turning the bullet up against a steady rest, which allowed for a precise tail section, which is what steers the projectile. This also produced the first boat tail base as we know it today and proved their secret weapon in the production of quality projectiles.

By 1901 Norma started exporting their bullets to other Scandinavian countries and it was then the Swedish Sharp Shooters Movement got interested and asked them to consider building a factory in Sweden hence the Charlottenberg connection. As well as bullets they also offered reloading equipment and primers to their product line. By the end of that year they now had four employees and had produced 225,500 bullets. Standing in the new factory today and looking at their production counter on bullets, cases and complete ammo, which runs into millions of units; it was a case of ‘small acorns grow into big oak trees’! In 1911 they started building and expanding and have been on this site ever since.

By 1914 they were buying once-fired military cases as well as traded-in brass from shooting clubs and reconditioning and reloading them for the civilian market. By 1917 they were making their own, new factory ammo which offered an affordable and quality product. The next move in 1922 was installing two German reloading machines to increase production. They had arrived and were soon noted as equal to the other international ammunition producers, with Olympic and other records being set with their products. They also helped the Swedish government plant at Raufoss with a huge order for the Turkish military of 40 million rounds of 8mm Mauser and stripper clips as they could not cope on their own!

In the 1920s and 30’s Norma started making hunting ammunition for the first time, with mixed success often having to buy in cases from RWS and other manufacturers. But they eventually got their own production sorted and then as now have the major portion of the Scandinavian sporting market as well as internationally. Through the intervening years the fortunes of Norma fluctuated as did the worlds and they made all sorts of ammo and cases for both military and civilian use, plus cases for the Swedish Bofors, 40mm anti aircraft cannon By the Second World War production was at its highest and after the war things were scaled down a lot.

Post 1945 Norma continued its role of producing top quality target, hunting and military ammunition. In the 1950s the Swedish target market was huge and from a country of just 7 million, there were 2,300 shooting clubs consuming over 40 million rounds per annum.

Again the wheel was about to turn and raise Norma high, as a certain Roy Weatherby turned up in 1953 with some fire-formed cases asking them to produce his range of ammunition and magnum calibres. A role they still do today, as they do for other prestigious gun makers such as Blaser. Nils Kvale head of ballistics said this of the calibres they developed for Weatherby: “He wanted Norma to make his cases like women’s shoes; larger on the inside than on the outside!”

This new direction naturally lead Norma to develop some of their own magnums and I have shot a few, but the one that does it for me is the 338 Norma Magnum; which is a well behaved powerhouse of a cartridge. I liken it to a 375 H&H but in a shorter and more efficient package that will fit standard actions. Of course no discussion of the company would be complete without mentioning their glorious PH range of ammo – nickel cased for reliable feed and extraction, premium bullets for specific needs and the most elegant packaging I have ever seen. Boxes of 10 with each round nesting in an individual slot with a red flock lining, plus bullet placement guide details. Not to forget they also helped develop factory ammo for many iconic guns like the 44 AutoMag and the 10mm Auto Bren TEN pistols amongst others!

With mergers and splits with other foreign and domestic companies and different owners and CEO’s Norma has changed over the years. However, what has not is what they do best; producing top quality ammo and components along with loading data for all manner of shooting needs.

The invite to attend Norma’s prestigious moose hunt last year was a real treat for me, which I wrote up for the February issue. However, we also got the chance to go around the factory. Like many ammunition manufacturers Norma is a blend of old and modern technology, some of the machinery dates back to the 1940s yet is still turning out quality product. But it was odd to see this retro technology alongside modern automated systems both chunking out quality ammo of all types.

The tour started in the board room, where the CEO Paul-Erik Toivo and Fredrik Broström, Sales and Marketing Manager filled us in on the company. Sitting down at the board room table it took me a minute to realise it was shaped like a giant cartridge case; cool! The history of Norma is all around you with old black and white and modern colour pictures of famous shooters with their trophies, along with what must be the largest ammo collection I have ever seen. Which is a visual and historical record of every calibre they have made! However, they are not resting on their laurels, which they could so easily do as names like Diamond Line and Jadgmatch as others are trusted worldwide. But they are also developing new bullets such as the TIPSTRIKE and the non-lead ECOSTRIKE and manufacture the 6xc match cartridge too.

Entering the factory you get hit with that lovely machine smell. The staff seem very dedicated and we were shown the various processes of how bullets and cases were made. Walking past a huge box of virgin 6.5x55 brass made me want to scoop some up! I already mentioned the PH (Professional Hunter) line of dangerous game ammo and I was surprised to hear that it’s all loaded by hand in small batches. Logical I suppose as it’s expensive and not a high production item, though for the job it has to do the personal touch pays dividends!

The reloading side uses both old and new machines, with everything being checked, adjusted and overhauled constantly to ensure a 100% product. They have a massive powder store in the roof of the loading building, which meters small and precise amounts down to the machines. This is done for safety reasons as if something were to occur the main bulk storage is protected.

The staff were happy to answer my questions and dedicated to their jobs. I got the feeling it’s like an extended family too as the majority of both men and women there are keen hunters and shooters. This was born out in the moose hunt as Paul-Erik Toivo and Fredrik Broström were right there beside us along with the sales team of Amund and Kenneth Skoglund and Anders Brolund. It was plain to see they were as keen to hunt as we were.

Shooting and socializing with these people as well as seeing what they do and using their products, just reinforces what I have known for many years; Norma makes some damn fine ammunition! My thanks to all concerned for what turned out to be not only a great hunting experience, but also a very enjoyable visit all round!