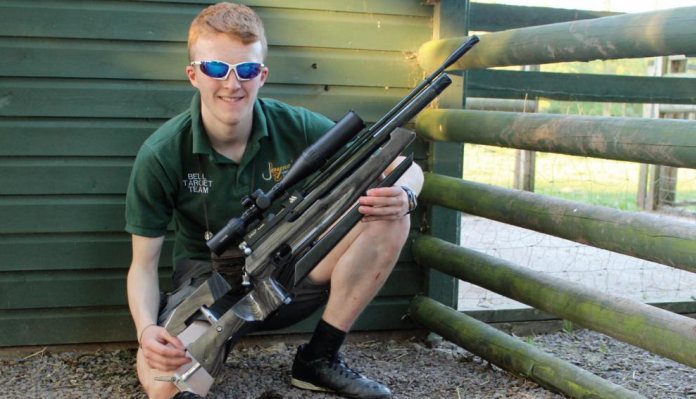 Decoying is a technique that I am just starting to use more frequently. My problem is a very short attention span; so, if nothing happens within the first ten minutes, I tend to just get up and go for a walk, which isn’t the way to be successful. I had been called out to a farm permission that had been having some real trouble with a large population of corvids; mainly jackdaws and magpies. With the lambing season in full swing, these pests were not welcome and needed sorting. It was an area I knew well, and I had an idea of the best place to set up. The weather was great, no wind and very warm, if not a little too hot. I certainly wasn’t going to get dressed up from head to toe in camo, so I needed to make sure I was well concealed in the location I chose to shoot.

I drove up the track and straight away spotted a jackdaw feeding next to the cattle. I wound down the window of the tiny but perfectly formed Fiat Panda and slipped the Air Arms S400 out. I cycled the bolt and fed a pellet into the single shot breech. The bird was not far at all, maybe an estimated 25 yards. I had no need to use the range finder and held the cross-hairs on its head. First though, he needed to stop moving. Whether I made a noise I don’t know but he soon froze. I knocked off the safety and sent the pellet flying. Within a fraction of a second the corvid was rolling around on the floor. The 8.4 grain Air Arms Field had hit home hard, with a terminal head-shot. I was very pleased to have one in the bag, as it could be set up as a decoy, far more effective than the bought plastic ones.

I parked the car and got my kit ready for the evening’s shooting. The scope I used was the Hawke Air Max 4-12x40, perfect for me for this type of vermin control. It’s relatively lightweight but lets plenty of light through, so when dusk comes I can carry on shooting that bit longer and the reticle provides plenty of clear aim points. I also used the Hawke LRF 400 and a pellet pouch, that was me sorted. I picked up the dead bird and headed over to where I thought was a good place to set up.

It was only a 3-minute walk to where I had planned on shooting, but kept my eyes peeled in case there was another opportunity or superior shooting location. I rounded a corner and spotted a squirrel with its head down, foraging for something. I dropped all the unnecessary items carefully, so as not to alert it of my presence and readied for a shot. It was another simple close shot at the 30 yard mark, there was nothing around to rest on, so I took it standing unsupported. With just a tad of holdover, I once again sent a pellet hurtling through the air. It impacted the squirrel’s head perfectly, sending a crack through the fields. A decoy jackdaw is good but a decoy jackdaw over a dead squirrel is better!

I examined the spot where I wanted to go but it was unsuitable. Although I would be shooting into the ground, I didn’t want to risk a ricochet into the land the other side of my boundary, so I had to settle for second best, the field next door. There were not as many birds flying overhead but still enough to give it a go.

I set up the decoy bird 25 yards from where I would be positioned. I just propped it up using V-shaped twig with its head propped in the middle. I then put the squirrel down next to it; belly up. This way it looked like it was having a meal, as jackdaws love carrion. I headed back to my shooting location. It was a shed with some fencing that I could use as a rest. There was a large tree over the top of me, which would help conceal me from birds flying over. I had to think this place through carefully, as I had no camo to help me out.

It wasn’t long before the first bird came in. I was surprised at how bold it was. It landed in the tree just to the right of the decoy. It was peering down, probably interested why the bird on the ground wasn’t moving. I didn’t give him long to think about it. I took up the first stage on the trigger and went though the second stage. Its wings spread out as it tumbled its way to the ground. I jumped the gate and set that one up as well. I thought that the more decoys I had out, the more realistic it would be.

On this location I know that the jackdaws feed in large numbers, so I wanted to replicate that in the decoy pattern. Once again, I was back at my shooting post. There were birds flying over my head constantly, but I just needed one to land. I didn’t have much of a wait before anther was on the same branch as the last. It was calling and not keeping its head still. I decided to go for a heart shot, as this would drop it cleanly, this was also the most stationary part, so go centre of mass!

The s400 barked as the pellet left the un-silenced barrel. The corvid made an unusual sound as it struck mid-call and fell to the ground. It lay there on its back for a while and I left it in case there were more in the area, un-fazed by the crack of the gun. Before I knew where I was, the sky turned black and chaos filled the air. There were jackdaws, crows, magpies and rooks all calling, making an incredible din. A few jackdaws came down into the tree, while the rest stayed high above out of my reach. I shot one and he tumbled down.

Another flew a full circle round and landed again. I cocked the gun and put another pellet in the breech. I did not take my time though and rushed the shot. Perhaps I was effected by the vocal volume of the birds, as I pulled it off to the right. There was still so much noise from the birds around me that it stayed and allowed me a second chance; big mistake! I made sure the second shot did the job. With that, the rest of the birds in the area cleared off and silence fell once more.

I went out for a tidy up, set up the dead birds as decoys and decided for a quick walk just to see if there was anything else about. I was told that there was a large rat population around one of the cattle sheds. I had planned to go out with the Nite-Site in the next couple of nights, so while I was here I thought I’d do a quick recon’ and see the set up options. I wandered round the sheds looking for a good vantage point, and a rat came out from virtually underneath me and darted into the cover of some rubble.

I was in no rush, so decided to wait to see if it came back out. Within a short while, I spotted a nose coming out from behind one of the brick-ends, to taste the air for danger. Good job I didn’t wear any deodorant. He thought it was clear and crept out approximately 10 yards away. As he turned and faced me, it looked like he was chewing on a piece of grain, so while he was pre-occupied, I put a mil-dot on his head and rolled him over. A very nice bonus to an already successful day! I was glad that I now knew where I would need to position myself with the night work. This is the sort of advance prep that saves much valuable shooting time and patience on the night of a shoot.

On my return to my ambush site, there was a bird slap-dab in the centre of the pattern. I wasted no time in adding it to the growing bag. I stayed for another 30 minutes and ended up with a total of 8 jackdaws (not forgetting a squirrel and a rat). This method of decoying really worked well for me and I am looking forward to doing it again with some more preparation. Next time, I will put the time in and build a hide, hopefully this will enable me to shoot even more. The farmer was very happy with the result and I am due to go back next week to try my luck again. Is it luck, or is it field craft? Maybe it’s both but I am realising that the more I learn and the more field craft I have, the luckier I seem to get!