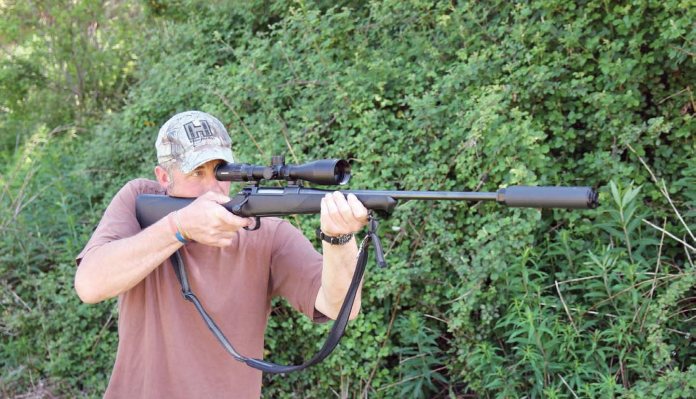 Most deer in the southern UK are shot at 100m or less, most of the deer I shoot are not at dawn or dusk!

The first statement is a general one, often quoted in print and on internet forums. The second is my experience, over more than 25 years of stalking. It is my contention that if these assertions are remotely true, then the current trend for extreme tactical-type scopes and all manner of bullet drop compensation (BDC) system) with a huge objective lens are not at all necessary or desirable!

I am not a Luddite, wanting the return of the 6x42 scope to its former popularity (completely adequate though it is; I own a nice Swarovski in this spec I will be keeping). I do recognise that, having identified your deer through binoculars, it is very nice to be able to zoom in to check those antlers just before taking a shot, making sure it’s a cull buck, not the stronger 6-pointer you wanted to leave for breeding stock.

A big scope is heavy and we all want less to carry when hunting, as a few grams here and there can add up to a lot less hardware on your shoulder, making the day a lot more enjoyable. I see that a certain 3.5-21x50 is 920g, another 5-25x56 come in at 1077g, whereas a typical 6x42 is just 410g. Simplicity does come with less flexibility however. With the increased UK deer population, there are more and more RTAs. If called out to deal with an injured deer, a zoom scope at 2x is going to be much easier to use at close quarters. But at the other end of the scale, nobody needs a 25x zoom for deer. Even at 300m, a very long shot indeed, half that would suffice.

There is an argument for large objective lenses for dawn or dusk shooting, as more light can be transmitted to the eye. It is much repeated that a hunter in their 20s has a maximum pupil diameter of about 7mm, so a 56mm lens at 8x magnification would give the 7mm circle of light (56/8=7), maximising the eye’s light gathering ability. Thus, the 8x56 ‘twilight scope’.

However, an internet search of various studies and reports soon makes clear this a very grey area. A 45 year old hunter may well have a much smaller maximum pupil diameter, so negating the advantage of a large objective lens. Also, just after sundown but not yet dark, are a stalker’s pupils at maximum dilation anyway? Perhaps only 4 or 5 mm; if so, a zoom scope with a smaller 40mm objective lens would be adequate at 8x magnification, giving a 5mm diameter exit pupil.

Step into the light!

I note through my stalking records that most deer I cull are shot at least an hour or more after dawn or well before dusk. I don’t have exact times for this (early, mid or late morning is how I record). Dominic Griffith however does, documenting in his excellent Deer Management* book the times of some 2000 consecutive roe does and bucks culled. He notes that only 2% of bucks shot - just 18 - were at first light, further making the point that these could quite possibly have been shot later in the morning anyway. He goes on to say that the peak time for evening roe bucks shot was 8pm, some 90mins before dusk. Roe does culled in the morning had a clear peak at 8am, well over an hour after sun up, and evening stalked roe does showed somewhat heightened incidence at 4 to 5 pm.

This may or may not hold true for other species; I have experience also of fallow and muntjac, not red, sika or CWD. However, it is interesting to reflect that perhaps the often quoted dawn and dusk golden times may not in fact be the most productive for a shot, and therefore the question - is a 56mm lens on a scope necessary?

I pack up well before last light. I dislike trying to get a shot off at the cusp of darkness, squinting and peering, knowing the pickup will be in complete darkness, hoping the animal hasn’t run on too far and that there wasn’t another deer immediately behind the first I didn’t see.

An area that sees much of the encroaching tactical design is reticle choice. Mil-Dots and other variants have a place in shooting, but for the deer stalker, I’m not convinced for a number of reasons. Either it has to be in the first focal plane (FFP) which changes in size with the zoomed image, or if in the second focal plane (SFP), as are most rifle scopes, and is only precise at maximum magnification.

Their use is dependent on the stalker having the time to adjust and perhaps dial up to the required zoom setting, or input the required clicks into a tactical turret. My experience is that there is limited time, especially with fallow, before a shot needs to be taken or the opportunity can be lost!

Most deer rifles are usually sighted in around 1” high at 100m, so will be about 2.5” low at 200m, which would suffice for virtually all stalking. A heart shot will then be on if the hunter aims dead centre vertically, in line with the rear of the front leg at 200m. Quick, simple and, with experience, intuitive. Will a ballistic whatnot be any better in aiming for the required accuracy? If you are regularly shooting at 250 or 300m+, that is a whole different story (and an ethical one), but I’m discussing here mixed woodland/arable stalking where 200m is a longish shot.

I always find it interesting to look at price versus performance. Personally, I do not believe the 30 to 50% premium you pay for the very best of scopes is necessarily worth the extra 3% performance gained for stalking. For example, one of my scopes is a Leupold 3.5-14x50, which has been in service for some 12 years and it wasn’t hugely expensive! Sure, it’s a little yellow to look through compared to the best of today’s offerings. But it has been completely reliable over those years, holding zero absolutely, come rain or shine, only needing a click or two adjustment with different batches of ammo. After some 1800 deer with that particular rifle combination, I’ve yet to pass up a shot because the scope was not clear or bright enough. I would also say I hardly ever zoom to 14x, most shots taken are at 8 to 10x.

So where does this all leave us? A moderate zoom, no huge lens, proven reliability, a simple reticle, possibly with a red dot (although I’ve always managed just fine without) that will aid in low light. Then a 2-12x44 or thereabouts seems right to me. Most of the time, such a scope would be set and used on 7-8x magnification to match the sight picture of the binoculars, but it gives you options. This isn’t too far from the first 3x zoom scopes seen some 30 years ago, giving a typical range of 3-9x40, but which typically had edge to edge distortions and tunnelled when zoomed. I had one from a respected European manufacturer that failed me spectacularly in front of an audience, but that’s a story for another time. Nowadays, with lenses designed and configured with powerful computers, a 6x zoom has become the norm giving 2-12x, without the associated problems.

Advertised around the £1000 mark, there are all manner of competent scopes available in this configuration. It is not bargain territory, but bargains usually have undesirable compromises. The money saved over a £2500+ fully decked high magnification scope would pay for quite a number of stalks with a professional. If new to deer stalking, these days out will quickly improve your field craft and gain you valuable experience. Far better to be competent with a mere ‘good’ level of equipment as discussed, than viewed as a newbie with ‘all the gear, but no idea’ as the budget was all spent on hardware.

Alternatively, that £1500 would buy a good four days on the magnificent hills in Scotland, the memories of which would last a lifetime, as would these scopes, which come with extensive warranties.

This long preamble explains why I think the scope I look at here, and others I plan to review in the coming months, are more than capable on a stalking rifle. They are also a great choice if there is a chance of an occasional trip to Europe for driven boar or longer shots on the hills North of the border.

*‘Deer Management’ by Dominic Griffith, available from the BDS