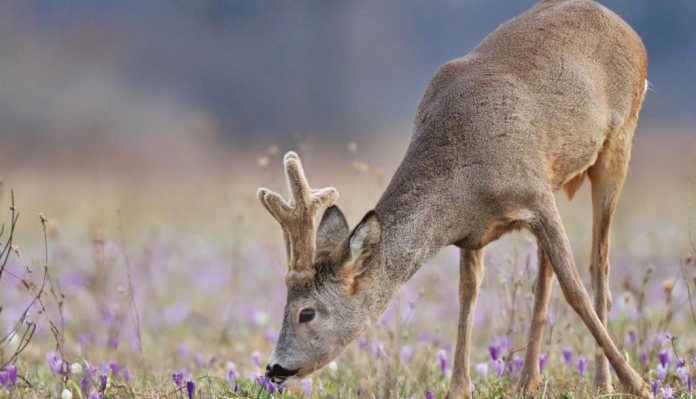 When I started, there were equal numbers of Fallow and Roe, along with just a few muntjac. I would take some 40 of each, mostly does, and perhaps six or seven Munties. We saw them as interesting, busy little animals and would often stop and study them through binoculars, as they meandered across the winter woodland. They mostly disappeared over summer, due to their small size and preference for woodland.

Years went by and Roe Deer on the estates seemed to be getting into a bit of a decline. I’ve documented the reduced numbers of this species before in this column, I think in 2018, blaming an increase in stalking generally, as there is no place for them to hide. Also, I believe that they’ve been squeezed out food-wise, by the ever increasing Muntjac hoovering up young shoots on the woodland floor, while Fallow are able to browse higher than the Roe can reach, so perhaps were less affected?

Fast forward to 2015/16 and we had seen a huge increase in Muntjac numbers, as mirrored elsewhere across the country. An introduced species from China in 1894, in the early years of the 20th Century 1914 onwards escaped deer gradually spread from Woburn Park in Bedfordshire. Releases elsewhere have led to a large feral population, growing exponentially across England, such that now they are found in all counties south of Leeds, except in the very South East and West. They do a lot of damage to young plants, saplings and fruit plantations and, as they have no season and breed nearly full time, have become a pest and are classed as such, with no closed seasons.

I recall shooting 19 in 2015 and 21 in 2016, a tripling of numbers over some eight years previously. With the purchase of a thermal spotter the following autumn, I was able to see many more Muntjac, lying up. I would have walked straight past them without the device. Bearing this in mind, it was decided to go all out and cull as many as possible, shooting them on sight. That year, I shot 28, in 2018/19 32 were taken. I have to say, the thermal helped enormously in achieving those numbers. Unless spotted in the open, Muntjac can lie very still in thick cover and I defy anyone to see many of the total number in a wood when hidden, with just binoculars or a naked eye.

I would have loved to go out with a little .222 Remington or similar when stalking these little deer. I had a Sako in this calibre some years ago; it was light, handy, quiet and stupidly accurate, but I am just as likely to come across Fallow when stalking, and that calibre isn’t legal for the larger species, or suitable for them if it were! So, I shoot all deer with either my .308 or 6.5 Swedish. Neither causes much meat damage with a close-up neck or heart shot from further away with the right bullet.

We now have a much reduced Muntjac presence, but they keep reappearing. No doubt the constantly pregnant does, are able to give birth to three kids every two years, as they don’t have a yearly rut, makes this inevitable. The female kids themselves are able to be impregnated at seven months of age, so one can see how a population can rise quickly.

However, the Muntjac cull has paid off, in that Roe Deer, the only truly native species we have on ‘my’ land, are making a comeback. From a low in 2015/16, where no animals were shot, I see a strong correlation between reduced numbers of Munties and an increased Roe population. Over the doe season, to the end of March 2019, I counted 33 does with last year’s young. I also saw a number of bucks, mostly young and therefore still in velvet well into April; some were strong, four pointers and two just showing six points.

I cannot think of any reason, other than fewer Muntjac, as to why Roe, as a species, have rebounded back so quickly. We still have a sizeable Fallow population, despite efforts to reduce them. The Estates are growing much the same crops and, aside from a few small areas of newly planted saplings, there are no changes to the woodland, either.

Sure, we haven’t been shooting Roe over the previous years, but a resident population wouldn’t suddenly have more mature does with young. If naturally spreading from another area, one would expect to see mainly yearlings, pushed away from the mother’s patch. It could be that areas close to mine have not kept up with a Muntjac cull, their Roe have been obliged to move and have found ‘my’ 3000 acres with a lower Muntjac density. Alas, this is one of the failings of an ‘each to their own’ management program; you may think you are doing the right thing, but next door to you the owners or managers may have a different approach that works for them!

In a wider context, should we be treating Muntjac as vermin? We have half an answer from the government, where it has been illegal to release them into the wild under Section 9 of the Wildlife and Countryside Act 1981, so their advisor’s way back then thought the little deer could be a problem.

Perhaps, if indeed Muntjac are pushing out our native Roe, we should look towards the red vs. grey squirrel problem, where the latter, also an introduced species, have succeeded in eliminating the smaller native red squirrel from most of the country. The red is, unfortunately, never coming back in large numbers. That is an extreme example, as I don’t think Roe will be replaced by muntjac in the hedgerows and more open country of England, but it is food for thought in the woodlands, where they have and are still thriving.