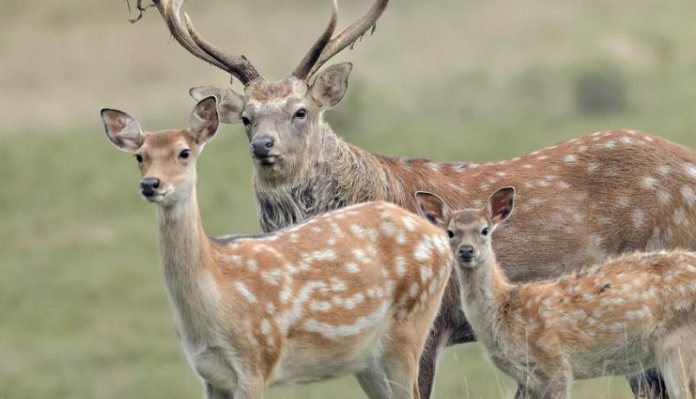 Sika are another introduced deer species, along with Muntjac, discussed last month, and the Chinese Water deer. It’s true that Fallow deer are also not native but having been around for 1000 years + they are more settled here than the three Asiatic species) Our Sika are Japanese in origin, via Viscount Powerscourt’s Estate in Ireland in the mid-19th century. Numerous introductions (i.e. releases) from Bowland Forest in Lancashire, the New Forest, Dorset and Kintyre in western Scotland followed. Fast forward to the 2016 British Deer Society (BDS) survey and the areas inhabited by Sika are broadly around these areas still; only in Scotland have they expanded to the entire western half of the Country.

Male Sika (stags) stand up to 95cm at the shoulder and 70cm for hinds (females). Mature examples weigh some 70kg and 45kg respectively; so, roughly a similar size to Fallow but a little lighter in weight. Back at the larder, dressed but in the skin, a good stag carcass can weigh 45kg or 100lbs and around 33kg or 72lbs for a hind. Sika graze rather than browse, as they have no top incisors but a hard pad like cattle, eating heather, grasses, shoots and shrubs, preferring coniferous woodlands to lie up in. The stags damage trees by gouging the bark, which puts them in conflict with plantation owners and foresters. Sika will also lie up in cereal crops, flattening areas and reducing crop harvest.

Sika have a definite summer and winter coat, varying from a yellow/brown or red/chestnut in summer with spots, to grey and black in winter, stags darker than hinds. The coat is altogether rougher and thicker than that that of the Fallow, with stags developing a noticeable mane. There may not be a defined black horseshoe around the bright white rump, which does not run up the back like a Red Deer, but the coat usually has a dark dorsal stripe along the spine. There is a distinctive white or cream scent gland (metatarsals) on the hocks of the back legs.

The head has a vee of light hair above the eyes, running to the top of the nose, looking like a furrowed brow. Sika heads, in relation to body size, are smaller than those of other deer’s. A stag has a high-pitched squeal, which then turns into a lower pitched cry or roar, while a hind will give a high-pitched screech in alarm as a ‘heads up’ to other deer nearby.

The rut is from the end of September to November. Stags can hold a rutting stand; again, much like Fallow, or occasionally defend a group of hinds from other males, like Red Deer. Stags will groan, blow raspberries, yak yak and whistle during this time. Giving birth after a 220-day gestation between May and July, a single calf is born, rarely twins. Weaned by November, Sika can breed as yearlings, the young stags leaving areas of dense populations first, moving as much as 30 miles away. Sika live is small, single-sex groups of no more than six or seven, coming together in greater numbers only for the rut.

This introduced species is closely related to the Red Deer and will interbreed. A worrying problem, zoologists are concerned for the genetic integrity of the Red, some saying that there are now no more pure reds in mainland Britain. The first generation of a cross has the appearance of both, but descendants following on have the appearance of the dominant parent. This may take the form of a bey tine on a seemingly Sika stag (dominant Sika, Red cross) or a white gland on the back leg of a red, indicating a dominantly Red Deer but with some Sika in its genetic makeup, which makes selective culling impossible. Sika are regarded as pests in some areas and are culled as such. Since 1981 it has been illegal to release them into the wild (Schedule 9, Wildlife and Countryside act).

Antlers are cast from April, oldest animals first, and are fully grown and clean of velvet by August.

Their antlers are of a similar structure to the Red’s but on a smaller scale, with a maximum of eight points. Widely spaced, a feature is the 45º angle between the first point and beam, whereas it would be 90º on a Red stag. Yearlings usually have a single spike, a brow tine develops in the second or possibly the third year with top points in later years, depending on weather and quality of food available. The antlers are used frequently to score bark and toss undergrowth, so the tips become white with use.

Open season for does is 1st November to 31st March in England, Wales and Northern Ireland, the close season covers the run up to birth and dependent calf period, the young being weaned by the opening of the season. Unlike Roe Deer, there is no feeling the season is too long, as Sika are seen as an invasive species. Along with other male deer in the UK, the stag season follows sporting considerations; open season 1st August to 30th April, which allows the antler drop, regrowth and shedding of velvet during summer in peace, but 21st October to 15th Feb in Scotland for does, 1st July to 20th October for stags.

It is well recognised that the Sika are difficult to stalk. An extremely wary species, they quickly become nocturnal if subject to much human disturbance. When shot at, they can leave an area en masse, not returning for long periods. During culling, the advice is to stay hidden after the shot, not to stalk the same areas frequently and to take deer in more isolated parts first on the boundary of their main patch, to avoid disturbing recognised resting up areas.