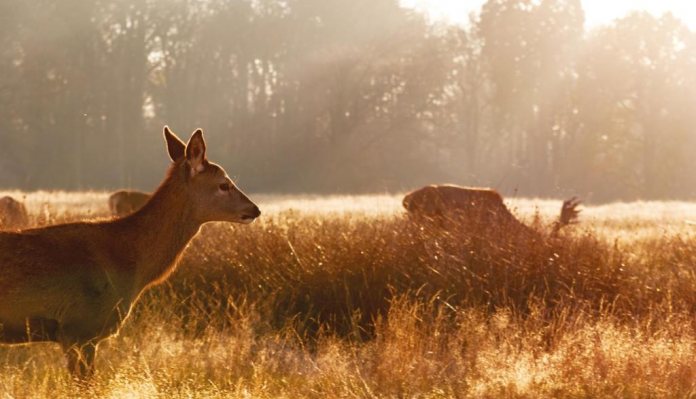 Last month I looked at deer eyesight from the perspective of a research scientist, Dr George Gallagher, Dana Professor of Animal Science at Berry College in Georgia, USA. So, what about their hearing and smell? He called these tough areas of research, due in part to habituation - no response by the animal to a certain smell or sound could mean they have become used to that stimulus and it does not register as a danger. Or do they just not hear or smell that sound or scent?

The best example of this are gas guns. Farmers put them out to scare off the birds feeding on newly planted seeds or crops starting to show through. I’m sure we have all seen deer feeding in these fields, not flinching in the slightest when the loud bangs go off - they have become habituised to the noise. But let off a rifle, also of course a similar loud bang, and they run.
With olfactory, the sense of smell, a similar thing can happen. I started stalking in the 1980s with a professional who would frequently light a roll up while on a stalk. This didn’t seem to have an effect on the deer. Perhaps they didn’t register the tobacco as associated with human danger, but again the conclusion is uncertain!

Tests in the US recorded brainstem responses on 13 sedated deer using different levels and frequencies of sound. Published in a paper in 2007*, relevant excerpts are: ‘Our results suggest that white-tailed deer hear within the range of frequencies we tested, from 0.25 kHz to 30 kHz, with best sensitivity between 4kHz and 8kHz. We found that best hearing sensitivity of deer from 4 kHz to 8 kHz corresponds to the dominant features of their vocalizations. Most [deer] calls were composed of frequencies between 1 kHz and 8 kHz, with the strongest intensities of individual calls between 3 kHz and 6.5 kHz.This overlaps with the range of frequencies which humans hear best, from 2 kHz to 5 kHz (Durrant and Lovrinic 1995). The upper limit of human hearing lies at about 20 kHz (Durrant and Lovrinic 1995), whereas we demonstrated that white-tailed deer detected frequencies to >30 kHz.’

The sound levels required to elicit a response ranged from around 65db (unstrained conversation at 3 - 5 ft) at the lowest and highest frequencies down to around 40db (library background noise) at 4 to 8 kHz. This isn’t brilliant hearing; however, the researchers were looking to gain a response via electrodes placed around the head. ‘It should be noted, however, that behavioral testing may be more sensitive at determining minimum hearing thresholds than auditory brainstem response tests’

The extra hearing range of 20 - 30kHz is of no consequence to us, as deer stalkers. High frequency sounds attenuate rapidly, i.e. don’t travel far and most of those we make, like walking, pushing past vegetation and the clunking of metal on metal are low frequency. Deer grunts and other noises made during the rut are low pitched to carry through the wood and attract females. While higher pitched sounds by fawns don’t gain attention from predators by being heard just locally. The sounds we make to call bucks are also within our hearing range, as opposed to dog whistles for example, which are pitched too high for us.

Where do deer get their reputation for fantastic hearing? They can move their ears independently of each other to best home in on certain sounds. The surface area of the pinnae (outer ear) is much larger than ours too, and all things being equal, these two factors alone make for much better hearing than humans.

But also, we need to remember the woods and fields are the deer’s home. They live there 24/7, and it is usually a quiet place. Sure, the birds sing, trees rustle in the wind and squirrels chase each other about. These are normal everyday sounds. Enter a person and the birds stop singing, pigeons fly off, squirrels are alerted. Our footsteps are heard, as is the brushing past bramble and branches etc. More broadly, cars and tractors usually come and drive by without stopping. However, a stalker makes a lot of noise and these sounds carry, so deer are forewarned of our presence. They do not need super hearing, it is a combination of events in their environment that alerts them. Then specific sounds can be pinpointed with those large, moveable ears.

Professor Gallagher again: “Conventional wisdom suggests humans have poor scent detection capabilities compared to animals. Recent research is actually challenging that notion. We may be much better than assumed. Regardless, we place a lot of emphasis on the ability of deer to detect odors. [Witness that] the number of scent blockers, attractants, and estrus related products on the market is extensive.”

“Claims of just how sensitive are deer are rampant. There are statements that deer are 20x, 100x, 500x and even 1000x more sensitive in odor detection than humans. Laboratory procedures are available that could possibly be modified to count the number of specialized olfactory nerve cells found where they reside on the turbinate bones of the sinus cavity. That would likely be an expensive proposition and, might not actually answer the question. We would assume that more olfactory receptors are better, but it may just be different, similar to vision.”

“At this point, research on odor detection ability in deer is rather limited. It would be a very challenging and an expensive area of research [as] behavioral analysis can be very tricky. For example, in some previous research, we found that deer could readily become habituated and non-responsive to scents intended as a repellent based on predator related and other odors. A novel odor may also elicit a response that a more common compound does not. Those of us spending a lot of time in the field can certainly attest that deer appear to be quite sensitive to different odors, but at this point research in this area is lacking.”
These cautious words attest to Professor Gallagher’s scientific approach. He is unwilling to commit to any speculation or generalisations without a rigorous study, and very few have been carried out. Therefore, we are mainly left to rely on what we can gather from experience.

Where does this leave the deerstalker?

With sound, we need to be as quiet as possible, including the rustling of clothing, which is obvious. Regarding scent, we believe deer have a sensitive olfactory system. What they are sensitive to is open to debate. So, our best way forward is to reduce our own scent, or stop it from reaching deer. We can do this in two ways; firstly, stalking into the wind is paramount. If our scent is taken away from our direction of travel, the deer in front of us are not going to clock us. This is easier said than done! My main stalking wood is some 250 acres in size, with a raised central track running through the middle, the wood slopes down about 30m on either side to fields. Sounds good, but the wind always swirls about in a crazy manner! There can be a stiff westerly breeze on the track, but dip down into the wood and it could be coming from the south east. This blows any hope of an upwind stalk out of the window. I’m sure other stalkers recognise this scenario?

Another course of action is to reduce the scents coming from you. I’m not advocating all the scent blocking and neutralising sprays etc. But there are quite simple steps that can be taken. I wrote last month about UV brighteners in clothing detergents.

Most also contain perfume, which are alien to deer, such that they may find the scent a major flag to danger.

I see M & S sell perfume and UV brightener-free detergents, as does Tesco. This must be a good start. Showering in scent-free body wash and shampoo takes this idea a little further, as does a scent-free deodorant. Should you do more? As always, the proof is in the results. Why not try it and see if it works for you? I have been doing this for some 8 months. I like to believe deer haven’t been noticing me quite so quickly, but as the Professor says, it’s a tough area of research!