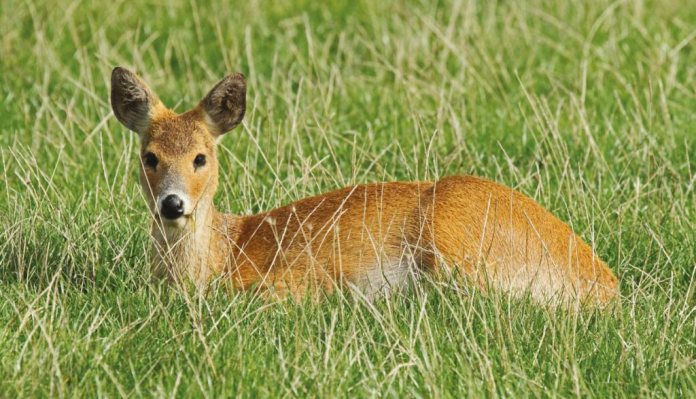 Chinese water deer (CWD) originate from China and Korea, introduced in the late 19th Century by the Duke of Bedford to Woburn Park alongside Muntjac. Releases, both accidental from Whipsnade zoo (around 1929) and deliberate from other various parks makes for a scattered population across the south East of England. Bedfordshire, Cambridgeshire, Suffolk and Norfolk hold most of the UK’s numbers, estimated at 10% of the world’s population of these deer.

In their native countries, the CWD is on the IUCN ‘vulnerable’ list because of loss of habitat and poaching. The population there is said to be declining, but by how much is not reliably ascertainable. The spread of Chinese Water Deer in England may be stunted by competition for habitat from the Muntjac, which have adapted very successful to the UK’s fauna and climate. Calibre-wise, they can be shot with a .224” centrefire such as 223 Remington, with a minimum bullet weight of 50-grains, producing a minimum of 1000 ft/lbs of energy, which is the same as Muntjac.

Preferring wetlands, the fens of Norfolk are indeed an ideal habitat, as are reed beds and river shores, but this species will adapt to drier habitats with a good understorey. Between feeding, these deer will lie up for long periods, ruminating. The deer are small, just a little taller than your average Muntjac at 50 to 55cm at the shoulder but lighter in weight, up to 18kg live, which gives a larder weight of up 10kg or 22lbs with an empty body cavity, head and feet removed at the hocks. With relatively longer legs than Muntjac, they give the appearance of a bigger deer.

CWD feed on grasses, sedge, herbs and woody plants. They do not have top incisor teeth like the Sika, so tear, rather than cut, vegetation. Without antlers, they do not come into conflict with foresters and landowners tree damage wise, or conservationists also, as the low population density is not enough to cause major loss of local fauna; which is in direct contrast to the Muntjac, who do have a bad reputation for decimating bluebell woods etc. and fruit farms.

As noted, the species are lighter but longer legged than Muntjac, an even, light brown in summer, and a little darker dull grey in winter. They can appear to be like a smaller Roe deer. However, there is no lighter caudal patch, and have a short tail the same colour as their body. Side on, the rump is noticeably higher than the shoulder. The ears are large in relation to the head and rounded. Together with black button like eyes, they have a teddy bear like appearance. Bucks do not have antlers, but mature examples will have noticeable tusks. Does also have tusks, but they are not so prominent. These large canine teeth are somewhat movable, pointing more forward from their resting position when facing up to other bucks. Both sexes will give a short bark when alarmed and scream when chased. Bucks will whistle and squeak in the run up to the rut, and ‘whicker’ when chasing other bucks.

The rut is in late November and December! Bucks and does form pairs, defending their territory from other mature males, and staying together until the following April. Bucks parallel walk for dominance, as with other species, only fighting if they are not established. Without antlers, fatalities are rare, but injuries from tusks are common.

Fawns are born after a six to seven month gestation period, in June or July. Up to three fawns are normal, but as many as six have been recorded. A high mortality of some 40% in the first few weeks means that the population does not rapidly rise as may be initially assumed, which might account for the size of the initial litters. Fawns are hidden in cover, emerging only to suckle for the first few days. At other times, CWD live a more solitary life, excepting does with fawns, who, like other females of the species, form small groups only on a good feeding area.

Some time ago, CWD were classified along with Muntjac, as a pest deer species, which essentially means all year-round hunting and no closed or male/ female-only seasons. This was done in the case of the latter to reduce the damage they do to crops and natural flowers etc. However, this has now changed for the Chinese Water Deer that now have a hunting season similar to the main UK species.

Interestingly, the open season for both male and female animals is 1st November to 31st March in England as this species is not found in Scotland, Wales or Northern Ireland. Understandable for the doe, as she may well have dependent fawns before November. As both bucks and does have no antlers, the species does not have the cachet of other species as a sporting quarry, although the tusks in a mounted head are of interest, so a separate season is not deemed necessary. However, their very rarity may work against them, and be seen by some as an animal to bag, due to its unusual features and scarcity, compared to the other major species we hunt in Great Britain.

As numbers are not great, and animals have died out in other areas where they have been introduced, perhaps the introduction of a closed season is to the good. Certainly, Chinese Water Deer are a minor species in the UK sporting and conservation scene, by not causing significant damage or expanding greatly in number.