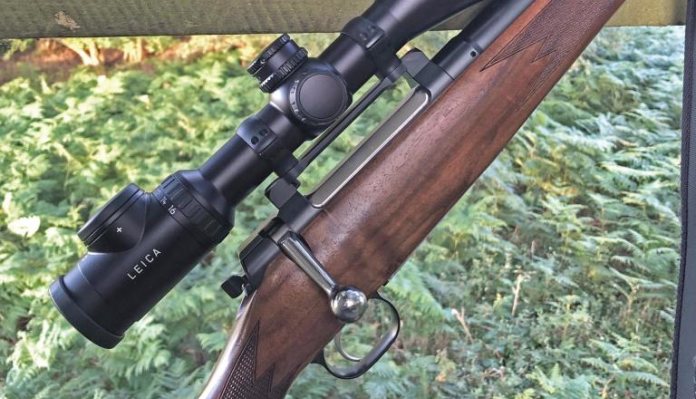 Earlier this year I gave my initial thoughts on Leica’s Geovid 8x42HD-B range finding binoculars and Magnus 2.4 - 16x56i rifle scope I purchased. After using them for the summer and autumn, I’ve now had time to evaluate their capabilities. I upgraded because of a need to shoot closer to dawn and dusk and at somewhat longer distances, as the numerous Fallow on my permissions were becoming very shy. My previous scope had a 44mm objective lens, while the Leica has a larger 56mm front end, which, when both set at 12x magnification gave a 3.66mm exit pupil vs 4.66mm respectively, so a good amount of extra light transmitted! My eyes are into their 6th decade and need all the help they can get, hence the upgrade.

Looking through both instruments, the glass quality is exemplary, as you might reasonably expect from this manufacturer, which has long been lauded for its photographic lenses. The image is clear and cool, as opposed to other brands of scopes and binoculars, which can appear warm in comparison. The sight picture through the scope didn’t tunnel at all, from the 2.4x setting through to 16x, something few other makes can achieve. The binoculars were acquired specifically for their integral rangefinder (LRF) and integrated ballistic programme. When considering a deer in front of me, I always look at it through binos prior to a shot to fully identify it and take note of any unusual features (perhaps it is lame or is salivating, indicating a condition that will be lost when shot). At this point, it takes no time at all to range the animal, job done!

Two small buttons operated by the fingers of the right hand allows the centrally-located LRF to provide distances out to 1800m. Saying that; the furthest I’ve managed to range is 1640m, which is far more than I will ever need; as with all rangefinders, it depends on surface, colour and distance of what you are trying to bounce the beam off to get a reading. The clever part is the ballistic calculator, which converts the distance into bullet drop information in 5mm, 10mm, 1 MOA, 1/3 MOA and 1/4 MOA scope clicks, or holdover in cm or inches, taking into account the specifics of the bullet, temperature and angle from the horizontal.

This works well with most scopes; my old Leopold with 1/4 MOA clicks included, which has given it a new lease of life with long range capability. Information output is easily changed in a few seconds on the binos to give the bullet drop information at the ranged distance. For example, once the ballistic data for my home loaded 130-grain Sciroccos is saved, I can ping the distance, say 350m, and dial in the right number of clicks, 19 up in this case, which is displayed right after the distance. It’s a little fiddly to unscrew the scope turret cap, count the 19 clicks by looking at the top dial, then get in position and shoot, but it works for sure.

Where the Leica scope integrates nicely with the binoculars is in matching the ballistic profile with a corresponding scope elevation ring (12 different ones are supplied with the scope). When the ranged distance is, say, 400m, the rifleman just dials in 40 on the turret, visible while holding the rifle in a shooting position, and takes the shot. It is quick and easy. 320m? No problem; twist the turret to 32 and shoot!

Proof of the pudding

This is fine in theory. If one is target shooting, a miss is no problem, but shooting live quarry is a different matter. Are the rings and ballistic profiles produced by the online calculator accurate? Over the summer, I confess I used the scope as many hunters will recognise, zeroing at 2.5cm (1 inch) high at 100m, knowing the bullet would hit dead on at 145m (with my load), and 5cm (2.5 ins) low at 200m. I did not have to pass up any shots, shooting some fox at 90 to 135m and a number of Fallow and Muntjac between 110 and 185m. I did shoot very close to dusk too, and the view was much brighter at higher magnification than the previous scope, so the theory worked in practice.

The no.4 reticle is, in comparison to other hunting patterns, very fine. I didn’t have any issues close to dark, using the illumination quite effectively, it has a bright ‘day,’ or much dimmer ‘night’ indent, which can be pre-set to a preferred level, which will turn off automatically when tilted for carrying to save the battery. It is very useable, although I would on balance like a somewhat heavier reticle for woodland stalking, so I didn’t have to rely on the illumination. A comparison of types is shown, the Zeiss 60 being a good compromise between being useable in a dim setting and fine enough for accurate shot placement at distance; I also favour the Meopta 4C for the same reasons.

I didn’t have an opportunity to prove the ballistic data until fairly recently, at Orion Firearms Training in Wales. I booked a ‘coaching input’ day as part of a small group of other shooters also wishing to stretch their capabilities with a few friendly pointers along the way. I had uploaded my 165-grain, 308 bullet’s weight, ballistic coefficient (BC) and velocity into Leica’s online calculator. It matched up with my load’s predicted drop with the #5 turret ring, which I installed by undoing 2 small screws on the turret itself. The compatible ballistic profile was also installed in the binocular programme. The difference between my predicted bullet path and the #5 ring varied by less than 1cm up to 350m, and by only 2.12cm at 400m, so pretty accurate (see chart).

Then it was a case of matching up the scope with the various targets out to 730m to see if it was accurate in practice. Targets further out were available but I, didn’t need to shoot that far. Suffice to say that the day was happily spent shooting steel gongs at 100, 200, 255, 330, 400 and 550m, the turret markings matched the distance of the targets, doing so accurately when changing from one to another and back to 100m at the end of the day.

I didn’t have ballistic information for 730m, so John O’Brien, our instructor, took a look and we wound the elevation adjustment within 5 clicks of maximum, which put me on target. Having to allow quite a bit for wind, I hit a smaller 20” plate at the same distance on the 3rd shot, which was very pleasing to hear the strike on the gong come back from that distance. It also demonstrated the extent of vertical adjustment I had with one turn of the turret.

The scope had cost some £1900, the binoculars £1700, so for me £190 for the day at the range was a small price to pay to prove the data they provided. In future, I will confidently shoot longer distances, knowing the scope will accurately adjust and just as importantly return to the 100m zero afterwards. This is not to say I’ll be regularly shooting Fallow at 500m! I will be sticking to my 300m maximum, given ideal conditions, as before. However, if I should be unlucky and wound a deer, I may be in a position to finish the job if it were in the open at range, something I would hope never to use, but the ability to do so is a definite asset!

At a normal stalking range of, say, 100m the wind has little effect, perhaps 1 cm or so, but at 730m we were aiming off 240cm, (almost 8 ft) with a 15mph, 3 or 9 O’clock wind, described as just a moderate breeze on the Beaufort scale. How often do we shoot in stronger winds? The mechanics of bullet drop can be predicted and repeated, but the wind is a big variable, which can confound the shooter. The takeaway being that confidence in long range shooting using the scope’s bullet drop turret should be tempered with knowledge of local wind conditions. That far off Fallow doe may be shootable when correctly dialed in for distance, but a miss (or worse, a bad hit) is entirely possible if the wind has been misjudged even slightly.

I am very happy with the binoculars and scope set up. The optics are excellent, being bright, crystal clear and accurate. Having proved the graduations on the scope’s elevation ring that matched my rifle’s load, longer shots are simply and accurately dialed in when ranged by the binoculars, aiding long range shooting as I had hoped.