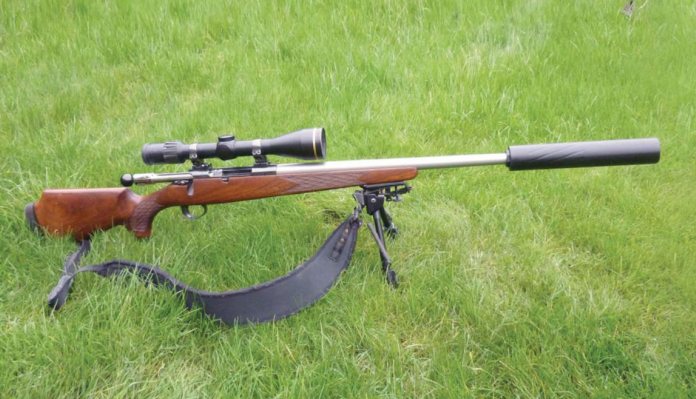 Back in 1996, I was looking for a new rifle; I had a Sako Stuzen in .308 at the time, which would shoot 1.5” high over zero for the first shot or two after cleaning, then at my chosen zero thereafter, which irritated me. So, over the bridge to Litts (as it was then; now The Sportsman Gun Centre), where I alighted on a Varberger in 6.5x55 Swedish Mauser. I am always drawn to a left field option, given a choice, and Varberger was certainly not mainstream, although the action is well respected by gunsmiths. It’s not pretty either, best described as functional, but it seemed so different from the racks of Tikkas, Winchesters, Remington’s and BSAs etc. available back then, I bought it!

The calibre wasn’t as popular as it is now, but having worked in Sweden and Norway, I knew they loved it there and must have done so for a reason. Jointly designed in the 1890s by both countries, it sits half way between a .243 and a .308 in useable bullet weight, as 120 to 140-grain projectiles does well for stalking, and recoil is mild. Perfect for UK deer, it’s naturally accurate too; I’m surprised we as a nation didn’t cotton on to it sooner!

Shortly afterwards, I had a moderator fitted. In the mid 1990s, designs were still in their infancy, as it was long and heavy compared to today’s offerings. I remember writing to the landowner of my stalking permission at the time, asking if it was OK for me to use it on his land. How times have changed! All was well for about 10 years. I had been used to getting ½” groups all day every day from the standard match cut rifled barrel, but accuracy dropped off. My fault, hands up, I had not always removed the moderator after shooting, which had resulted in gasses eroding the barrel crown. So, off it went to Riflecraft who, after discussing options on the phone, quickly and efficiently put on a stainless Border match barrel of medium weight, and I was back to ½” groups again in no time at all.

Another 9 years passed uneventfully, but then I started having accuracy problems again. With my standard hunting load of Hodgdon H4350 and 130-grain Swift Sirocco’s giving me a flat shooting 2825 fps, I could not seem to get better than 1 ½” groups. This would suffice for woodland deer stalking of course, but having had laser like accuracy all this time, something was amiss, and I lost confidence in the Varberger; using my Mauser M03 exclusively instead this last year, while I tried to figure out what had happened.

It can take quite a while to suss out what’s wrong with a rifle. I don’t like to shoot targets over my stalking ground, as it disturbs the deer, as well as the noise pollution for the local inhabitants, of course. Luckily, going to the friendly Severnside club just over the Severn bridge near Magor isn’t too far. There I can shoot at 100 yards and later in the day at 200 up to three times a week, while chatting to a wide variety of gun owners using vintage and modern stalking rifles. However, in one outing there is a limit to what you can achieve without rushing it and getting inaccurate results. Then you must factor in work days, wet days, windy days and wife pleasing days, which annoyingly impinge on the obviously more important task of sorting out the rifle.

I went through the gun in the prescribed methodical manner, to eliminate each component individually as causing the lost accuracy. I shot with and without the moderator, tried another scope, removed and reset the mounts, scrubbed the barrel and throat, used different commercial ammunition as well as home loads, all to no avail. I had a top gunsmith borescope the barrel and check the crown, no problems there, and the barrel was not touching the woodwork at all while on a bipod at the range. Perhaps it was my shooting? But as I was getting sub-1” groups from my Mauser, probably not!

The last chance was bedding. The rifle was not pillar bedded; there was no need for this previously, as I had been getting all the accuracy I wanted. I discussed this with Derek Clifford, who has much experience in this department, sub-contracting in bedding work from many gunsmiths. The Varberger has a somewhat unusual 3-point fixing, two screws through the trigger guard and one a little further forward in front of the magazine. Derek machined out the wood surrounding the three screws and fitted aluminum pillars.

The recoil lug was removed and reset accurately in compound. Wood was also removed at the base of the action and at the first inch or so of barrel. Then filled with bedding compound, the action coated with release agent and refitted. When the compound had completely set after a week, the action was removed and cleaned, the compound in the stock machined back where necessary. The action then was refitted; however, it now sits very snugly and immovably on metal and resin, hidden by the wooden stock.

With some trepidation, I went to the range. This was the last thing I could do, accuracy-wise. The Varberger had served me well for almost 20 years, and had accounted for over 2000 deer in that time, so understandably I had become fond of it, despite it not being a looker. Luckily, the bedding work paid off. With my standard load I was back to better than ½”, my best being 3/8” off a bipod and rear bag, so I was very happy. The action screws now nip up tight, metal on metal in a way that is very reassuring.

Previously, with the wood and washers, it was all a bit spongy.

Why accuracy had gone off after so long as a tack driver was a mystery, as nothing seemed amiss visually, but the proof is in the pudding and all is well. This rifle should now be good for another 20 years and there is no reason to think it won’t see out my stalking days. I have been out after fallow bucks this August across the stubble with it with renewed confidence, accounting for five and two muntjac so far, all taken with the former laser like accuracy I was used to. Happy days!