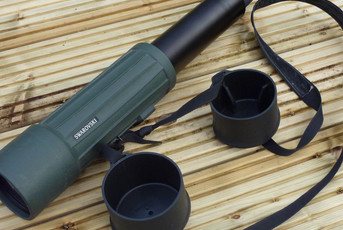 This month I want to have a look at specialist gear. In all honesty much of the kit I’m referring to is becoming more main stream as availability increases and prices get more affordable. So more specifically let’s consider equipment other than the essential - bullets, binoculars, rifle and knife.

Many lowland stalkers may not have considered the use of a draw scope/spotting scope. Though far more common in the highlands, there is a good reason they are still in use, bottom line they are useful! Going back a few years now I had a look at a collection of scopes and ended up buying a Swarovski CTC 30 X 75 draw scope and must say I haven’t looked back. Two primary duties have evolved from having this tool at my disposal. Firstly It comes with me in the car so I can look at my ground from certain vantage points without the need to get marching, giving me more oversight as I’m going ‘too and fro’ with other duties. If you are lucky enough to cover a fair amount of ground this offers significant advantages over binoculars. More specifically it really excels when assessing animals from distance. Without the need to be close enough to spook the deer you can often pick over the animal visually as if you were standing next to it, turning a fleeting glance up close into a detailed appraisal without the potential upset and commitment of an approach followed by an egress.

Laser Range Finder
Ohh yes ! Nothing divides like a laser range finder. I say this because I was and still am a ‘dyed in the wool’ ‘field craft is king’ man but then started to think about it. Do I use a scope, and why? Because it allows me to make more accurate shots than would be possible with iron sights even within sensible ranges. Does the range finder help me make more accurate shots? Yes! Knowing how far something is, along with the bullet trajectory relative to line of sight, goes to further aid shot placement.

More importantly at the upper end of your acceptable shooting range when the distance appraisal is at both its most critical and difficult it gives you a definitive NO shooting point. Many would argue that most common calibres will shoot flat to 200 yards, and I would hope that anyone out there shooting should be able to make a close enough guess at 100yards to not be the wrong side of 200yards! However, since using my laser range finder my estimation of distance has got MUCH better.

Secondly on the ground where I shoot regularly I have logged frequent shooting positions and the distances to fixed objects, so without the finder I have good yardage approximations of potential shots. Thirdly, and most reassuringly when visiting new ground as a guest or solving a deer problem on call, the range finder gives me the confidence to do a good job even if it confirms my best guess. In shooting being confident and relaxed gives you the greatest probability of making the right decision whether the shot should be taken or not, and if the shot is taken, the best chance of delivering the bullet on target.

Bipods have been around a long time but primarily in a military environment. The relatively recent push with tactical-type rifles in longer range hunting has made it common place in particular with the advent of more US-style varminting. However I think the pivotal change came about when someone in the Harris engineering works decided to attach their bipod to the ubiquitous sling swivel stud. Here was not only a great sturdy product that by comparison was light, you could now take it on and off your rifle without special tools or dedicated fixtures.

As far as choice I use a short bench model for my long range 243win. It is almost uniquely used off of a platform on the top of my 4x4. Precision is all about consistency and where there is a good solid place to site the feet of the pod it works well, however depending on the stiffness of the rifles forend you can get mixed results. Another Issue is point of impact (POI) shift between using the pod or not. Some setups don’t shift the POI but more often than not you’ll have to choose to always use the pod (legs extended or folded) or not at all. I have the longest Harris bipod that is produced and it enables a great accuracy in the sitting position, however you’re in the realms of a heavy cumbersome addition to your rifle. It was in looking for an alternative to this long pod that I came to another stability solution, Sticks.

One, two, three, four or even five sticks have been used in combination to provide what is in the main a standing/sitting/kneeling firing position. Many of us find any of these three options more comfortable than lying prone, particularly if you are in position for some time. I wanted a good steady shooting position for standing in woodland and even more so sitting waiting for foxes.
To this end I settled on a light weight, adjustable, aluminium set in a tripod configuration, allowing me to adjust to the terrain and shoot steadily out to significant ranges. One important point is that I had to cover them in cloth camo tape to stop them clattering together and to take the shine off when placing them for a shot.

Got The Pod, What About The Mod!

Moderators are here to stay. They perform three important tasks, protecting your hearing, reducing environmental disturbance and stabilising the rifle under recoil. I have used several reflex (over barrel/telescopic types) and also muzzle -mounted cans. My simple criteria for a full bore moderator arising from my own experience is; make it as small as possible, weld it together and mount it on the muzzle. If the moderator is effectively one piece nothing will rattle and reduce accuracy and consistency.

Which brings me to the muzzle mounting, while reflex designs give more volume for less overall length nearly all of them use a bushing system on the barrel. When you contact the barrel in two places you interfere with its harmonic resonance. Unless it is mounted and torqued to the same degree each time it is used there is the potential for inconsistency/ inaccuracy, also over time the bushing will abrade the finish on the barrel. Also and like a bipod your point of impact will change if the can is fitted or not. Generally if zeroed with it on, the POI will be higher with it off! These are only my opinions formed from trial and error, in general most moderators will do a reasonable job and as a rule the more you pay the more compact and efficient they get.

Once upon a time I went to buy a quad… and came back with a Suzuki Jimny! Well it had a heater, a roof, a radio and can be driven on the motorway, I was sold! In truth the reputation of the Jimny’s predecessor the SJ series was quite well known, but this model has rewritten the rule book. It will hold two fallow bucks in the back with the seats flat and go almost anywhere due to a high/low ratio four/two wheel drive gearbox, but most critically it weighs next to nothing!

No this is not an add for Suzuki and no you don’t need a 4-wheel drive for hunting, but they do help if you do a lot of it. Getting to far off places on your shoot quickly, carrying lots of extra gear and perhaps most importantly carrying out the carcasses and getting them to the game dealer. Plus the comfort on a cold dark nights foxing. With the recent amendments to the Law regarding deer I now use the car as a mobile high seat. Drive in park up with the engine off and hop up on top. The car is specialist gear when this dedicated to the task, but it should be considered as a valuable tool on the deer mans gear list to whatever degree.

You may have come across something like a soft bucket with handles in the local DIY store. Often called trugs and used by builders for cement mixes. The largest of them make excellent deer carriers for Roe and Muntjac. They can be grabbed handles together and heaved into the car while containing any mess. Call it a ‘tactical bucket’ if it makes you feel better wandering around B&Q with the family, all the while dreaming of sitting in a wood, rifle in hand…...

In all of this remember the gear is only part of the story, technique and field craft should still rate well above the kit in importance.