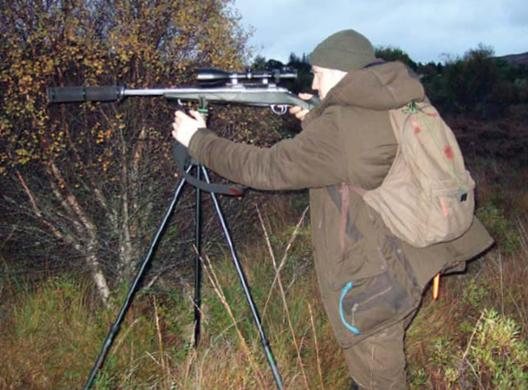 I like the idea of passing my knowledge and skills on, so every year I introduce a newcomer to the art of stalking and outdoor pursuits in general. This year, none more deserving than Andrew, after hearing of the brick wall he came up against trying to get into stalking. Easy you might say, just pay a fee, book a day and off you go. But when you ask for a little more than just pulling the trigger (knowledge), then it seems no one has the time and there’s no substitute for experience. You can read all the books and go on as many courses as you want, but you still won’t have the experience that makes you a stalker.

I do on rare occasions take guests out, though I don’t make my living out of stalking and I appreciate there’s not many in the same position as me! But here is someone trying to go about things the right way, willing to help in any way he can, high seats, fencing, whatever it takes to help make him a stalker. What’s more, he’s willing to pay. Now he is with me, we will see how those extra pair of hands work out now that the doe and hind season is upon us. As I said, I do on rare occasions take out a paying guest, though my terms are quite different; if agreed, and I think we can get on, then my terms are £50 per outing and no trophy fee.

The client must take any deer species that shows and is in season! Carcasses may be bought at the going rate and any loss of venison paid for, those are the ground rules. Though as in the case of my latest guest, Miles, things tended to work out a lot better. If I am taking deer off the ground and I can carry out a little maintenance while there, I am happy for someone to try their luck on the stalking, although I can’t allow them to roam freely unaccompanied, unless it’s on the low ground where it’s easier going for health and safety reasons.

Our extended weekend got off to a good start, we made our way to a vantage point overlooking a boggy low moor surrounded by a wooded hillside and didn’t have to wait long before a spikier showed. Miles’ 270 sent it crashing through the dense bracken before dropping 50 yards on, his first ever sika and a good one for the freezer! As soon as we had the carcass dressed out and hung in the chillier, we tried to get some sleep, ready for the long climb to the high ground the following morning.

We started our climb while it was still dark with the help of our head torches to get to the top just after daybreak. All went well, but no sign of a deer, so made our descent planning our next stalk as we did so. After breakfast, I suggested he should stalk the low ground through the wood, while I cleared some bracken. He was soon on his way with a radio in his pocket and the help of the land owner who took him part way, then left him to go it alone after some clear instructions.

Four hours later, a very excited Miles came over the radio: “I got one, I got a stag, it’s bloody huge!” Just in time, as I was getting knackered cutting bracken. We met up and drove down to where he had left the stag, a nice eight pointer. After a well-earned coffee, we headed off to the chiller and as this one was going to be mounted we took the cape off and put it straight in the freezer before heading off to another estate. Here, he bagged his third Sika, a well grown calf; as this is a plantation, the deer are a real pest, so must be hit hard! We saw five or six hinds break cover from a small wood, each stopping in turn to survey the surrounding area before leaving the security of the mature trees and disappearing into the plantation. A good place for Miles to watch over the following morning, while I stalked the 40-acre wood, hopefully pushing deer out his way.

On the ground at day break but saw nothing shootable, until I had pushed a large stag out of thick cover, which had turned back unseen by me. As this was our last day, we had to try again that evening in the high seats, as trying to stalk this ground in the evening would never work! But apart from watching the stag in the far distance with some hinds and accounting for another good-sized calf, we left. On our return to our caravan, we began packing up and loading the car ready for an early departure in the morning.

But we had to give it one last try of getting the trophy Miles had travelled all the way for. We now knew the area, so tried a different approach! Miles, who spotted the stag first, standing facing away from us, instructing him to take him in the back of the neck before it disappeared into cover, a rather shaky rifle came up on the sticks, steadied and shot. Watching the stag through my binoculars, all four legs crumpled under its weight, I could not have taken the shot any better! So, impressed, not only with his accuracy but his general attitude to stalking, I give him an open invitation to accompany me with my cull next time.