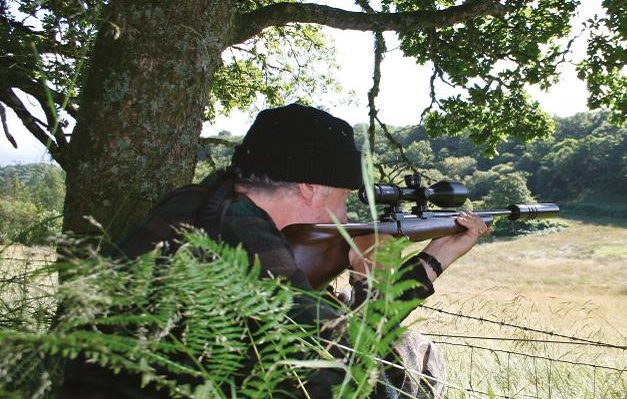 Whereas I really like the remote and incredibly beautiful scenic Sutherland, there are times when the horizontal rain and long strenuous stalks over leg-sapping bogs and steep terrain gets a bit much! Compare this to the woodland stalking; the going is a bit easier but it can be just as demanding in my view.

Stags on the hill can usually be spotted as a group or individuals, which at least takes the guesswork out of not knowing if they are there, which is the case in dense woodland. With woodland stag stalking it’s more like Roe, dense foliage obscures vision and so slow, steady progress is the order of the day, so as not to ‘bump’ into the quarry. The dice are fully loaded in the deer’s favour, which I personally like, it evens it all up a bit.

In Argyll, where my folks live on the coastal shore line, the mountains break down to smaller rolling hills with ridges radiating out like fingers from a hand. These are densely forested with either new timber stands of commercial forestry; or better still old native woodland and birch trees intermingled with scrub and bracken. Depending on the wind direction, the deer, both red and roe use the tops, or alternate sides to these ridges to bed down during the day and then forage out of sight at dawn or dusk.

Under these conditions, the stalking is extremely tough going, especially early in the season for red when the foliage and undergrowth is thick and the midges and ticks blood hungry! Despite this, early morning first light stalks can be really exciting, as you never really know where the deer are and the chance of a close up encounter is ever present, although dragging out a stag can be very hard work.

Like my reloading, I am very nerdy about checking records of deer movements and wind directions and food source availability. In this, you build up a useful mental picture of what tactics might be successful this time.

I sometimes cheat and tie small pieces of surveyor’s tape to fence posts or tree limbs and then observe them from a distance to see the subtle differences and eddies that the wind makes around the woods. I always travel light, stripped down to the bare minimum, as the stalking often means crawling, bending through deer tracks and over fallen trees, so quite often you have to freeze on one leg or in a contorted position and travelling light really helps stop you wobbling with those deer eyes on you.

Camouflage clothing can be beneficial for concealment but I still like the wool outer garment such as Bison Bush Craft shirts or older Swanndris, as this approach ensures zero noise and stealth in any body movement and they are warm and highly weather resistant. Footwear again needs to be quiet, so soft formed soles are beneficial and gloves are a necessity to conceal those moving hands, hard soles tend to slip on granite outcrops though.

Midge-wise, I use Expedition Midge spray from Bushwear that works very well for me and I generously spray my woolly hat that acts like a wick as you stalk! Choice of binos can be critical, as a wide field of field with a lower power setting is more beneficial but light gathering is still important to distinguish deer from branches! I love the Kahles Compacts but test quite a few, so lightness and good light gathering are important.

The red stags up here are still in velvet around the start of August and a bit later than normal this year but it’s a good time to thin out the youngsters prior to the start of rut. In October they have finished and the leaves are starting to make your approach tricky, as they can see you before you see them and it’s like walking on Rice Krispies.

But it’s not as simple as that because Roe still have territories around these woodlands also, so when stalking stags, single or group, you really have to be careful not to spook a Roe that will give the game away!

Ironically, this is exactly what happened, so however good you think you are with years of experience, you cannot assume anything about deer, they know their ground better than you ever will.

I had noticed that stags were coming down off the ridges at dusk and milling around the interlinked fields and then disappearing back to cover before daybreak, too dark to shoot. I had two choices, sneak into the woods to check out where they bedded but risk disturbing them, or wait between field and woods and hope that I have enough legal light to shoot?

I opted for the first option, where I had to stalk very gingerly into the woodland, avoiding disturbing any feeding stags, roe and other wild life in almost darkness and without stepping on anything; great! If I could position myself in the wood as much downwind as possible, or at least have a sightline to safely shoot without the risk of hitting the foliage, I would be happy.

A night of rain is always beneficial, as it softens the dry leaves under foot and deer are always more apt to move just after a rainstorm. With woodland stalking, it’s all about observation over walking, interspersed with a lot of slow peering through branches and down emerging new sight lines at all angles and heights. It’s so tempting to rush, but don’t, otherwise that early wakeup will be wasted; patience is a virtue!

With the rain drops still lazily dripping off the overhanging leaves and the dawn still onehour away, I slipped slowly down into the drainage gully and worked my way yard by yard to the woods, head below field level, perfect. All I had to do was get to the safety of the wood canopy some 150-yards off but life is never that easy! At 100-yards I came head to head with a Roe doe feeding her way back to the wood ahead of me, rats! I had to let her pass but time was now marching on and the light strengthening at every footstep. I then noticed a stag bedded down but too obscured by bracken, just where I wanted to enter the wood. Right, abort, too risky, I now had to backtrack and regroup. That’s stalking sometimes; the best laid plans and all that! If I still worked the wind there was a larger gulley beyond the second wood, where I could stalk into the wind and often I would find deer feeding here a little later in the morning, as they felt safer.

As the sunlight started to strengthen, several Jays squawked their alarm but no barking from the Roe, so I should be okay until I reached an elevated section of the trail that looked over the gulley for a clear stretch of 150-yards. Viewing through the Bushnell laser range-finding binoculars I had on test, the birch had grown more than I first thought and cover was thick, interspersed with granite outcrops and a 60-foot rocky side to ‘funnel’ the deer through this area, lovely.

I spotted a slight movement 70-yards ahead, an ear flick from behind the birch and a roe buck was browsing between the undergrowth on the lush foliage. I swapped binoculars for rifle and bought the Tikka .308 to the shoulder. The Zeiss 3-12x56mm HT scope literally bought the roe popping into view from its position but the wind was now shifting. Now an eight-point stag had revealed itself and my involuntary movement must have spooked him, as the roebuck bounded up the gully side and was gone, barking in total disgust. He made the right decision; the stag was indecisive and decided to trot off right, which meant he would have to pass across a 150-yards wide field before entering the safety of the wood.

Nestled with my back against a tree, I was shaded and looking directly over the field but with a 200-yard shot, Success, a nice fine eating eight-point stag, cleanly taken after a bit of re-thinking no problems; the Zeiss HT was fitted with the new ASV trajectory compensating turrets, so I could dial in the range and aim dead on. I was hoping that like many deer, sometimes they would stop and look back at the wood before entering, giving me a chance at a shot.

Crunch from wood, there he was just coming at speed across the field. He had two choices of entry points to the distant cover, so I trained the Tikka on these areas and prayed the stag stopped at the low fence.

The stag did not stop and leapt skyward and over, but on the other side he stopped and looked back in clear view- big mistake! The .308 Win Geco 170-grain bullet sped on its way and thankfully dropped him on the spot; hit hard, he rolled over, legs in the air and that was that, venison tonight.

I love woodland stalking stags, as it can be very exciting if a little hard work but I like that, as it requires total concentration and of course luck. The real trick is not rocket science; it’s all about planning and observation and taking the time to think logically about how the deer will behave, not you, and alter your tactics accordingly.