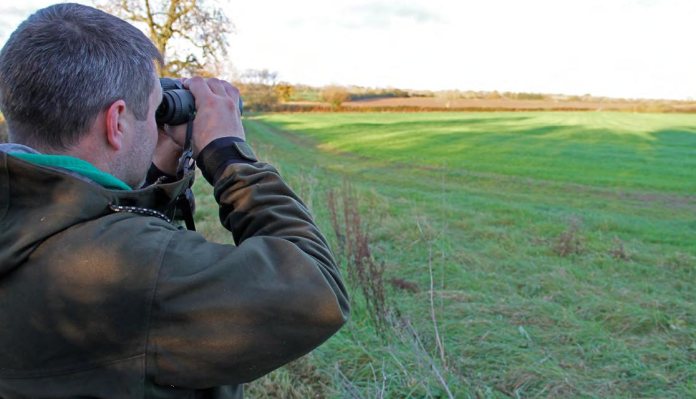 Deer wise, I am Roe deer guy through and through, but when a call came to help shoot some Chinese Water Deer (CWD) in Buckinghamshire, I jumped at the chance. For me, it’s always a good chance to learn more about a non-native species and introduce my son Jake to the thrills of stalking. So, I took him along to observe, track, photograph and gralloch for me! Also, its handy having a young back to drag back the spoils too!

It’s also a good time to try out some new rifles and calibres on a deer species that’s similar in size to a Roe but can be shot with a .22 centrefire legally. Also, cartridges such as the 300 AAC Blackout really interest me, as they are all you need as a small species deer, as is my faithful 6mm PPC Dave Tooley rifle.

I had already been out with my friend Charlie Harriman out for CWD early in the session that had resulted in a young buck and ancient old bugger. Now, a month and a half later, we were after does in the rut and any straggling bucks. Charlie has some superb CWD land and his paying clients pay top dollar for monster bucks, and having been out with him, I can see why.

The farm we where stalking was part arable, part sheep graze and part mud! It backed onto a very prestigious golf course, which was a haven for the CWD and Muntjac. They seek shelter there during the day in the undisturbed woods, apart from stray balls, and emerge at last light to enter Charlie’s fields. He rotates his ground, so that the deer are not over pressured and don’t get gun or human shy. It’s all a matter of proper deer management, to keep a healthy yet productive population that keeps the farmer and stalkers happy, with reduced crop damage and good animals to shoot.

The grounds were pretty remote, with really large 50 acre fields almost like East Anglia and flat but with sudden rises and headlands and each field dissected with deep, five foot ditches for drainage. These are flanked by thick hedges that afford good cover for the CWD, who elect to stay of the fields all day and not venture to the comfort of the 19th hole.

I like this type of stalking, as it is totally different from anything I’m use to. Long shots are fine, but for deer I like to get in close and enjoy the hunt. The PPC is capable way out there, but the 300 Blackout is loopier in its trajectory, so a traditional stalk is advisable.

The weather had been a mixture of unseasonably warm, followed by cold snaps. This is fine but it makes patterning the deer movements more difficult! As you are never sure if they are holding fast and waiting for the warmth to emerge and feed. Conversely, they have fed late evening and over-night before the cold snap starts and therefore hold fast the next morning and just watch you trudge around the muddy fields. That’s where field craft and local knowledge on the ground comes in.

I had my trusty 6mm PPC, its just one of those rifles that has always shot well and continues to do so. Its lack of recoil, intrinsic accuracy along with the superb MAE 32mm stainless steel moddy make it my go too CWD gun. It shoots a 65-grain V-MAX bullet. I also have a Ruger Ranch rifle; small and light, it’s ideally suited to walking/stalking in 300 Blackout.

Scope choice I find is in the mid to larger power range scope but still retaining very good low light abilities. The 6mm PPC still wears the Nightforce NXS 3.5-15x 56mm scope it came with and continues to amaze in its ability. Low light ability, though not as good as a German brand, is still good enough, helped by the illuminated reticle.

The Ruger Ranch had a Leupold VX3 3.5-10x 42mm that suited nicely, as we shall see. Ammunition choice with this was easy, although I favour reloading; Hornady’s factory 110-grain V-MAX load is superb! I gave 2342 fps/1340 ft/lbs. That’s small species deer legal and best of all the accuracy, even from that short 16” barrel, was less than half minute. I can’t reload better than that!

The CWD are a small deer, some 20-23” high and weighing anything from 10-18 kg dependent on sex, age and food available to them. They are thin skinned and a light reasonably fast bullet with a flat trajectory is handy on those long fields. Here a short penetration and instant expansion to dump all the energy within the chest cavity is advantageous for an instant kill! On a CWD, as with Muntjac, unless you are confident to take a neck shot, then a heart/lung shot is advisable. Again, as with Munty, go straight up or a bit forward from the front leg to drop them, as I don’t want them running and hiding!

Up earlier and out

Over the years, I have found CWD are best stalked in the evening. I find almost on the button they will suddenly emerge 30 minutes before last light. Knowing this, one can either stalk in to a high point, where available and sit and wait to see what emerges, or walk/ stalk slowly in along the hedgerow.

In December, the last light is 4.00pm, so you’d better get out early, and start off at 2.00 pm to get into position. Sit wait and observe, never be in a hurry with CWD, as they are there. They differ from Roe, who tend to emerge one at a time and unpredictably. But with CWD, as soon as that last light i.e. sun down off the horizon occurs, they suddenly all appear from almost nowhere.

Today we snuck in to a position on a small raise that over looked a long 5 acre field and then bisected into larger 10 acre fields. From here, we could sight, range and assess each animal as they emerged. First up were a couple of crackers, if you can see the canines at 200 yards, they are big! Leave those for the paying clients, a couple of does but no following bucks despite the late December rut period. At 20 minutes before sun down, it started to happen. A small CWD buck just lifted off the rape field in front of us at 320 yards, using a laser rangefinder. A quick check over and discussion with Charlie, and we agreed this was one to take; simultaneously, we covered binoculars, popped up the Butler Creek scope covers and applied the safeties and were crawling into the hot zone.

Those fields are flat; so no excuses for creating a silhouette against the sky line, so a half crawl and bend over stalk against those high hedgerows kept us unsighted. Jake managed to photograph a doe that sprung up from the warmer side of the hedgerow but did not disturb our buck. At 200 yards we all reduced to a crawl and inch our way forward, half in the drainage ditch and half out. Despite being almost in plain view, the CWD have pretty poor eyesight and so, unlike roe, you can make a few mistakes. However, their hearing and smell is not impaired and when we stopped at 145 yards the buck’s head was up and he knew something was wrong. The Harris bipod was deployed and the 6mm PPC laid flat on the swivel mounting. The magnification was set at 10x and no need for the illuminated reticle. So, with the R2 ladder reticle’s cross hair lined up on the buck’s upper heart, the Jewell trigger broke at less than 1 lb and that V-MAX struck home, instantly dropping him on the spot. No drama, no mess; just straight down.

Two fields on and the Ruger Ranch was brought into play, as a rut-hassled buck was looking the worst for wear at 175 yards. The 110-grain V-MAX Blackout Hornady cartridge was loaded and safety applied and I crawled through the quagmire until we intercepted him at 75 yards or less. Fitted with an MAE Compact, the report was so quiet that the meat shot was the loudest part of this scenario. Two in the bag and the light was fading fast, so Jake stood in for the pictures and gralloch, good lad and then back home for a haggis supper.