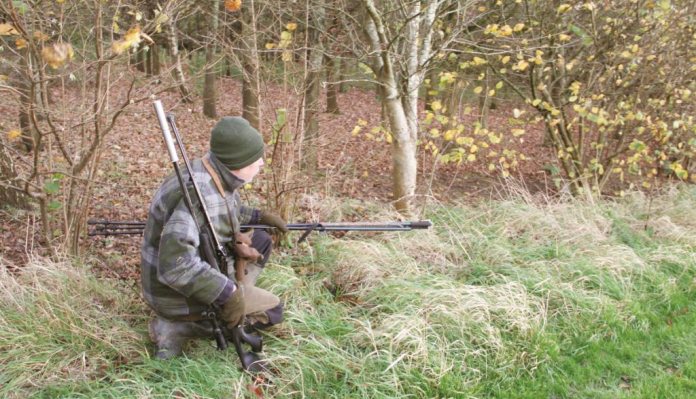 Getting enough Roe does is always a hard proposition to keep the land owner happy and likewise keeping your stalking rights. Everyone likes to stalk Roe bucks, primarily due to the antlers as trophies and the milder climes in which they are hunted. Doe stalking in the winter months is less appealing, due to no trophy and wet/colder weather but it is the most essential part of your Roe stalking calendar.

Cull to be kind

Skip the correct cull plan and you seriously endanger future generations of deer, and that includes your beloved Bucks. So, best get off that sofa and head to the woods, but make a plan and spend as much time observing as you would shooting. I learnt all I knew about Roe by stalking with my late friend Pete McEwan and also photographing them, which involves endless hours just sitting and waiting and looking, you learn so much more without talking a shot.

So, when November first hits, I have already taken account of the does on my land as best I can and conjure up a battle plan for the season. This year has been a bit tricky due to warm early weather, followed by snow and then torrential rain. It’s made assessing where the females are a bit harder, although the lack of leaf on the trees really helps with observation.

At this time of year, at the end of the doe season, i.e. late Feb/early March, it becomes easier to differentiate between the bucks and does. That’s because Roe bucks cast their antlers at the end of Oct/Nov, dependent on age i.e. older first and younger last, so they regrow them over the winter months. So, as can be imagined, it can be tricky to assess if a buck with cast antlers is in fact not a doe.

That’s why having the leaf off the trees really helps in observing the beasts and that’s the key objective early on in the season. Shoot the wrong deer and you could have shot a trophy buck by mistake and ruined your blood line coming to next year’s rut!

Take your time, it’s all too easy to shoot the first deer you see as they emerge from the woods or fields, especially if you have been waiting in the cold and rain for hours. Slow it down, if you are down wind and well concealed at a reasonable distance then it is unlikely a deer will see you. At first when they emerge, yes, they are all ears rotating, to pick up any unfamiliar sounds and the nose is for ever scanning the breeze for alien smells. Their eye sight is poor, but detection of movement is easily spotted, so slow down.

The advantage of letting the first and it may be the only deer to come out unmolested, is that if they are allowed to start feeding on a crop of rape for instance, at this time of year it acts as a confidence decoy. With a happy feeding animal in the field, it will hopefully entice out more, like-minded hungry deer, thinking the area is devoid of humans. In this way, you can make accurate observations of numbers and sex ratios on animals that in the other parts of the year are completely hidden or unseen.

On larger crop fields, it’s amazing what one animal, head down feeding will bring out behind it, shoot that adventurous one first and you will never know what else there is! Often, a group of deer will pop out a few hundred yards further on and then another or even a few solitary animals. It is at this time of year that Roe will be seen together in family groups and not as solitary animals, i.e. bucks, as the territorial instinct has waned until late March and April, when they will want to rub off the velvet from their mature antlers and establish territories once again.

With groups of deer, you can then determine better the correct beast to add to your cull plan, otherwise you are just shooting random animals to meet and fill a quota. With deer out on crops, you have time to see if the does are pregnant, have dependents and if so now many and are there any single females, possibly barren from last year. These would then become your number one priority. Also, you have time to look to see antler growth on the bucks; by late Feb the older males will be nearly fully grown but still in velvet and younger ones still growing fast, so some age difference can be observed now.

I use a lot of differing rifles and calibre for Roe, dependent on what I am testing or some weird wildcat that has taken my fancy. But as they say, dead is dead, and any accurate, large deer-legal and reliable rifle will suffice. In Scotland, where a small a calibre centre fire is Roe-legal, I love the .222 or .223 Remington, although I have used .22-250s and .220 Swifts. But I like the low recoil and noise when a moddy is fitted to a 222 or 223 for observing the bullet strike. However, .243, 6.5mm, 7mm and .30 cals are the mainstay, but I still like the old 6mm PPC, as it allows me to have a rifle capable of deer and yet is also safe to use for fox/vermin if necessary.

My Dave Tooley, McMillan, 6mm PPC rifle is now 18 years old and dubbed the ‘plague rifle’ by the Scotland rangers at the time and is still a grim reaper for roe. In truth, it’s a bit long with a moddy fitted but it still puts bullet on bullet at 100 yards and stupidly small groups at longer ranges, so you have the confidence to take the shot. It also causes less venison damage than a lot of other bigger calibres, it recoils less, is quiet and very easy/economical to reload for!

The other day, I was ‘hunting the brambles’, my favourite technique for stalking Roe does. We had had unbelievable rain down on the Surrey hills where I was stalking and despite the chalk down land topography and good drainage, everywhere was water logged. But it did have the advantage of silent stalking, no cracking of twigs as you progressed, although a few squelchy boots did not help the matter.

Also, Roe like to bed out of the rain drops, so hunting in and around known bedding areas is fruitful, as those waterlogged fields can mean the deer will avoid them and so pin pointing their location becomes easier. As luck would have it, the weather turned completely on its head for two days and we had had a frost, which I find good for keeping the deer confined to smaller areas, where they do not have to move much but just browse on high energy food, such as brambles.

Problem was, all that frost now made the ground ‘crunchy’ under my feet and so stalking was at a snail’s pace, which is good as it makes you really look in, through and under foliage. I also had an advantage, as I had borrowed a Helion thermal imager from Thomas Jacks that made locating deer so much easier, cheating yes but what a tool to save time being in the wrong place.
We had several heat signatures down in the usual bedding area, so the thermal just confirmed what we knew, but I could now see all deer due to their signature; something that a binocular could never do, so I decided to set up nestled into some brambles and wait for the Roe to emerge from the undergrowth.

45 minutes passed and a buck in velvet was first out, then a doe and another with two youngsters. On the ride, I could make out a last year’s doe without dependents and so I slipped off the safety and a 75gr V-MAX was on its way across the short 80-yard distance for a perfect heart shot. In fact, I had to wait another 20 minutes for all the deer to disperse, as they had not seen me or where the shot had come from.

More haste less speed is definitely the Roe doe motto in my type of stalking this species. Take time to understand their habits in all weathers, terrain and available food and in that way, you will become a better, more successful stalker and keep the land owner happy too.