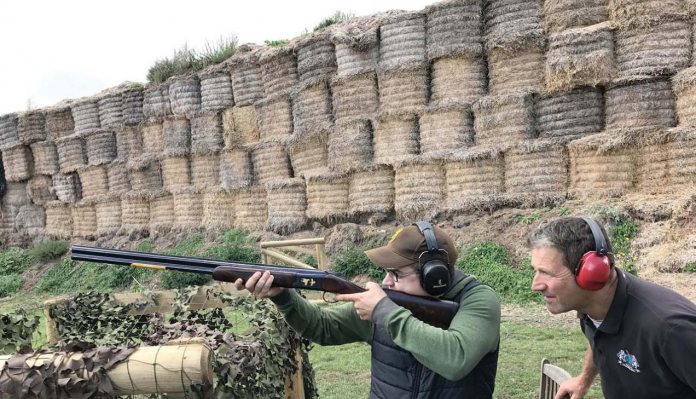 Do you remember your first time? I do! I made a bit of a pig’s ear of it too, as I aimed at the centre of mass instead of behind the shoulder and it ran, but fell after 100 yards, so no dramas. More luck than judgement to be honest and I reckon I must have hit it in the liver and it bled out as it ran! Well, let’s not talk about the gralloch either! Many years and deer later and with grateful help and advice from friends, I now consider myself reasonably competent. And over the years, I have taken a few people hunting, which is very satisfying and I suppose a bit of karma too, if you believe in payback.

Browning EU, I suppose, like other large companies, has an ‘events manager’, whose job is to liaise with journalists etc. and arrange for events and venues to highlight new product. The latest person in this position is Adrien Koutny, who I met for the first time in 2016 in Sweden and we have become friends. Up until a few months ago, he had yet to shoot a deer, and we were discussing this in France this year at another Browning do and I said, if you can make it come over and I’ll see what can be done. Sure enough, we got a weekend sorted and he also supplied the guns and ammo in the form of the new Browning X-Bolt McMillan in 243 Win, a T-Bolt in 17HMR and a 725 Hunter (black) O/U shotgun. I also had a Winchester SX4 on long term loan too.

I’d shot the X-Bolt and 725 at the French do this year, so was keen to use them again, as they did impress. The plan was deer and hopefully some pigeon shooting, as Adrien was keen, but the birds were not obliging. Instead, my friend and the game keeper Andrew Johnson, jacked us up to visit the Phillip Thorrold Shooting Academy just up the road, as they are now offering a pigeon shooting course. Philip is an international shotgun coach, and as might be imagined, an expert shot in his own right, with many titles to his name. He and his son Ben run the academy between them.

On the range, we got familiar with the X-Bolt again and zeroed it in, trying both the new 100-grain Winchester Extreme Point and their old and proven 95-grain Ballistic Silver Tip (BST). In my opinion, the latter probably being the best rifle ammo they make and the load the rifle preferred. Happy with Adrien’s marksmanship, with the rifle shooting an easy inch at 100m, on a Roe deer target that shows the skeleton and vital organs superimposed over a full-sized picture of the deer, I pointed out points of aim. For our purpose, all shots would be behind the shoulder for the classic, heart/lung shot that puts them down on the spot!

It’s at time like this that the reality of the situation needs to be explained and I gave Adrien what my daughter Chloe calls ‘THE TALK’! We are shooting a live animal, so think safety, as to arcs of fire and back stop and trigger don’t rush, don’t panic, aim true and wait for my commands. Also, if at any time you’re not happy with what you’re doing, due to factors like range, angle etc. then stop; equally, if I say stop, then do it! I also explained that Muntjac of either gender were in, but it was only Roe bucks now, which are the two main species we see on the land.

All the shooting would be done from double high seats, so I could mentor on the spot. So, all revved up and ready, we stowed our gear in the caravan and it started to rain. In fact, it tipped down to put it bluntly, sitting on a ride at 17.30 the rain was hammering of the roof of my Landy like a Keith Moon drum solo, with no sign of stopping. So, it was an early bath and off to the chippy for a night in and to sample some Belgium beer Adrien had brought over. Saturday dawned bright and dry, so it was off to the low seat on what we call the long meadow.

This seat is strapped to an oak and sits on the boundary of two fields. On the right, it reaches out to 500 yards and on the left, the front of a wood that angles to the left from 100 to 170 yards. Both fields had been productive in the past, so I was confident, as I knew all the approaches. Unsurprisingly, Adrien, as most Europeans do, wanted a Muntjac and as it happened, the gods were kind. After about an hour, I scanned across the right-hand field, having been checking out the left for about two minutes and bonanza – two Munties and bugger me, two Roe in both cases bucks and does in equal number.

I nudged Adrien and said it’s your choice mate and unsurprisingly he picked the Munty. Unusually, both the buck and doe were walking across the field sedately, with the Roes about 50 yards behind. The buck was trailing the doe and I pinged him with my Swarovski 8x42 EL Range binos at 125 yards and he was getting near the edge of the field where it went into the woods. I said; ‘I’m going to stop him, be ready’; raising my hand to my lips, I squeaked him and he stopped; boom, the X-Bolt fired and he dropped cleanly shot; nice one mate! The doe was gone and I looked at the two Roe, who stopped for a second, then had it away too.

The shot went in behind the shoulder as instructed; it was a mature buck, probably about 3-4 years old and beautifully marked and a fine example of the species. It had not long shed its antlers, as the tiny set it now wore on its large pedicles were still in velvet, but a good animal none the less. The look on Adrien’s face said it all; YES! If you’re all about the trophy, a Munty buck is the thing to have and it would be in my larder by Sunday! I was impressed with Adrien’s coolness for his first kill, though I could see he was still pumped on the adrenalin rush.

Breakfast and then clay pigeons

I gutted it with Adrien looking on and a little wide eyed; that’s another thing he’s going to have to learn! Then it was back to the chiller and a quick cleanup and a full English breakfast at the Norton Dog pub in the village. Then chill time until the afternoon and some simulated pigeons at Philip’s place.

The Shooting Academy is most impressive, with every sort of trap and set up you can imagine. The pigeon area consisted of individual hides to sit in or shoot from behind. Being a new convert to doubles, I took the 725 and Adrien was happy to have the SX4. The simulation was good, with high and low crossers, along with high birds coming right over the top and even clays simulating them coming into land where you must shoot about a foot underneath, which initially proved quite tricky. Once we got our eyes in, we were soon hitting a good percentage of the birds and I fell in love with the 725, something I thought I’d never say about a double! Phil was giving advice and critique and showing off his skills; firing from the hip and even going one handed, the man is a shooting machine and I’m going back for some instruction soon.

That evening, we were up in the big scaffold tower in Hunston wood and saw a few deer during the evening but most were not stopping. At about 20.00 I spotted a shape, which turned out to be a young Munty doe, I pinged her at 240 yards and told Adrien to put the cross hair on the top of her back and if he was happy, shoot. She wandered to the left and stopped about 10 feet from cover; bang and a repeat of this morning with another well-placed shot. Damn that boy can shoot! With her in the chiller too, we cleaned up and headed into town to get a Chinese take away and finish off the beer. We had to be off by 07.00 on the Sunday, so that was the hunt over, I put both deer in my Blaser Wilde Wane bag, packed the car and got Adrien to Colchester station for 08.00, as he was taking the Eurostar back to Belgium. It was a great weekend and I feel very proud that I managed to get Adrien into two deer that he shot exceptionally well and started him on his hunting path.