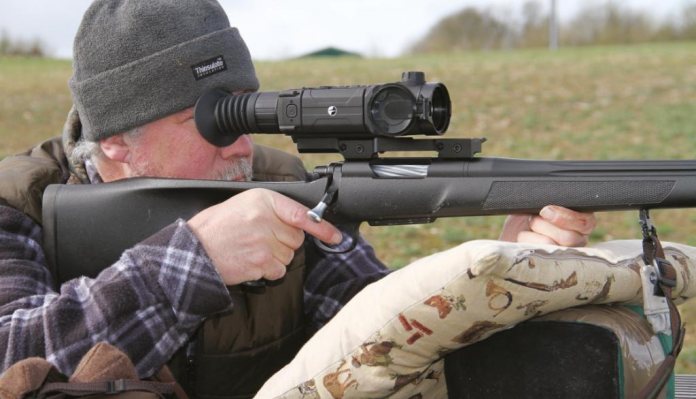 I like to think of myself as a traditional stalker - wooden stocked rifle and green moleskin trousers - you know the type! I’ve stalked successfully this way for many years and aside from a few tweaks along the way, nothing much changed, until last September!

I was showing my friend Derek some new ground, where we would stalk does this winter. As we entered a particularly dense area of firs, he told me there were some fallow ahead, lying down. Although out of season, it’s always good to see what’s on the ground, so up went my binoculars. Despite directions, I just couldn’t see anything.

Derek had his thermal imager with him, and this was my first experience of one. After a minute or so the deer stood, and at last I could see them, silhouetted against the brighter field at the end of the avenue of trees. Had this been winter, the rifle could have been up and on sticks, ready to shoot after identification.

Later, we came across a muntjac; well, Derek saw it 20m away, unmoving behind some light foliage. It was extremely hard to spot through binoculars, but it eventually moved a little, so I could make it out. He shot it, but without the imager I’m sure we would have walked right past it!

I was hooked. The next morning I was on the phone to Scott Country and ordered a Pulsar XQ19 at £2000 (now slightly updated and sold as the XQ23v, £1200). The rest of the article is written with my experience of this unit, but Derek’s Guide IR510 is of a similar spec, with the added bonus of being able to take and record images - something I didn’t think necessary at the time, but would have been useful to illustrate this article!

So, an imager detects heat differential, only in a direct line of sight. A deer behind a large tree, heavy foliage or lying hidden in crops will not be visible. I’ve since shot deer and stood back from the carcass looking at them with the device - you need to be close to be able to pick up the heat signature while lying there, or it can be hidden by low vegetation or small undulations in the ground. Left a couple of hours to cool down, a dead roe doesn’t register. Heavy blood trails can be followed if very fresh, but longer than a couple of minutes, forget it! If it is not a complete dog replacement, what can an imager do for the stalker aside from showing body heat?

Having shot a roe, for example, you can use it to instantly see if the rest of the group have run off or are standing nearby in light cover, as can frequently happen, waiting on the fallen deer, which can often be visible too. You can see how effectively you stalk, by looking at scrapes you come across. If the unit registers residual heat in one, then you have likely disturbed a deer that was lying up, just prior to your arrival. I think more than anything, the imager has shown me just how many deer sit there, watching you. I’ve spotted, and then purposely walked past both roe and muntjac, glancing back with the imager to see them, mostly hidden from sight but keenly watching me. Over the years, I guess I must have passed hundreds of deer and never even thought.

The weather has a bearing on the usefulness of the imager. They work best on dull, grey days, where most things are of a uniform temperature - except wildlife. In bright conditions, and in the warm spring to autumn months, the sun heats exposed areas like branches, tree trunks and the forest floor, via shafts of sunlight through the tree canopy above, giving distracting hot readings through the viewfinder. This makes the imager less than useful; I will be using my binoculars most of the time from May until the doe season starts again in November!

Before dawn, deer can be clearly seen in the open of course, but I have found on my ground that they frustratingly melt away as the sun comes up, just as you have enough light to confirm through binoculars and get a shot off! Did the imager prove useful during my winter cull? Absolutely! I shot slightly more deer than last year, but on fewer outings, meaning I disturbed them less. I was able to stalk an area more quickly, thus covering more ground in a day and cull more each time out. Looking across a sloping wooded area, it could tell me if deer were present with one sweep. Using binoculars, this could easily take 15 minutes or longer to examine every bush and shadow.

However, I don’t believe an imager is for everyone. I have some 3000 acres to control, but a stalker with a smaller parcel of land wouldn’t find the same benefit as I do, as they wouldn’t need to move around their ground as much, relying more on a ‘wait for them to come’ approach. Another area I have, away from my main ground, is around 50 acres. I don’t need one here. For the hunter shooting solely from high seats, I don’t think they would be particularly useful either. When I am in one of mine, I don’t use the device. I am looking for movement, and can be quickly up with the rifle rather than faffing noisily between pieces of hardware.

Another way of looking at this expensive piece of equipment is ‘cost V return’. I achieved my cull with fewer outings, ‘saving’ about 5 days. How quickly would the outlay be recovered, if at all? The answer would be different for all of us, but for the occasional or recreational stalker it is irrelevant, as the whole point is to be out in the field in the first place!

Nonetheless, for someone with a cull figure over a substantial acreage, the advantage is clear. In fact, it’s a game changer, no two ways about it. If the deer are there, you can spot them. I would go as far as to say the advantage is similar to the one surrounding the debate that ran about open V telescopic sights well over a generation ago. This questioned if it was ethical or sportsman like to use a riflescope, as having one made it ‘too easy’. These days we universally use scopes, without a second thought! The way I use the imager only aids the spotting of deer, there’s still much work to do after that in stalking close enough, identifying with binoculars, then making a safe shot if a cull animal so, yes, I think it is ethical!

There are imaging devices available that are a complete rifle scope replacement, marketed towards vermin shooters. Pulsar’s website shows a buck in the sights of a thermal imaging scope and talks of them being recoil proof against larger calibres not suitable for vermin! So no mistaking the potential or target audience in other countries! It wouldn’t be illegal to use one in daylight here I suppose, but it also wouldn’t be difficult to mistake a dog’s heat signature for that of a muntjac without identifying with binoculars.

Some years ago I came across two people, deep in a wood, who shouldn’t have been there but were quite innocently watching and filming badgers at dusk. They could have looked very much like deer through an imager, hunched over a camera tripod.

Deer stalking is rapidly changing; technology now enables us to spot things we would not easily see with binoculars in daylight and also, of course, at night. I would not want to turn back the clock to a less advanced age, but we should be very aware of the added responsibilities these advances bring before our sport, and occupation for some of us, is brought into disrepute with these devices.

I’m talking about the elephant in the room: deer stalking at night with a thermal imaging rifle scope. Are the large numbers of these units being sold at c. £3000 to over £4000 really all used against fox or rabbit? The thermal imaging rifle scope is an absolute gift to poachers, unfortunately, who can operate in complete darkness without the need for the powerful lamps used previously, which could have given them away.

I’ll happily use the hand-held imagers, but wouldn’t be entirely comfortable using a thermal scope for deer stalking as dusk, and therefore the end of legal stalking activities for the day, never comes through one of these devices. Yet I can see the leaps forward in terms of range finding, bullet drop and windage compensation, not to mention individual zeroing profiles for three different firearms and a range of electronic reticles makes for a very compelling package. Deer stalking is rapidly changing indeed, through the technology we can harness, which in turn throws up real ethical dilemmas along the way.