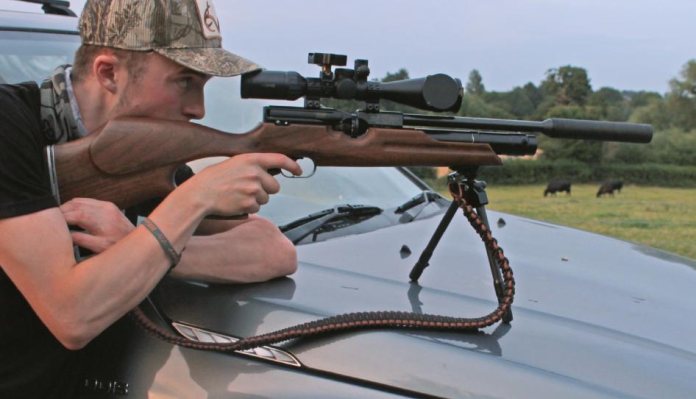 The imminent arrival of new young pheasants to the estate, means much less opportunity to get out with the air rifl e. The keeper would soon be receiving this season’s poults and, as soon as they arrive, I no longer have free access to roam. I quite enjoy the variety of switching my attention to the beating season. Luckily, I have a few more air rifl e permissions, to avoid any withdrawal symptoms and get me through the winter. With plenty of pigeons still around, it seemed rude not to take advantage of the time I had left.

I reckoned my best chance would be to ambush them in a woodland a short distance away from the main estate grounds. We don’t release pheasants in this wood, instead, feed it up, which brings them in from the neighbouring wood. When they fi nd the free grub, they often stay. It normally takes the young birds three or four weeks to get here. This means an additional month of air gun shooting than in the other woods where there are pens.

With the nights getting shorter, it was feasible for me to stay out till dark and ambush the pigeons when they land in the trees to roost up for the night. The leaf cover was pretty thick, and the ground was a mass of vegetation, consisting of nettles and various other nasties, ready to have a go at me. I would have my work cut out to build any kind of a decent bag, but I was willing to sit out and give it a go. Even if I didn’t shoot anything, it was warm, dry and still; simply, a pleasure to be out here.

I had an idea of the level of vegetation in the wood, but not quite to the extent it had grown since my last visit. Shorts probably weren’t the best choice; will I ever learn? Once more I was carrying the HW100KT in .177, paired with the Hawke Airmax scope and Sports Match mounts. For me; the best hunting combo I have used to date. Camo was basic to be polite, a black and white T, grey shorts, a cap and buff. OK, I was not exactly ghillie-suit-dressed-up for an ambush, but it was warm, and this was comfortable.

Aware that there may just be a pigeon sat up already, I entered the woodland gently. Last year’s dried twigs were still hiding beneath the leaves and nettles like an early warning system, waiting to be sprung if I trod on one. Two birds were alerted by the slightest sound and got up, clattering through the canopy in a desperate attempt to get distance between me and them. Learning Note: So often, I have sneaked into a wood and a pigeon or two have exploded out of a tree with great commotion. At that point, I have switched off and walked on, only to have another two fl y off. So, I stood stock-still and scanned the trees.

Through a hole in the leaves I could just spot a patch of grey. I raised the rifl e, still a little unsure if it was a pigeon or just a trick of the eye. The Airmax glass magnifi ed the area and brightened everything, making the bird clear to me and that a shot could be on. I wasn’t stable where I was, the ground was un-even and I had no rest. A cherry tree stood not too far away on my left. Could I edge my way over and use it for support? Paying extra attention to where I put my feet, to get one in the bag this early would be fantastic. But I didn’t want to get carried away and spook it, so I crunched my way to the tree and set up.

I couldn’t see its head, but I did have a clean shot through the side. I have made this many times before and I knew that at this range, approximately 18 yards, the .177 would carry more than enough energy to punch straight through into the vitals. I squeezed the trigger and waited for the faint pop of the 100. The pellet fl ew through the hole in the foliage and made contact with bird no.1. It rocked forward and dropped into the nettles.

With a bird now on the ground I knew the pressure was off. I found a little patch that looked promising and squatted down, using the undergrowth to conceal me as much as possible. The main tree I was targeting didn’t have a great deal of coverage on it. It looked a little sickly, which was a shame but would hopefully make my job easier.

A number of pigeons came in, all landing in different trees. It was a little disorientating and this made it tricky to follow them and pinpoint where each one landed, to choose the best and easiest shot. I could only actually see one, so that would have to be my bird. As with the last, it wasn’t far away. I wouldn’t need to think about adjusting any aim points, bang on was the way to go. I could see the head on this occasion, and not much else for that matter. It was bobbing back and forth, trying to spot any dangers lurking below.

I kept still, knowing movement would be my biggest give away with limited camoufl age, and as it settled down, that’s when I began to move. Slowly, I brought the rifl e up into my shoulder. My position wasn’t exactly normal, but this was the only angle I could see a clear shot. I was squatting, using my elbows on my knees to support the rifl e. It wasn’t a particularly stable either, but I was still sure I could make a humane shot. It was a 50/50, as I would either kill or miss entirely. Another shot was sent away, I had another one in the bag.

The evening quickly wore on and I managed to get a fair few birds in the bag without hardly moving. The sky above me was turning a brilliant shade of orange through the leaves. I decided to break cover, pick up the eight birds shot and take time to watch the sunset. It was big and spectacular, I took photos, but the camera couldn’t do it justice. The colours and shades in the clouds were out of this world, the oranges, yellows and deep shades were worth coming out for, never mind the shooting that had gone before. I enjoyed watching the sunset a few more minutes until the colours peaked and ebbed away. Time to set up the birds for a fi nishing photograph. As I was doing this, I wondered if there might be any rabbits out. This ground has produced more rabbits than any other of my permissions, so fi gured it would be worth a look.

I hopped in the car and had a little trip down the drive, keeping my eyes open for any giveaway signs. The sun was gone, so it was pretty dark now, under the hedgerows, making spotting rabbits diffi cult. There was a little white fl ash of one running down the hedge line. I brought the car to a gentle stop, the squeaking brakes probably not helping matters. I fi tted the Spartan Javelin to the forend and plonked it down on the bonnet.

My Hawke LRF400 range fi nder told me the rabbit was at 49 yards. A little more out there than any of my other shots on this night but I was still happy. There was no wind at all, especially down against the shelter of the hedge. I gave a ‘squeak’ for it to raise its head and held 2 mill dots above where I wanted the pellet to land, below the ear, behind the eye. I released the shot and there was a defi nite crack of it making contact with the sweet spot. The bunny jumped and began kicking franticly, a typical sign of a head shot. The nervous system just gets completely and instantly shut down, sending the muscles into spasm. I had already re loaded the gun, just in case but no follow up shot was needed but of course, this was not the case.

I hopped the fence and headed over for the retrieve, rifl e in hand if another shot presented itself. I got closer and inspected the rabbit and shot placement. The pellet landed perfectly, there was a lot of blood around it, another good sign of a humane shot. It was three quarters grown with clear eyes, no obvious signs of myxy. This would likely be a perfect eater. I gutted it there and then, the organs all looked clear of any disease. This was defi nitely one for the pot. There is a lady who comes into Jayne’s Fishing Tackle (the gun shop where I work), she’s been pestering me for rabbits for weeks,
so this one would make her very happy.

I was happy that I made the most of the opportunity I had to roam free with the air rifl e. The trip was a great success. You just never know what you are going to come home with. Shooting for me is much more than the process or even the results. In this case, that was nine pellets, resulting in eight pigeons and a rabbit but the thing that will live longest in my memory is the perfect sunset.