Airgun Hunter: A Walk in the Sun 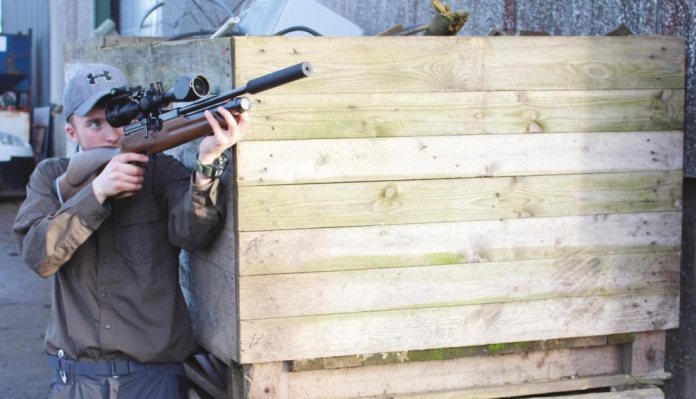 We had some peculiarly warm weather this winter, which has been bettered by the early spring sunshine which needed making the most of. So, one afternoon, Tom and I took a stroll around the farm with the HW100. He typically specialises with the shotgun, but has recently shown an interest in air rifles, which is great. There are some situations where an airgun is the simply the best tool for the job.

Tom’s Mum and Dad own the farm and had told us they had seen an increase in pest numbers around the buildings and horse paddocks.

They asked us if we would concentrate on reducing the number of flying vermin. We accepted the invitation, of course! The afternoon’s hit-list included regular favourites: pigeons and crows. When shooting alone, I like to have some kind of plan as part of my preparation, even if I change it, but we weren’t too sure of ours. Most of our hunts together are just played by ear and we tend to make it up as we go along. It seems to work; so, yet again, the plan was not to have a plan.

We headed out and zeroed the gun. Tom’s rifle was out for a service, so sharing was the only option. We set a target out at 25 yards, just to be sure the scope hadn’t been bumped in transit. I had finally got around to fitting the Spartan Javelin adapter to the forend, so we could use the super lightweight, carbon fibre, detachable mega bi-pod. I was so used to using the bulky, heavy traditional models that permanently lived on the underside of the rifle, so the Spartan came as a rediscovered and pleasing shock. I certainly won’t be hunting without it anymore. I shot first, having the most experience with this specific gun. As per usual, the HW was pellet on pellet. Tom had a few shots following me, just to re-familiarise himself with this set up. In no time at all, we were ready.

We decided to have a walk, dropping past the vermin hot spots as we went. Places like the roofs of particular sheds, lone trees in paddocks and even a neighbour’s garden. She gave us permission to shoot the pigeons pooing on her drive that had come off the fields. While, technically speaking, you can’t shoot a wood pigeon just because it’s making a mess on a drive way, our reason was crop protection, it was just a bonus that she had extended our roaming area.

The first bird we spotted was cooped up in a bare silver birch tree just around the corner from one of the sheds. It was that steady we even managed to grab a quick photo before moving in closer to attempt a shot. From our current location, the bird was well out of reasonable shooting distance. If we wanted a clean shot, we needed a quick think on the best route to get in closer. There was an ivy hedge 15 yards away. If we could just get to that without the pigeon spooking, we’d have enough cover to get in within striking distance without being spotted.

We both crouched down as low as we could and moved forward, this way we would be hidden by ivy bush sooner. Now that step was done, we followed the perimeter of the 4ft high hedge for another 15 yards. Just like that, we were in range. I popped my head above the cover, to check that the bird was still there. Thankfully, it still tucked down, unaware of the pressing danger. I ranged the bird with my Hawke LRF 400, and it confirmed we were at shooting distance. Tom had the rifle. It was his farm, so only fair he went first. He held half a mill dot above the pigeon’s head and waited. I was confused why he hadn’t taken the shot, but he knew what he was doing. He was preparing for the perfect moment to shoot, he made sure that he was completely calm and 100% ready before pulling the trigger. His patience was rewarded, and the bird tumbled to the grassy garden with a well-placed head shot. A valuable lesson that serves as a timely reminder not to rush and just to chill. It sounds obvious but even now I find myself getting excited and missing sitters.

Now, it was my turn with the HW; no pressure. We sat tight with the sound of corvids loud overhead. I guessed that they had spotted the dead pigeon and were coming in for a closer look. Down they came, landing on the shed roof we had just come from. We were within range, we had only stalked 30 yards from it. The elevation was too much for Spartan, so I decided to take the shot, seated. The ivy was still useful (one of the few times it ever is) because it was a nice comfy back rest, allowing me to take a steadier shot.

I used the same aim point as Tom, half a mill-dot and held on the rook’s head. It took a while for it to stop moving and squawking. Patience again was key for a successful shot. I had to keep as still; corvids, in my experience, are the hardest birds to shoot with the airgun. They just see things that are out of place and go without a moment’s notice. This one, however, stayed. It stopped moving for just a second and that’s when I seized the opportunity. The sound of the pellet cracking its skull, and the thud as it hit the floor sent the rest off in a hurry.

We made the call to break cover to pick our respective birds; they were both in opposite directions, so I took the rifle. Before I got to mine, I clocked a dove sat in the top of a tall fir tree. Knowing this ground pretty well, I remembered that by keeping tight to the farm house I could make my way in far closer without it having a clue. Much like how we stalked into the pigeon before using the ivy, only this time, my cover was brick.

I began to move in. It wasn’t a challenging stalk, because I could just walk normally with the assurance of being fully concealed. When I got to the corner of the house, I peeked around to check the dove was still sat. Yep, yet again it hadn’t budged and looked happy. I backed off to one of the trucks for a solid rest. The Spartan came out of my pocket and went onto the gun. The bonnet of the farm’s VW Amarok served as the perfect rest. One hand was on the trigger, the other, at the butt end, making micro adjustments if and when needed.

I aimed bang on crosshair. Birds today seemed to be pretty used to movement of people, which allowed me to get within range and this dove was no exception. I guessed it to be 25 yards or just under. I felt the crisp break of the near perfect HW100 trigger and watched it fall from the very top of the fir tree. It went out of sight behind a wall, but I could just make out the sound of it hitting the ground. Another collared dove flew overhead, perhaps the dead one’s mate? It too landed in the same tree and sat perfectly still. It looked down at the last bird. I cycled the sidelever of the 100 and got back on aim. A slight breeze had picked up from left to right. The shot was still on but this time I aimed slightly to the one side. Within no time at all there were two birds lying next to each other, both shots almost identical.

Tom joined me again. I had three shots in quick succession, so was aware that it was his turn to take charge. Our no plan, plan had worked well so far. We both had some shooting and the bag was starting to look worthwhile. There was one small area that we hadn’t checked and that was some waste ground around the back of the farm buildings. Popular pigeon spots included a tree held hostage by ivy. We pulled apart the first pigeon’s crop to see what it was feeding on, sure enough, ivy!! We stalked, knowing there was a good chance of a shot around the corner. Gently, we crept closer, until we had clear sight of the tree. Nothing, or so we thought. At first glance, the green foliage looked void of targets, but we decided to wait, in case anything flew in. It wasn’t long before we spotted some movement, potentially just a black bird but likely a pigeon. Tom got down on the Spartan and waited for his moment. The pigeon poked its head out and ‘crack’, he nailed the shot and I gave him a pat on the back. A call came after another short walk and it was time for Sunday dinner, where had the afternoon gone?

A lovely taster session of what’s to come in the summer ahead (I hope). Tom and I are working better and better as a team each time we go out. Could things be even better with a plan, or is being random and responsive just as good? I’m not sure. At least, next time he will have his BSA back from the gunsmith and we should be able to bag up some real numbers. ‘If all goes to plan!’