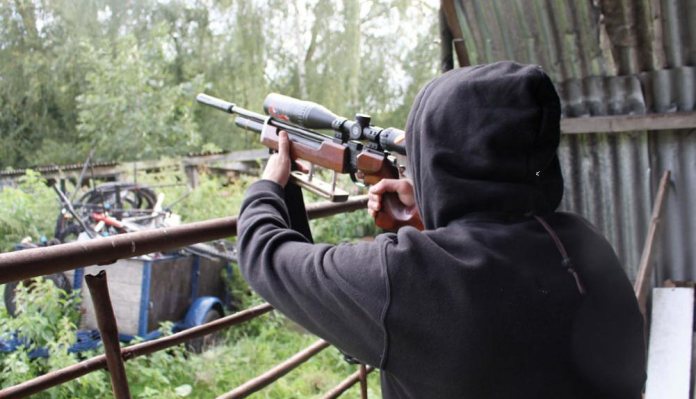 I love this time of year! It is perfect for hunting with an air rifle. The leaves are coming off the trees, so spotting pigeons and squirrels is becoming easier (compared to earlier on in the year). The vegetation is still just about alive, yet another great advantage to this time of year. The really cold weather has yet to kick in but day-by-day there will be less and less cover, so camouflage, and concealment becomes more of a challenge.

It was a calm day and I headed out with one of my favourite pest controlling air guns, the Air Arms S200, which I can’t compliment enough! The ranges that it is capable of shooting just blows my mind. Plus, they are extremely hard to beat for value and I think you get great performance for a relatively low price tag. Is it possibly the most under-rated rifle out there? The CZ barrel never seems to falter and over the chrono it’s as good, if not better than most.

One minor but nagging shortfall is the trigger. Mine has been adjusted as good as I can get it and is still not perfect, but for a rifle that cost me just over £200 second hand, I shouldn’t really expect Match grade. The shape and size of the stock seems to suit me. It’s almost target-orientated. It has a square forend and a virtually upright pistol grip. I am starting to notice these features more and more in both the air rifle and centre-fire worlds.

Hunting stocks are becoming increasingly like target designs with adjustable cheek pieces and butt pads, which has to be a move in the right direction. Something that the great Terry Doe once told me springs to mind: “If the rifle fits you better, you will shoot better.” He’s absolutely right! The 200 furniture seems to tick my boxes when hunting and I shoot better for it.

I pulled into the field, as I like to drive down to the sheds before stalking and the birds and even rabbits are used to cars, so don’t tend to spook as much when shooting from the vehicle. This time, there was nothing to be seen, so I headed out on foot. I went extremely light with no camo and had a bright orange hat on. I only carried my rifle, pellets, Hawke range finder, Spartan bipod and camera. It was pretty old school and worked well.

As I came to the corner of the first hedge, I peered round and spotted a dove sat pretty, up in a large willow tree. I don’t usually shoot them, but as this is a farm and their numbers are high, I decided to go for a shot. The elevation was a little tricky and I had to take this into account. I thought of the saying in the film, American Sniper; ‘Aim small, miss small’ (Finding a speck and aiming at it). If I miss, it will still likely be close enough to be a kill shot.

However, if I aim for a general area, the chances of injuring the quarry, or missing, it are greater, that’s my reckoning anyhow. I pictured the Dove as if it were an HFT target, on the laser it was only 30 yards, so dead on; the elevation meant that I would be aiming ‘bottom of the kill’, so I dropped the cross hairs ever so slightly. From the seated position I was solid and squeezed the trigger of the 200. The un-silenced shot gave a bit of a crack and the Air Arms Diablo Field flew through the air and hit the dove with a lovely heart and lung shot. It dropped with hardly a flap. As it was such a crack due to the S200 being ‘air stripped’, rather than having a silencer, I walked to retrieve it knowing that anything else in the vicinity would have been spooked.

I decided to head back to the shed near where the car was parked. I have had great success here before just sitting and waiting for pigeons to swoop into the trees. The slowly setting sun began to beam down onto this idyllic field, making everything a welcoming, warm amber. I reached the sheds and made myself comfortable in amongst the various bits and bobs that were stored and gave myself a pallet as a back rest. I was only there 15 minutes before a woodie came in.

I just saw a flash of grey as it went into the tree and then out of sight. From my current position I did not have a shot, as the roof of the tin shed was obstructing my view. I rose and crept over to the gate opposite and figured that if I used this as a rest, I would be solid. I moved over, and the pigeon came into view. It knew I was there but didn’t seem bothered as it basked in the last bit of the day’s warm sunshine and quite possibly the year’s too.

As I sighted up the pigeon, I used the hamster to give me that bit more elevation and rested my forearm on the gate. The woodie was a lasered 45 yards towards the rear of the tree. Not a problem on this still evening. With 1.5 Mil-Dots hold-over on the Hawke AMX ret’ and a head shot was almost guaranteed. Again, the peace of the countryside was briefly interrupted by a shot, shortly followed by frantic flapping as the pigeon clattered down through the brittle dead branches of the willow tree, before coming to rest on the ground.

When I went to retrieve it, it was indeed head shot. I picked it up and put it with the dove by the car. I thought I’d just go for a walk round the field in the hope of shooting a rabbit. I knew I didn’t have too much longer. The shadows were lengthening by the minute and I gently made my way over the stream and into the small patches of trees that were scattered over the property. I wasn’t having all that much luck but there wasn’t anywhere I’d rather be. Being out on days like this really are special, and I enjoy every second of them.

I turned back to head towards home, feeling that maybe my day was over. I headed back down one of the grassy banks and scanned the area I was heading towards, just in case a bird had come down or rabbit hopped out while I was away. At first, it looked bare but then I noticed a pigeon. It was just walking and pecking at the grass on the field. It was over 100 yards away, so I needed to get closer. The cover between me and the quarry was good, so I didn’t need to be all that sneaky, not for the first stage anyway.

Three in the bag!

I walked down back under the hawthorn bushes and over the stream at a fair pace. I didn’t want the pigeon flying away because I was too slow! I made it to a shed for cover and I was a little warier now, as I was tantalisingly almost within range. I slowly crept through the cattle shelter, which changed the angle of approach and made me unsure on the bird’s exact location. I peered out of the end of the shelter, to try and spot it but had no joy, maybe it had flown?

I retreated and changed my angle of attack to the left of the shed, anticipating that the pigeon may have moved. I was hunched as low as I could be, knowing that the bird could come into view at any moment. By the time I located it, I was well clear of the shed I first intended to take the shot from, I was in the open. It was just over the brow of a small mound in the field, hence it being out of sight for so long. I dropped into a kneeling position and steadied myself for a shot. I could see that it was very close now. I could hardly believe that it hadn’t flown already. I aimed bang on crosshair. It was facing away, and the pellet drove straight between the shoulder blades. Its wings splayed out and its head fell limp on the ground. That was three in the bag.

I gathered up all the shot birds and placed them in my game bag, so as not to make a mess in the car on the way home. I phoned the landowner to let him know the result and he was happy. Job done; for today, anyway!

I am very sad to write that since this visit, the landowner who so kindly allowed me this permission and took such interest in my shooting has passed away suddenly. He had become a good friend to me, full of knowledge and encouragement. I miss him and will always be reminded of him when the sun shines here like it did on this occasion. I owe him my thanks and dedicate this article in memory of him; Mr J!