Airgun Hunter: Back to Basics 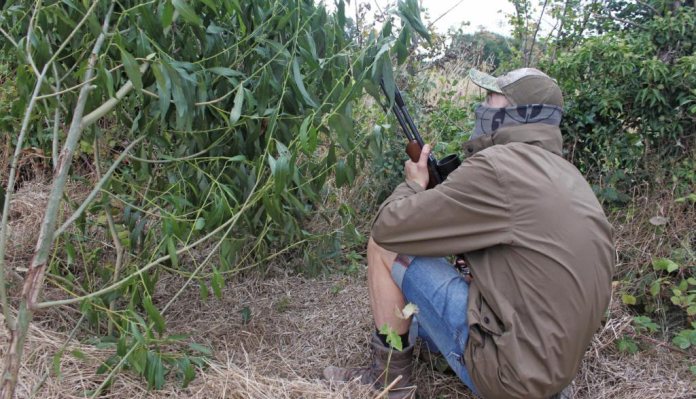 It’s a warm, muggy day and all the corn on the local fields cut. The area has been hammered with the 12 bores, by me and a few other lads. Altogether, we have had over 1000 pigeons, meaning the remainder are getting more than a little bit skittish and reluctant to come into decoys. By way of a change, I am ‘writing’ this article out in the field while waiting for pigeons; a kind-of running commentary into my iPhone. Anyway, trying to get the birds to land on the floor with the air rifle is next to impossible. If we were having trouble shooting them with shotguns as they flew over, I certainly have my work cut out with the air rifle.

Before I set off, I knew that instead of decoying, my plan of attack would be to find the right sitty tree. There were many different options from Ash to Willow, but in the end I decided on an Oak, which is where I am right now. I’ve been watching the flight lines and seeing pigeons heading to and landing in it on the edge of the hedge line. This seems to be bringing in the most birds. I want this shoot to be old school. So, I chose the faithful Springer, in the form of my Walther LGU, paired with a PAO scope.

The scope’s attached with Sports Match mounts and I find this is a lovely hunting combo. This wouldn’t necessarily be the set up I would use for shooting out of the hide. Springers are often cumbersome in confined spaces, as they require a lot of body movement when re cocking, so for fast fire pigeon shooting, they are perhaps not the tool for the job. However, on this session, as I was more opportunist stalking and sitting, that would not be an issue.

The other essential kit is my Ridgeline seasons jacket. The weather is showery, and I am likely to get wet; it’s light and breathable, so ideal for sun and showers. It has plenty of pockets for items like my rangefinder and doesn’t restrict my movement. Face concealment means a green Spartan Buff, paired with Realtree cap. Hopefully, that will be enough to keep the light off my pale face and the pigeon’s attention away from me. With having very minimal camouflage, I want to bring the odds as favourable to me as possible. I have just cut some Willow branches and fashioned a makeshift screen. This will hopefully conceal any necessary movement when making adjustments for shots, altering the scope or cocking the rifle for follow-ups.

My hide is set up and now it’s just a waiting game amidst the showers. I continue to watch the pigeons, still a little unsure if I am in the right place. One great thing about shooting like this is, if something isn’t quite right and they are landing somewhere else, it’s easy to pack up and move. Thankfully though, it’s not long before the first opportunity flies into the tree. I have pre-ranged the branch this pigeon has landed on. It was comfortably within 25 yards. There is still a bit of a breeze, so I am thinking about which side of the bird’s head to aim. I poke the gun through the Willow branches and line up for a shot.

The wind is left-to-right, so hold just off to the left hand side of the bird’s head. I’ll have to admit, the trigger isn’t exactly staggering on my Walther, so I had to pay specific attention to when it would break. I bring in the first stage and take up the creep of the second before the shot is released. A gentle nudge to my shoulder and the site picture goes blurry; the pellet is away, and it soon makes contact with the skull. There is plenty of flapping as the bird cascades down to the floor and lands in thick undergrowth. I have decided to leave it where it is, to prevent causing any unnecessary disruption. With it being concealed, I don’t think it will put any more pigeons off from landing in the tree. More rain!

I have used the LGU on many a hunting trip, hence knowing its capabilities. I have full confidence that whenever a shot needs to be made, it will do the job. The only weak link is me! I have had a little wait for the next pigeon. It’s a young one. I know this because of a lack of detailing on its neck and feathers. Generally, the younger birds are not quite as smart, and you can get away with making more movement without spooking them. Also, there is less density to the muscle and bone, so body shots/heart and lung shots tend to do a good a job, as any on juveniles.

I line up in the stiff wind and go for the larger target of the heart and lungs. The bird is now facing away from me and I have a clear shot into the back of the spine through to the vital organs, I take the shot and it drops forward without even raising its wings. It was on a slightly higher branch than the previous bird, so crashed a little bit harder into the undergrowth, again out of sight from any others. The LGU again has laid out a beautiful shot. It was nice and quiet and the surrounding pigeons in the nearby trees haven’t even flinched.

The next bird to come in, I missed. The wind must have blown a branch in front of my target area, right at the point of trigger-pull, deflecting the pellet and the bird got away without a feather ruffled. This can be expected, especially when shooting in conditions, which aren’t 100% ideal. I was confident that I was having a better day than if I had decided to bring the decoys. I can hear some of the guys a few fields away having a few blasts with the shotguns. I’ll give them a ring to see how they are getting on.

“How do Andy?” “Alright mate. How are you getting on up there?” “Just two or three for now. We’ve missed as many as hit. How about you?” “Pretty much the same. Send some my way!”

“If we don’t get ‘em first. Ha ha. Will do. Catch you later.” I hear another two shots in the distance. I wonder if that’s one more in the bag or just two more empty cartridges. Either way, I’m happy because I’m having just as much fun at a fraction of the cost.

I put the phone back in my pocket and settle back down. The rain stops but the sky is dark, pretty soon, two birds fly into similar positions, one after the other and I bag them both. The pigeons stand out well, especially when the sun comes out and with the dark grey clouds behind them, they pop out like lightbulbs. I love days like this, when the birds just shine so well when flying through the air. The on and off rain seems to have cleared the air and made everything that much sharper, deeper and clearer. The next bird dropped onto the sunshine branch and was dropped further with yet another headshot.

Me and the gun are working as one and everything seems to be going right. I am getting a little bit tired of sitting in the same place. I’ve been here for a couple of hours and, with the attention span of a gold fish and legs aching, I need to get up to go for a walk. I’ll walk the perimeter of the field, maybe the odd squirrel or pigeon will be caught off guard. The change of scenery is always nice and I never turn down the opportunity for a gentle stroll. I spot a pigeon up in a tree and use the vegetation surrounding me to stalk in. It hasn’t seen me and it is still sat there nicely with its head tucked in between its neck completely relaxed. I stalk slowly within 30 yards, raise the rifle, and feel pretty solid when squeezing the trigger and sure enough, another in the bag.

The day has been a pretty decent success, but it has just started spitting with rain again (I put the phone away and decide to finish off the article at home). This time, the clouds didn’t look like they were going to let up any time soon. I packed away the gear and picked all the pigeons from the vegetation. I must admit it was nice to use something other than the PCP for a change. Next time though, I think I will be going back to the modern way and taking advantage of that 14 shot magazine and completely recoilless action. The springer is a nice change. I like using it for a number of reasons: it keeps you true, doesn’t let you get away with anything, stops you thinking that you are better than your gun and keeps on teaching you the correct marksmanship principles. But it’s not as difficult as doing a running self commentary or gathering your day’s bag in shorts.