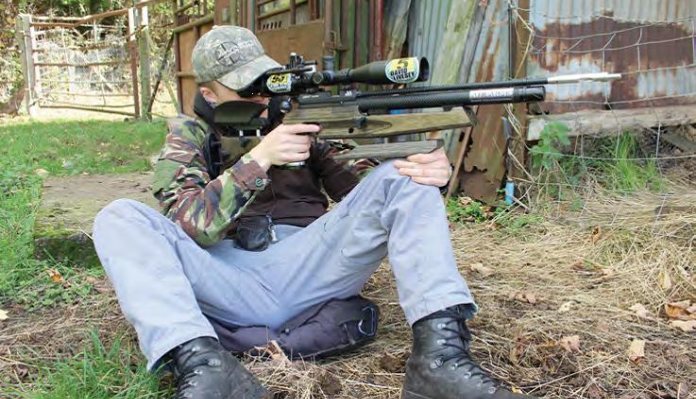 Having a growing YouTube channel, it’s important for me to stay abreast of the new shooting kit being released. However, the constant challenge to film without hindering my hunting experience seems next to impossible to achieve. So, I find myself regularly drawn to it specifically with this in mind. I saw an advert on social media for a new scope-cam mount called the ‘Side Shot’. The design is different to most, as it uses mirrors, which allows you to look through the scope as normal, without the shooter having to change shooting position. I have always wanted this feature, but was unprepared to spend upwards of £1000 on the other models on the market. This unit still isn’t cheap, coming in at just under £200 but this is still a fraction of the price of the other units using a similar technology.

When the Side Shot came, it was simple to set up. There are two clamps to attach to the scope, these are 25mm and 30mm. These allow the Side Shot to attatch onto the back of the scope. Once fitted, I slid it on and attempted to fit my phone. Some adjustment was needed before it would go in, which would be a good time to say that this will fit any normal sized phone.

This is a fantastic selling point, meaning different adapters aren’t needed for different phones. With some twists and turns of the adjustment knobs the iPhone was fitted. I turned the camera on and soon noticed a problem; The mirror had been smashed in shipping, rendering this product useless. A quick E-mail later and I was sent a new mirror, which was fitted with ease. Brilliant customer service! Now I was ready to head out to the fields and bag some pigeons, without having the hindrance of a normal scope cam system or tripod set up.

Upon arrival, I had a quick glass with my trusty Leupold binos. I love this way of spotting pigeons who might be tucked away in ivy and nestled behind twigs. Binoculars give a great field of view, far better than a rifle scope. They also brighten the image, which makes spotting potential quarry far easier. I could see a woodie tucked in tightly to the main trunk of a willow tree, approximately 150 yards from my current position. Knowing that there could be a very good chance of a shot, I fitted the Side Shot, as was keen to capture my first kill on the new mount.

I ducked into the hedge and slowly began to make my way forward. My camouflage consisted of a cap, a U-Back British Army shirt and a hoody. Normally, I would have my face veil, but that had gone walkabout, so I had to make do without. As the Air Arms S400 DIY ‘super target’ did not have a sling, I had to carry it. A disadvantage of the scope cam is that it adds a lot more weight to the gun, not really a problem when it’s a light S200 fitted with a sling but this setup was a little too bulky and heavy for sling-less hedgerow stalking.

A different rifle choice next time I think. I had stalked over to some farm sheds, which provided great cover to allow me to tinker with my new toy before I took the shot. The sheds were just about within range, I only had aim points out to 45 yards, as this is my main HFT rifle, so with the pigeon at a lased 47 yards, I thought I would just about cope. Turning the phone camera on and focusing on the crystal-clear crosshairs of the Optisan EVX 10x, the picture was great!

With a simple push of the record button, I was away and just had to pull off the shot. The seated position was my best bet, as this is my most stable, with this fully kitted out target rifle. A Mil-Dot and three quarters was needed to put this hunt to bed. The slightly heavier than preferred trigger was squeezed before it came to a crisp stop as it reached the end of the first stage. With a little more pressure applied to the pad of my finger, a loud crack echoed in the sheds as the Air Arms Diablo pellet cut its way through the air to impact the pigeon in the neck.

It tumbled to the ground and lay at the base of the tree without a twitch. Knowing the pigeon was dead, I turned to reviewing the footage captured on the iPhone camera. Towards the start of the video the picture was blurry and not good enough for use on the channel. Thankfully however, it focused up just before the shot was taken. Maybe an app that locks the camera settings would be something good to look at for next time?

I stayed in the same position for another 15 minutes, in which time another pigeon had flown in. It was higher than the last bird and I could not see it clearly from my current location. I stood up, where I had a better view. Using a metal upright coming down from the shed as a rest, I shouldered the rifle and turned on the camera. With the Scope Cam adding height to the top of the scope, I was unable to wear my hat, so I tucked it in my hood and lined up the unsuspecting pigeon.

The range was the same, but the angle was different. I took off some holdover and placed my 45-yard aim point on the pigeon’s head. Once again the bird dropped, with more flapping this time due to the headshot destroying the nervous system, so causing this frantic commotion. It was dead though and that’s all that mattered. I left the birds where they lay, deciding to collect them at the end of the day. I continued my walk and stalk around the 5-acre field. There was a lot of pigeons in the air passing over and it felt like it could be a fruitful day.

I crossed the brook and headed up a short bank, offering a good vantage point and occasionally the opportunity for a long-range pigeon in the wood. As I came to the brow, I saw nothing was on the field. Not surprising for this time of day, because the birds are usually roosted up after feeding. There was however, one up in a hawthorn tree. I moved in closer, again, using what little cover I had to my advantage. I walked close into the hedge to try and mask my shape. I was getting closer and closer in.

This was such a still day and the drifting breeze was a sedate 5mph, so I stayed where I was at 45 yards. I kneeled for the shot on the damp and muddy ground, rather than sitting down. The bird was facing away from me, so I had a clear shot at the heart and lungs through the shoulder blades. Not wanting to waste any more time, I let the shot off. A loud ‘crack’ came back as the pellet struck the pigeon. It rolled forward, not raising a feather. Pleased with my shot, I went to check the footage, immediately realising I didn’t have any, due to the fact I never turned the camera on! Schoolboy stuff! I had to laugh; not to worry, there’s always next time!

Birds in the hand

I collected the pigeon and saw the shot placement was perfect, why can’t it be this good in competitions? I headed back to retrieve the others, happy with my short outing. As I casually strolled back, I came around the side of the shed and froze. With the distractions, I never considered the possibility of more pigeons being in the location I had left just 20 minutes before.

There was a bird on the grass, it was moving away, and its attention was not on me but on dinner. I slowly raised the rifle and made sure I turned on the camera. The bird was moving around a fair bit and I needed to wait until it was still. Soon enough it stopped and stuck its head right in the air showing off that brilliant white bar on its neck. At a simple 25 yards, a standing shot was on. I went for the headshot as the bird was so still. Before it knew what had happened it was doing backward rolls in reaction to the 8.4-grain pellet impacting its skull. With four birds now on the ground I called it a day. Once gathered up, I plucked the pigeons and whipped the breasts off ready to take to a local centre to feed to their birds of prey.

The Side Shot performed well, capturing some great shots without me having to look through a screen or carry a tripod. The asking price is still not cheap and the whole unit is made of plastic. A sturdier aluminium design would be something I would like to see in the future. Perhaps the materials will be improved, or the price reduced, if more are produced and sold.

I would still describe myself as a happy customer and the owner of a very well designed and practical product. Does it enable me to capture film without hindering my hunting experience? It certainly helps. Contact; www.side-shot.com