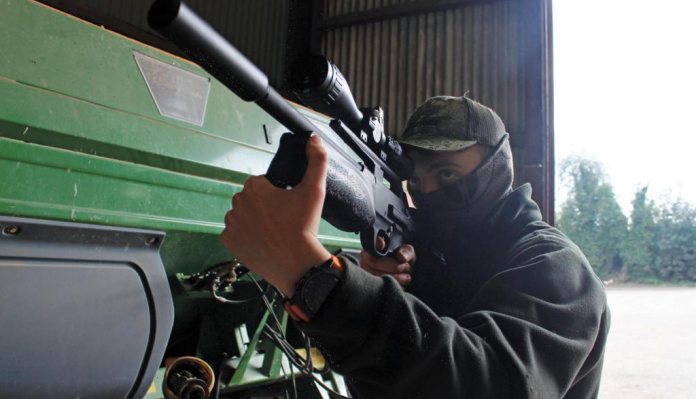 Permissions are the veins of my shooting blood supply. Several of my permissions have come from people I know outside of shooting. I am a member of Mercia Fell Running Club, which has over 150 members. These include farmers and landowners. As you can imagine, it didn’t take long for people to find out about my shooting and I started getting messages of interest in my services and asking what I charged. Of course, I charge nothing, which made them even keener. Some farms were a little far for me to travel. There are members all over the Midlands, but many are local. One guy lives only 15 minutes down the road. Perfect! He told me that he was overrun with feral pigeons on his cattle farm and he really needed some help and I was more than happy to pop over for a look.

I rolled up on a sunny Saturday morning and he led me around the hot spots. Typically, there wasn’t much about (isn’t that always the way?). There were still a few to go at, so my plan was to clear out the birds that were there and then sit tight in a prime location and wait them out. The farmer said that was probably the best way and left me to it.

My weapon of choice for this mission was the .177 Walther Reign. It’s short, compact, accurate and pretty hardy for the mucky and hard farmyard. On top, was my Hawke Airmax 4-12x44, I’ve found it’s pretty much ideal for all situations, so why go for anything else?

I began to walk around the buildings anti-clockwise, which allowed me to stay more concealed when looking round the corners of the sheds. If a shot presented itself, I could even slide the rifle in between the building and the drainpipe. If I was left handed, I would go round clockwise. I went pretty slow, making sure to scan every little nook inside the sheds and on the roofs. So many times, I’ve missed opportunities due to being too rushed and not thoroughly scanning everywhere properly.

Ferals can hide in the strangest of places. My first bird was tucked up snuggly against the roof of a grain store. It probably had a good feed before flying up to settle down and crap in the feed below. It was sat on some steel tubing that was helping support the shed. I went in slow, being sure not to spook it. These pigeons are used to seeing people and hearing loud machinery around the farm, so I was pretty sure I’d be ok but didn’t want to risk it too much.

I was within range but didn’t have a rest and wanted a clean and easy shot, so a support was preferable. There was a JCB bucket a few yards in front, so I sneaked over and hunkered down behind it; rests don’t get much better! I lined it’s body up in the cross-hairs and settled the gun. There wasn’t a solid backstop to prevent the pellet going into the roof so great care of shot selection and accuracy was essential. Feral pigeons have far less on them than woodies, so body shots are best bets. The bird gets dropped cleanly and the pellet gets stopped at least enough not to punch a hole in the roof.

I squeezed the surprisingly good trigger on the Reign and the shot was away. The pellet struck it with a solid ‘thump’. It rocked back and landed in the grain. I needed to remember where the birds were falling, so that I left the farm cleaner than when I came. A good way of getting invited back!

I scanned each of the girders in the same shed and managed to spot another bird tucked up, right in a dim roof corner. It needed a little holdover down to being the whole length of the shed away. I brought out the Hawke LRF 400 to get a bang-onmeasurement. I needed to give 1 mill dot holdover for the 38 yards of pellet travel. It was a really dark shot, illuminated crosshairs would have been helpful but I made do with what I had. With no wind, I let another shot go and it connected with the target, which dropped onto the grain.

With the only two pigeons in this shed down and nothing else visible, I decided to move on to other buildings. I found this was the easiest way of going about it, clearing each as I went. The most productive location was surprisingly the one holding the machinery. There were at least five in there, all of which seemed pretty docile and not effected by my presence. The walls were thick and timber-clad, and the farmer said I could shoot at them (as he had done many-a-time). Because of this, I made the call to go for head shots.

They do a solid job. Either the bird is killed instantly or remains unharmed. In most cases, a farmyard feral will just sit tight allowing for another shot, so I rested up against the wall and steadied myself. They were all sitting pretty. I fi red and dropped one with a definite head shot. There was plenty of flapping on the ground to follow, which reassured me of a kill.

I swiftly panned the scope on to the next target, which was only a few feet away from the previous bird’s last perch. This one had turned its back to me and the head was concealed in its body.

In this case I chose a shot at the spine, knowing the pellet would travel through the bone and into the vital organs resulting in a swift and effective end. Before it knew what hit it, it was on the ground with the other. I carried on this way until the shed was clear of them. These birds cause all sorts of issues on the farm. They crap on the machinery and the acid in it causes the paint to corrode, leaving the metal work unprotected from the elements. Rust then sets in and drastically reduces the life of the equipment. Alongside this, they eat and poo in the feed put out or stored for the cattle, which is an obvious disease risk, which can’t be tolerated.

With all the sheds empty of pigeons, I needed to go to phase 2 of my plan. To sit tight with a clear line of sight to a roof, which I was told was a popular landing spot for the circling ferals. I tucked up in some undergrowth growing just to the side of some corrugated tin sheeting. This would help cover up any movement that I would have to make getting into different positions.

It wasn’t long before the first group landed. When pigeons initially come down, they can be on edge and far more skittish than when they have had a feed and go up to roost. I carefully raised the rifle and found them in the scope. The shortness of the Reign really helps keep movement to a minimum. The roof top was 25 yards away so not much thinking was needed. It was a calm day, with the farmhouse chimney smoke going pretty much straight up and the surrounding dry grass was hardly moving, so I held bang on target. I watched the pellet fl y through the air, launching into the overcast sky before dropping down into the pigeon’s skull. It rolled down the roof, tumbling and flapping. The others took off, either spooked by the sound of the shot or the noise and disruption of what followed. I let it be and sat tight in hope for another opportunity.

The next bird wasn’t a feral but a rogue young woodie. I wanted this one in the bag, as it would be great in the pan, very tender with lots of flavour. It landed in a tree, over hanging one of the sheds. I checked the range. It was the furthest shot of the day at a cool 48 yards. Selecting to take these shots is loaded with responsibility. However, decisions are based on a number of things: personal ability (honest appraisal), conditions (wind etc), equipment (accuracy and capability of my rig), shooting position, presentation and type of bird.

Confident that all the above boxes were ticked, I gave two Mil-Dots of holdover and aimed centre mass. Young woodie bones are still soft and the lack of heavy meat means the pellet drives straight through. The bird’s breast was impacted by the Air Arms Diabolo Field, 8.4-grain pellet and it just toppled from the branch, landing handily at the door of the shed.

The day went really well, I spent a good 4-hours there and managed to build quite a bag with seven ferals and the woody. The Reign was certainly the right tool for the job. Anything bigger would have caused too much disruption and damage to the property. My running/farmer friend was more than happy with my results and has given me an open invite to return. The perfect outcome! He also tipped me off that there are a few rats doted about the chicken coup; so, it might be worth popping over one of the evenings with the night site.