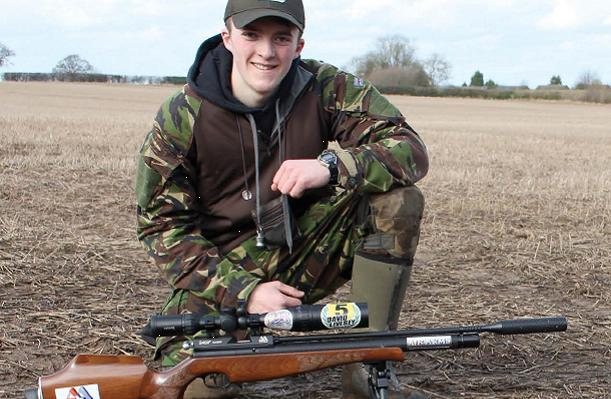 With all crops now taken and all the leaves off the trees, I thought I would try my luck and shoot a couple of pigeons for a warm winter stew. The location was one of my larger permissions, spanning over 500 acres. There are a good many of us who don’t tend to use all the land we have permission on. At least in my case, I stick to the ‘hot spots’ and don’t tend to venture where I am rarely presented a shot. The same was true for this occasion. I stuck to what I knew and popped into the small patch of woodland where I’d been successful in the past.

The rifle I chose for this mission was my ever-faithful Air Arms S400 Classic, which is now my go-to Hunter Field Target (HFT) gun, paired with the Hawke Air Max 4-12x40. This is easily my favourite budget scope. The ‘Christmas tree style’ reticle is ideal for my needs, but not so complicated as to confuse the eye when lining up on a target. The glass is crystal sharp with very minimal distortion around the edges and the light gathering capability in low light is extraordinary.

I have a new set of Sportsmatch 25mm lows on their way in the post and will be glad to replace my very cheap and to be honest, poor quality unbranded mounts that will be gone very soon. Truth is, we get by with equipment, but at the end of the day; quality will out, so I’d encourage you all to buy the best you can. One thing I don’t often use (but did on this day) is a silencer. This one is the dedicated S400/410 model from Air Arms. Generally speaking I find they make the set up feel a little too long, especially when using the full length Classic version of the rifle, but as it was such a still day, I didn’t want shots echoing around and emptying the entire wood.

The ground underfoot was very noisy and demanded more care than usual, with branches and dry leaves everywhere. Some ‘autumn-into-winter’ days release a particularly woody smell, as the leaves on the ground begin to settle and melt into the earth. I drifted though the wood, attempting to be as gentle and silent as possible (not easy this time of the year). Every now and then I paused to listen out for any tell-tale sounds. To be more specific, scratching of claws on tree bark, that’s what gives squirrels away most of the time, or a flap of a pigeon’s wing.

Everything was quiet, so I continued on my way. It wasn’t long before I had gone straight through the middle of the wood and come out the other side. Surprised and disappointed that I hadn’t come across anything to shoot, I set off for a walk up the side of the wood. It was here that I noticed a large number of mixed birds over the other side of the field. I looked though the scope and saw crows and jackdaws, pigeons and doves. They were much too far away to shoot, and a stalk would have been a waste of time. There was no cover between me and the birds, which would have meant a tiresome and probably fruitless 400-yard crawl. I was hungry for a potted pigeon but not that desperate!

Walking along the outskirts of the woodland, I noticed a woodie on one of the branches of a silver birch that was overhanging the track. It was facing away from me, so I opted for a heart and lung shot, right between the shoulder blades. I prefer that shot from this angle and nine times out of ten, they drop cleanly for me. With heart and lung shots from a forward-facing position, there is a risk of too much meat to penetrate and if the pellet does make it though, it’s then got to punch into the breast bone and vital organs, which is a lot to ask from a sub 12 ft/lbs air rifle.

I crouched down for a kneeler. As the angle was fairly steep I had to rest my elbow on my knee. Not the most stable position in the world but as the intended target was only 20 yards away, it was more than adequate. I released the shot and the small pop from the silenced S400 didn’t even disturb the song birds that were foraging further up the track. The pigeon just rolled forward, not even flapping its wings and dropped to the woodland floor with a soft thud. With one bird on the ground, my options opened a little. The field to my right had not yet been ploughed and looked like a good opportunity for some decoying. It is very late in the year to be attempting this but spotting the birds on the field earlier on, gave me hope that it could work.

Handily for me, there was a strip of sweet corn not harvested, which would act as a perfect natural hide for me. I laid out the pigeon on what was left of the stubble at 20 yards. This way, if a bird came in 20 yards further than the decoy it would still be in range. Once the decoy was set it was just a case of waiting. I was in the prone position for maximum cover (it was also the most uncomfortable position to be in for extended periods). My gun was set up on my Spartan Javelin bipod, which I always keep tucked in my pocket for occasions like these. Just have to say the ability to fit or remove it as required is an excellent feature of this lightweight yet practical design!

About half an hour went past and I still hadn’t seen anything; maybe there was a reason no one decoys at this time of year. My back was starting to ache, and impatience was setting in. Just in the nick of time, a pigeon swooped in from over the wood behind me and settled next to my decoy. It was side on and its neck was out stretched showing the brilliant white bar. It appeared uneasy and aware that something wasn’t quite right. I knew I didn’t have long. The bird was side on, I went for a heart and lung shot once more. The rifle was solid on its rest and I had no trouble letting of a quick shot. The pigeon rolled around a bit and I was not sure if the shot was a little too rushed. I was pretty sure it was dead, and the flapping was just nerves, but I cycled the bolt and put another one in him just to be on the safe side. I broke cover to set up this one up as a second decoy.

The walk was good for me, as it allowed me to have a good stretch and refresh myself for another stint of lying in the dirt; sometimes you take the shots and cover you get given! I wasn’t there too long, and I heard a commotion from behind me. It sounded like magpies and Jackdaws having a fight over something. I didn’t want to turn around because I could hear they were close and any movement from me could spook them. This turned out to be the right call. A jackdaw came down and started hopping around the decoys. Although they are quite pretty birds, they are a real nuisance and don’t do the local song bird population any favours!

They are bullies, and much like the Magpie they will rob other bird’s nests. Not only this, if they get near the grain stores they can eat their way through an awful lot, so costing the farmer money. They also defecate in and around the grain, making it unhygienic for livestock. They really are a pest on the farm hence why the farmer is so keen for them to be shot. I went for a head shot on this bird. (Although the head is probably the biggest and easiest target to aim for, it is still a relatively small). There may be less meat to penetrate due to its slight build but the side-on head shot seemed the surest option. The pellet struck with a popping sound and the Jackdaw lay on its back with minor wing twitches. I broke cover for the final time to collect the three birds. Although Rook tastes good, I don’t fancy jackdaw and gave it to a very inquisitive and appreciative farm cat instead.

I now had three birds on the ground and enough pigeon to make a meal. As time was once again getting on, I headed home with one thing on my mind. Pigeon stew!!