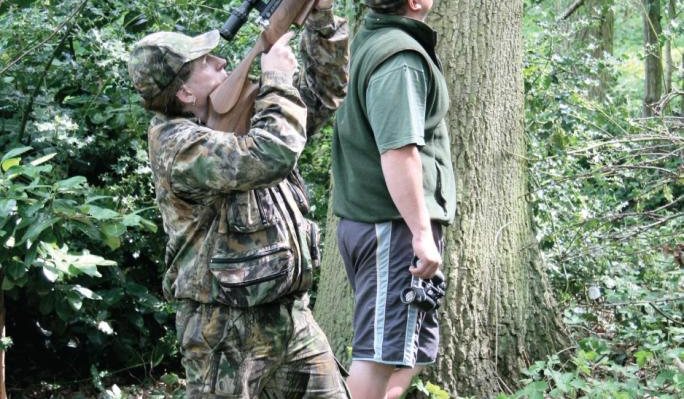 When fired from a 12 ft/lb air rifle or an FAC-rated gun, all of the four major calibres have their uses.

But, in relation to the latter air rifles, we need to be sensible in the power levels (especially for ‘smaller’ calibres) and realise their limitations too. A rule of thumb being that smaller calibre FAC air rifles usually run sweeter at lower power levels, which is mainly due to pellet weight not coping with the higher speeds generated. So it follows, that although the larger the calibre, a heavier-weight of projectile and higher power rating can be used – either way the rifle often becomes more specialised in its usage. Those statements may seem I’m erring on the side of caution, but rather I hope they’re seen as the most sensible way to look at the FAC air rifle.

With the mega-hi-power ‘Super-airguns’ now available – what better time to present the much misunderstood .20 calibre as an example of a ‘specialised’ FAC air rifle. Even at 12 ft/lb many feel it has almost mystical properties, it doesn’t, but it does have pluses and downsides like any other.

In past Airgun Hunting articles, I’ve featured my much favoured .20” calibre, 22 ft/lb FAC Daystate AirWolf. It has proved itself shooting Blue Hares in Scotland and tricky brancher shooting in the Black Country. However, I’ve often been asked why I choose the .20 over my .22 calibre FAC air rifle for specific ‘tasks? Well, this article I hope will explain why it’s often the optimum weapon of choice, rather than my more powerful 30 ft/lb Custom Theoben Rapid .22 I own.

Having two ‘similar’ calibre FAC rifles at my disposal isn’t as ‘strange’ as you might think, as there’s a considerable difference in power output. Also, ammo choice plays a big part in performance. But of even more importance is efficiently harnessing the power at your disposal, without sacrificing accuracy or the pellet’s ballistic coefficient (BC). Put simply, the BC of the projectile is how well it cuts the air, which will have an effect on speed, trajectory and terminal energy. Once calculated you can then apply this to your zero points on your scope set up, which will allow you to get the best out of your hunting combo. OK, with the round-nosed pellets (regardless of calibre) hunters use, the BC will not be as high as a pointed/ boat-tailed bullet of a centrefire rifle. But shape, weight and design will still make a big difference, even in the lower powered world of airguns.

Pellet choice in .20 calibre is quite limited; personally I’ve found JSB Exact Diablo suit my rifle best – initially using the original versions, which were slightly lighter than those marketed now. I mention this, as they now weigh 13.73-grains but perform just as well. Also, choosing the zero for an FAC rifle is a much debated and contentious subject – generally on the whole I feel many set an unreasonable zero point in terms of distance. Experience has also shown me that altering your set zero to suit a particular hunting situation can have a dramatic effect on how more useful and versatile the rifle can be, as the following hunting examples illustrate.

For instance, in the Blue Hare challenge I met in the Highlands of Scotland, I spent a long time almost ‘rehearsing’ with my combo and certainly deciding a set zero. I didn’t use ‘software,’ it was done ‘old school’, with targets set at 5yd intervals from various zero points. Also, shooting on different days in different wind and weather conditions. It’s only in these situations you really do begin to realise any FAC air rifle isn’t a ‘magical wand’ to long range success! I’d never shot over terrain as rough as the ground of the high glens, thankfully the Gamekeeper who helped me attain my goal suggested I shoot over Peat Hags on terrain nearby, both along the straight and at angles on targets set on higher or lower ground. Only then did I fully realise the effect different terrain and indeed water can have on a pellet’s trajectory.

I eventually decided to lessen my zero to 40yd, finding it to be a much more sensible and predictable option for the conditions.

Many will think that close but there was wind to contend with, plus other variables including possible angle of fire. My selfimposed cut off point on a perfect day was 75yds. Not far? Well you try it when the wind can swirl back on itself, and then the ground between you and the target drop 60yds or more. Plus, include water in the equation and angle of fire as well… Getting a little more than tricky isn’t it? Granted, this was an extreme hunting foray over the harshest of terrain but without doubt only a properly set-up FAC power air rifle, used correctly, would have coped in these conditions.

At risk of stating the obvious, power is useless unless you hit what you are aiming for. I feel another brief recount of a hunting foray at the other end of the scale in relation to terrain and weather conditions will illustrate this. I was invited for some brancher shooting with some airgun hunters of my acquaintance. The Gamekeeper’s brief to us was a simple one; ‘get enough rooks for the pie.’ Before the trip, I’d noticed at that local rookeries the trees were far more advanced in leaf than they normally would be back in the day. Yes, the days when it was like shooting fish in a barrel – as the branchers clung onto almost bare twigs near nests high above, are gone!

On arrival, as expected, the trees were in full leaf, the canopy above was so dense in parts you could hardly see the nests never mind branchers! Even the keeper, who was spotting for us said: ‘if this isn’t a sign of climate change, then what is?’ The reason I took the .20 Cal AirWolf was simple. I knew the branchers would soon wise up and use foliage to hide behind, thinking if they couldn’t see us, then we couldn’t target them. The airgun hunters with me that day are crack shots but with only 12 ft/lb guns the chances they got as the birds wised up soon dwindled to almost none.

The birds were really twitchy and wised up after only a dozen or so shots into the session. At times, I could smash through a few leaves and very small twigs, to bring down the crafty wannabe rooks. I was disciplined in the shots I took and if I knew it wasn’t going to be a definite hit, I’d send one to the side, which would often shock the brancher to show itself and then in an instant another shooter would get a chance to bag it. The zero I set for this situation was 30 yds, but for the predictability of trajectory in this situation I could aim bang on and be sure of a clean kill, even taking steep and awkward upward angled shots.

Nothing had changed in terms of the familiar crick in the neck and aching back from continually looking up and taking high shots. What had changed was due to my firepower and considered rifle choice and set-up my tally accounted for two thirds of the bag.

If you still think FAC air rifles the lazy option, then finally consider this. While shooting over a local ‘duck pit’ at pests nicking grain left out for the waterfowl, another airgun shooter couldn’t believe my success rate. He was a good shot but was using a 12 ft/lb air rifle, and range wasn’t an issue. However, until you experience this phenomenon of having to shoot over an expanse of water it’s weird to then realise how this ‘medium’ can affect a pellets trajectory. Using my .20 cal FAC Air Wolf meant the pellet had enough ‘oomph’ to glide ‘true’ over the water to hit anything I aimed for.

We should feel privileged to have these types of ‘specialist’ air rifles to choose from, much due to R&D from Daystate Ltd, as we can’t leave a subject such as this without thinking of the .25 Cal Daystate Air Ranger 80 and of course the Wolverine .303.

Those are very specialised’ FAC hunting and pest control tools. But choose wisely, as the FAC airgun hunter has a myriad of options and once fully accustomed to the ‘specialised specifics’ of your chosen rifle, you’ll discover a whole new world of airgun hunting.